What is IC Design?

Integrated circuit design, or IC design, is a part of a larger body of knowledge known as electronics engineering. In the discipline of electronics engineering, there is a process known as circuit design. The goal of circuit design is to assemble a collection of interconnected circuit elements that perform a specific objective function. The ability to add or multiply numbers is a simple example. The development of a microprocessor that executes computer instructions to perform complex tasks is another example.

Circuit design utilizes discrete, pre-manufactured elements to form the circuit. In the case of IC design, there is an important difference. Here, the circuit elements are made from miniaturized components that are implemented on a silicon substrate using a process called photolithography. The photolithography process creates various geometric shapes on the silicon substrate where the electrical properties of the region defined by that shape are altered. Basic circuit elements are created when these regions are combined and superimposed over each other.

So, IC design consists of two distinct processes. First, circuit elements are assembled to perform the objective function. Next, the various geometric shapes that implement those circuit elements must be assembled and interconnected on the silicon substrate. The first process is typically called logic, or circuit, design and the second process is called physical design. Based on the type of signal being processed by the IC, a digital or analog methodology is used. In the case of an analog/mixed-signal, or AMS, design, both methodologies are used. In addition, how the various circuit elements fit the requirements of the design is also relevant. When circuit elements must be modified to achieve the requirements of the design, a full-custom design methodology is used.

IC design is a critically important discipline. It forms the basis for the development of all microelectronic devices in use today. This includes the microprocessors that power laptop computers and cell phones, the image processing circuits that power computer monitors and television sets, and the sensors that are used in wearable and implanted medical devices. These microelectronic devices also allow the growing use of artificial intelligence (AI) that is opening new frontiers, such as autonomous driving, machine vision, and natural language processing.

IC technology deployment has become widespread in our world, and IC design forms the foundational set of disciplines required to create these devices.

Overview of the different steps in an IC Design Flow

The process of IC design can be thought of as a series of hierarchical decomposition steps. High-level requirements are decomposed into more details with the goal of implementing a circuit on a silicon wafer that faithfully performs the objective function. The primary steps that make up an IC design flow include:

When one considers advanced semiconductor technology, there is another aspect of the IC design flow that becomes important. In advanced manufacturing technology, physical effects and process variability play a major role. For example, the physical resistance of the wires that connect circuit elements can cause significant changes in operating voltages and, thus, overall circuit performance. The variability of the manufacturing process can also create unexpected circuit behavior. To deal with these issues, late effects such as wiring delay and process variation must be modeled and considered early in the design process to ensure these effects are accounted for.

In addition, some aspects of the design, such as how it will be tested and how much power it will consume, need to be modeled and refined at each step of the process. These items are too complex to be dealt with at the end of the design. This process of “looking ahead” is called a Shift-Left approach, and it requires a very sophisticated set of design tools and design flows to support it.

What solutions does Synopsys offer for IC design?

As the market leader in IC design tools, Synopsys offers a comprehensive suite of capabilities that is fully integrated and able to deliver signoff-quality results and support the sophistication required for Shift-Left design.

The Synopsys Fusion Design Platform™ delivers the full set of capabilities needed to design, verify, and sign off advanced IC designs. The platform is AI-enhanced and cloud-ready. Tools in the platform include:

The figure below summarizes the elements of the platform. 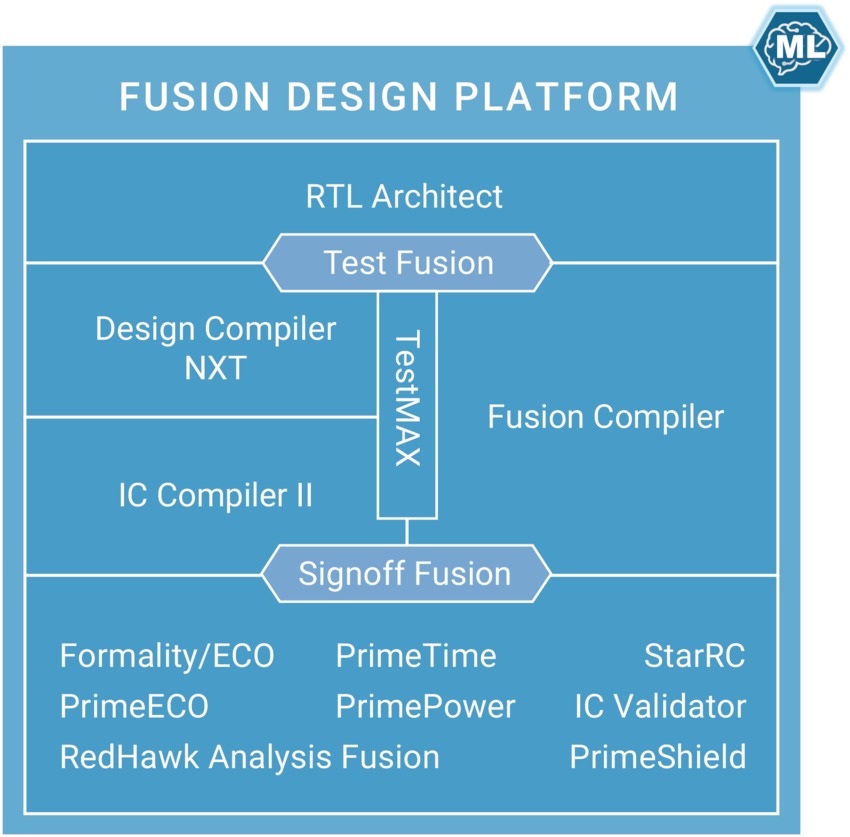