The 6 Levels of Vehicle Autonomy Explained

Researchers forecast that by 2025 we’ll see approximately 8 million autonomous or semi-autonomous vehicles on the road. Before merging onto roadways, self-driving cars will first have to progress through 6 levels of driver assistance technology advancements.

What exactly are these levels? And where are we now?

The Society of Automotive Engineers (SAE) defines 6 levels of driving automation ranging from 0 (fully manual) to 5 (fully autonomous). These levels have been adopted by the U.S. Department of Transportation.

Most vehicles on the road today are Level 0: manually controlled. The human provides the "dynamic driving task" although there may be systems in place to help the driver. An example would be the emergency braking system―since it technically doesn’t "drive" the vehicle, it does not qualify as automation.

This is the lowest level of automation. The vehicle features a single automated system for driver assistance, such as steering or accelerating (cruise control). Adaptive cruise control, where the vehicle can be kept at a safe distance behind the next car, qualifies as Level 1 because the human driver monitors the other aspects of driving such as steering and braking.

This means advanced driver assistance systems or ADAS. The vehicle can control both steering and accelerating/decelerating. Here the automation falls short of self-driving because a human sits in the driver’s seat and can take control of the car at any time. Tesla Autopilot and Cadillac (General Motors) Super Cruise systems both qualify as Level 2. 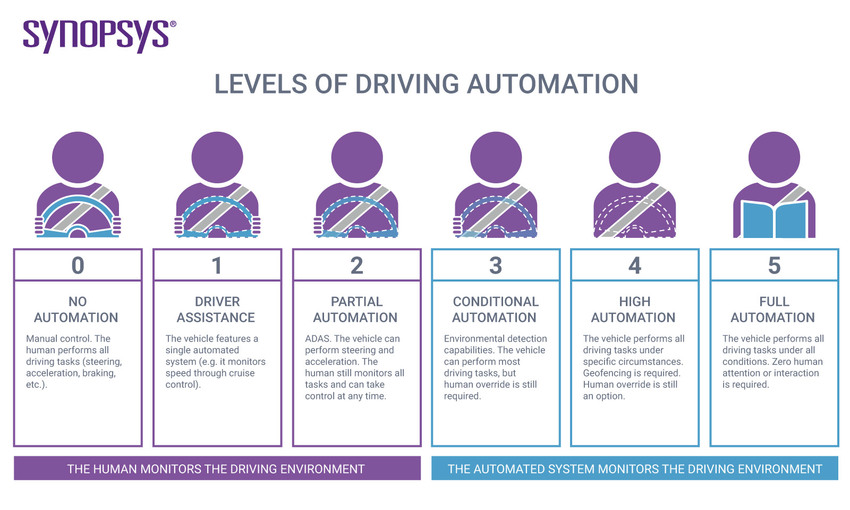 The jump from Level 2 to Level 3 is substantial from a technological perspective, but subtle if not negligible from a human perspective.

Level 3 vehicles have “environmental detection” capabilities and can make informed decisions for themselves, such as accelerating past a slow-moving vehicle. But―they still require human override. The driver must remain alert and ready to take control if the system is unable to execute the task.

Almost two years ago, Audi (Volkswagen) announced that the next generation of the A8―their flagship sedan―would be the world’s first production Level 3 vehicle. And they delivered. The 2019 Audi A8L arrives in commercial dealerships this Fall. It features Traffic Jam Pilot, which combines a lidar scanner with advanced sensor fusion and processing power (plus built-in redundancies should a component fail).

However, while Audi was developing their marvel of engineering, the regulatory process in the U.S. shifted from federal guidance to state-by-state mandates for autonomous vehicles. So for the time being, the A8L is still classified as a Level 2 vehicle in the United States and will ship without key hardware and software required to achieve Level 3 functionality. In Europe, however, Audi will roll out the full Level 3 A8L with Traffic Jam Pilot (in Germany first).

The key difference between Level 3 and Level 4 automation is that Level 4 vehicles can intervene if things go wrong or there is a system failure. In this sense, these cars do not require human interaction in most circumstances. However, a human still has the option to manually override.

Level 4 vehicles can operate in self-driving mode. But until legislation and infrastructure evolves, they can only do so within a limited area (usually an urban environment where top speeds reach an average of 30mph). This is known as geofencing. As such, most Level 4 vehicles in existence are geared toward ridesharing. For example:

How Audi Brings Smart Everything to Life

Level 5 vehicles do not require human attention―the “dynamic driving task” is eliminated. Level 5 cars won’t even have steering wheels or acceleration/braking pedals. They will be free from geofencing, able to go anywhere and do anything that an experienced human driver can do. Fully autonomous cars are undergoing testing in several pockets of the world, but none are yet available to the general public.

While the future of autonomous vehicles is promising and exciting, mainstream production in the U.S. is still a few years away from anything higher than Level 2. Not because of technological capability, but because of security—or the lack thereof.

Earlier this year, the Ponemon Institute published a report (commissioned by Synopsys) titled “Securing the Connected Car: A Study of Automotive Industry Cybersecurity Practices.” The report found that “connected” vehicles (like autonomous cars) are rich in physical safety features—seatbelts, airbags, antilock brakes—but not so rich in digital security features. When it comes to what’s needed for safe operation in an online world, connected cars are not yet ready for prime time.

The report is based on a survey of 593 security practitioners, product development professionals, and engineers. More than two-thirds of the respondents acknowledged that the need for better cybersecurity is “urgent” for obvious reasons: 62% said they think a malicious or proof-of-concept attack against automotive software/components is very likely in the next 12 months.

It’s fair to say that consumers won’t accept autonomous cars unless they are confident that they will be at least as safe as they would be on a commercial jet, train, or bus. That day is coming. But the automotive industry must get over a few speedbumps first.

How to Secure Autonomous Vehicles of the Future

Connected Vehicles: Why Security and Privacy are Both Trust Hurdles

What is an Autonomous Car?

Drive Innovation from the Inside Out