Advances in laser powder bed fusion (L-PBF) for additive manufacturing (AM) of metals enable the fabrication of highly porous cellular structures in the micrometer range and thus, in principle, coronary stents.

However, process-related irregularities pose a particular challenge, leading to a deviation in morphology and mechanical properties between the actual L-PBF stent and the intended stent (CAD model). Analysis looked in particular at the expansion behavior of the L-PBF stents. To further investigate the effect of these irregularities, a combined experimental and computational framework based on both actual and computationally reconstructed L-PBF stents was used.

"Simpleware ScanIP proved to be an efficient tool for reconstructing detailed L-PBF stent models and thus extending and deepening the knowledge gained from experimental analyses by realistic numerical analyses. In particular, the robust meshing algorithm enabled the generation of high-quality FE meshes that could be immediately used for structural mechanics analyses in the Abaqus FEA software."           (Lisa Wiesent, OTH Regensburg)

Laser powder bed fusion (L-PBF) stents were manufactured at FIT Production GmbH. Two post-processing states were considered for the analysis of the L-PBF stents: i) heat-treated condition, and ii) electropolished and heat-treated condition. µCT images were acquired of these stent configurations before the stents were compressed between two plates to determine their radial strength. In the original study, an as-built stent was further investigated (see Wiesent et al. (2020)).

The µCT data was imported into Simpleware ScanIP and segmented using the Flood Fill tool, accounting for internal porosity. By using morphological filters (erode, dilate, open and close) and applying a Boolean operation, a 3D model of the internal pores was also generated. Meshing of the stent models was also performed in the Simpleware FE module, producing high-quality FE meshes through the robust meshing algorithm. Subsequently, the stent models were imported directly into SIMULIA Abaqus FEA software for structural mechanics analysis, focusing on stent compression between two plates and stent-balloon expansion.

By comparing the numerically predicted compression behavior of the reconstructed L-PBF stent models with experimental data, the material properties of the L-PBF stents were inversely determined and validated. The process-induced irregularities led to an increase in the intended strut diameters and thus to an increase in the geometrically determined stiffness. Therefore, the numerical simulations based on the idealized stent model resulted in a significant underestimation of the radial stiffness, whereas the FEAs based on the reconstructed stent model successfully predicted the global macroscopic stent behavior under compression. Subsequent expansion analysis of the reconstructed stent models showed that electropolished and heat-treated L-PBF stents could exhibit comparable expansion behavior to conventional stents. However, critical local stress concentrations were observed within the L-PBF stents due to the morphological irregularities, for example, in the region of notches and locally reduced strut cross-sections. 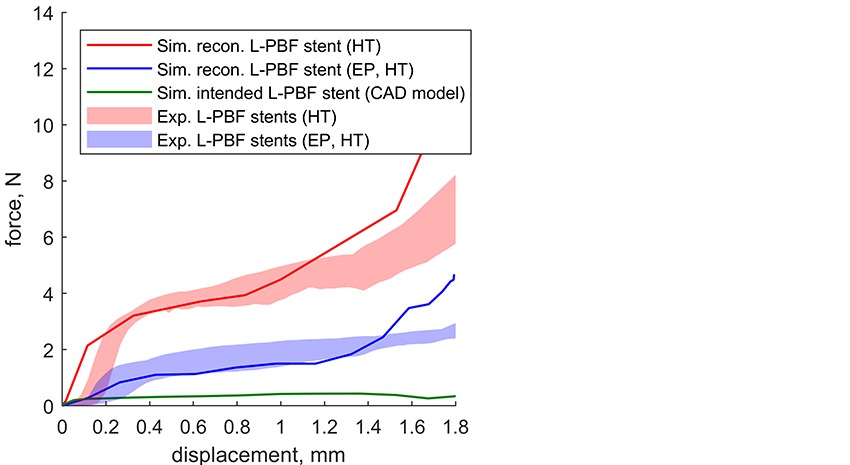 A validated experimental and numerical methodology was presented that allows comprehensive analysis of L-PBF stents after different post-treatment steps. It was shown that accounting for process-related irregularities, for example, by reconstructing actual stents from CT data, is essential to obtain reliable numerical analyses. The results of this work motivate further investigations in the field of L-PBF stents as well as quantification of thresholds of critical geometric irregularities, which are ultimately essential for establishing design guidelines for L-PBF stents/grid structures. Read the full paper Wiesent et al. (2020) on PLoS One: Computational analysis of the effects of geometric irregularities and post-processing steps on the mechanical behavior of additively manufactured 316L stainless steel stents.