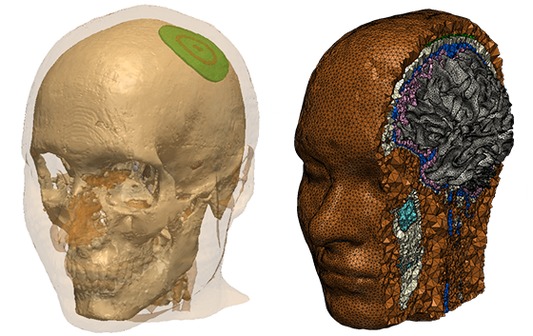 Epicranial cortical stimulation (ECS) is a novel neuromodulation technique that has the advantage of delivering strong electric field to the brain in a minimally invasive manner. To show the potential, computational modeling becomes necessary in order to evaluate electric fields within soft tissue. For this purpose, researchers at KU Leuven used Simpleware software to create a model of a real human head implanted with ECS electrodes and to generate tetrahedral meshes, which were exported to an external simulation software (COMSOL Multiphysics®). An important feature in Simpleware software is the ability to generate high-quality meshes with high density at the region of interest (ROI) which could produce accurate results in a cost-effective way. The results from this work were published in Frontiers in Neuroscience.

Cortical stimulation techniques have been shown as being effective for treating different pathological and psychiatric techniques, including both invasive and non-invasive methods. In terms of the former, direct cortical stimulation (DCS) requires a craniotomy to place electrodes directly over the brain. DCS produces strong neuromodulation effects, but at a higher risk to the patient. By contrast, transcranial electric stimulation (tES) is a non-invasive neuromodulation technique that passes a safer but weaker electric current between electrodes attached to the scalp.

Researchers at KU Leuven have developed a novel minimally invasive neuromodulation technique, epicranial cortical stimulation (ECS) to increase treatment effectiveness by placing the stimulating electrodes under the skin and directly on the skull. This research looked into ECS’s potential to deliver strong electric fields to the brain and used computational modeling to estimate the induced cortical electric field during ECS compared to tES and DCS. To do so, Simpleware software was used to generate a high-quality model of the human head with desired electrodes, which was then exported to COMSOL Multiphysics for simulating electric field distribution.

To generate the human head model, the detailed model MIDA (Iacono et al., 2015) was imported to Simpleware ScanIP. This model consists of 115 surface meshes representing different tissues being segmented from head scans. Using the Simpleware CAD module, the surface meshes were transformed into image-based masks and then merged to form the main five masks of interest: Skin, skull, cerebrospinal fluid, grey matter, white matter and air (see Fig.1). The masks showed some inconsistencies between the imported surfaces such as gaps, which appear as empty voxels between two adjacent masks representing tissue. These imperfections are unrealistic and can affect the mesh generation. To correct for this, holes were filled using the image processing tools in Simpleware ScanIP. 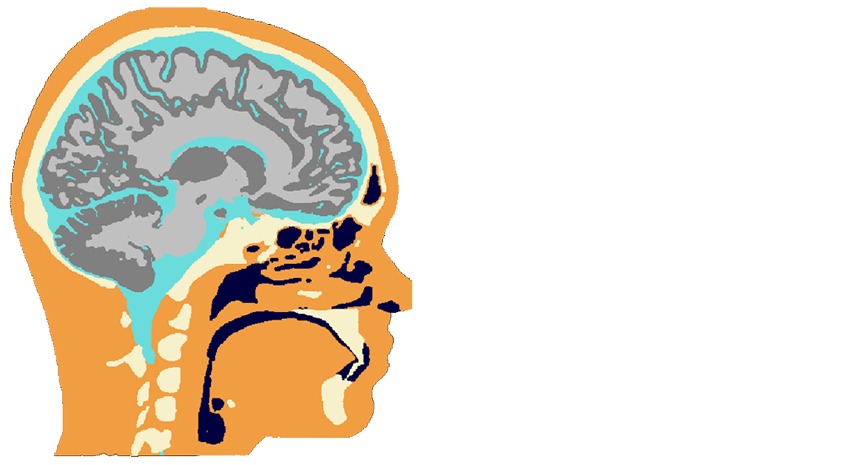 The ECS electrode consisted of a central disk and ring electrodes with an insulating back layer to prevent current from passing through the skin. The electrode layer was first modeled by dilating a copy of the skin mask using the Simpleware 3D editing tool, and then applying the Boolean operation tool to keep the part of the mask intersecting with skin. 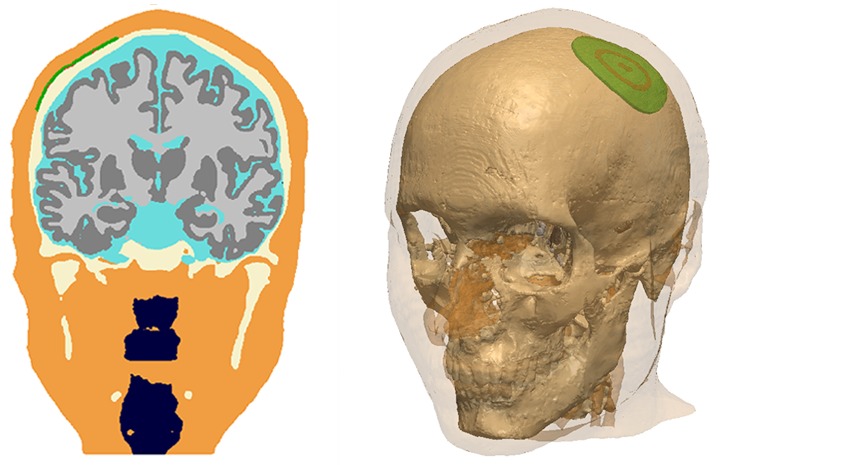 After building the model of the human head and the electrode, the Simpleware FE module was used to generate the tetrahedral meshes (see Fig. 3). To achieve more accurate results, the number of elements of the tetrahedral meshes in the area surrounding the electrodes was increased. This very useful function improves the accuracy of the model results while maintaining reasonable data quantity and simulation time. 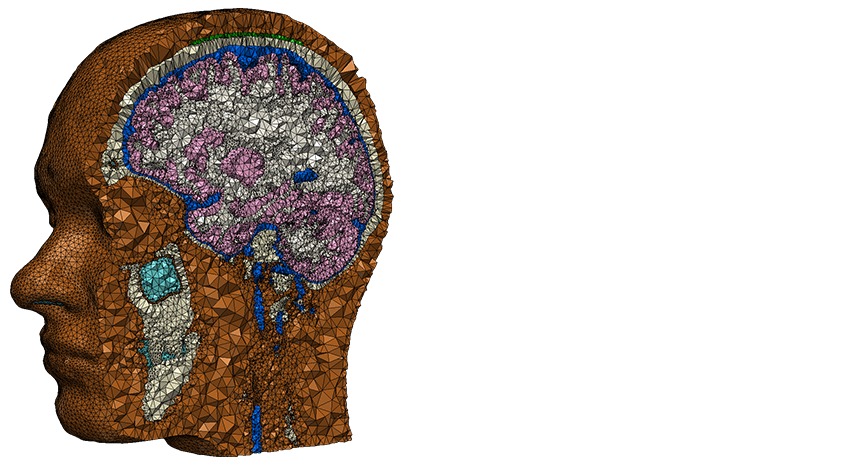 Figure 4: Simulation results from COMSOL showing the electric field distribution during ECS (left) and tES (right) when the same 1 mA current was applied. (Note scale bar limits) The results show a stronger and more focused electric field during ECS to that of tES

Epicranial cortical stimulation (ECS) is a novel minimally invasive neuromodulation technique that can deliver strong cortical electric field. This was shown using a computational model that was generated using Simpleware software and COMSOL Multiphysics. Such techniques can be used to stimulate different cortical regions and to treat a number of neurological and psychological diseases. The study’s results showed that the electrode configuration affects the electric field strength and focality in the brain. In order to achieve optimal therapeutic effects while avoiding unwanted side effects, future computational studies should focus on optimizing the electrode design in order to target a specific cortical region while avoiding the stimulation of other parts.