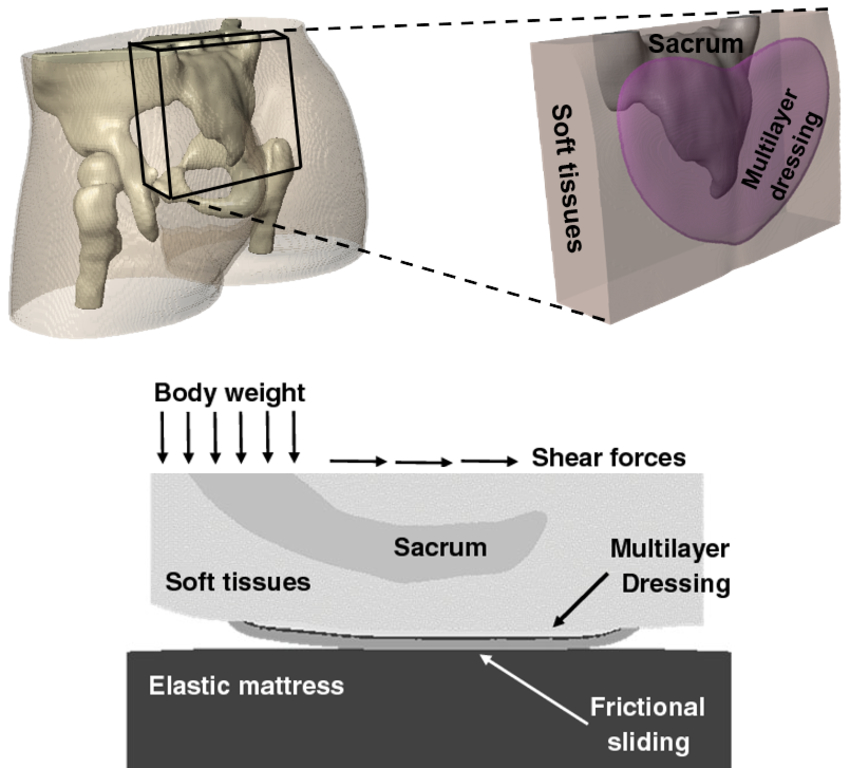 The sacrum is the most susceptible anatomical site for developing pressure injuries (PIs), including deep tissue injuries, during supine lying. Prophylactic dressings are generally designed to reduce friction, alleviate internal tissue shear loads, manage the microclimate, and overall cushion the soft tissues subjected to sustained deformations under the sacrum.

In this study, the authors developed a set of MRI-based, 3D finite element models of the buttocks using Synopsys Simpleware software, in order to investigate the biomechanical performance of prophylactic sacral dressing designs when used during supine lying or a 45° Fowler’s position on a standard hospital foam mattress.

The study was supported by an unrestricted educational grant from Mölnlycke Health Care (Gothenburg, Sweden)

76 T1‐weighted axial MRI slices were acquired of the weight‐bearing buttocks of a 28‐year‐old healthy female subject. Synopsys Simpleware ScanIP was used to segment the pelvic bones, femurs, skeletal muscles and soft tissues. Then, the model volume was to a 6·7 × 2 × 5·1 cm3 cube that captured the sacral bone and surrounding soft tissues, which is the relevant volume of interest (VOI) for this research application. Next, three layers of the tested prophylactic dressing were introduced, namely, a polyurethane foam layer, a non‐woven fibrous layer and an air‐laid layer, as physical layers in the modeling. Using the 3D editing tool of Simpleware ScanIP, the typical heart‐shaped geometry of the modeled dressing was introduced. 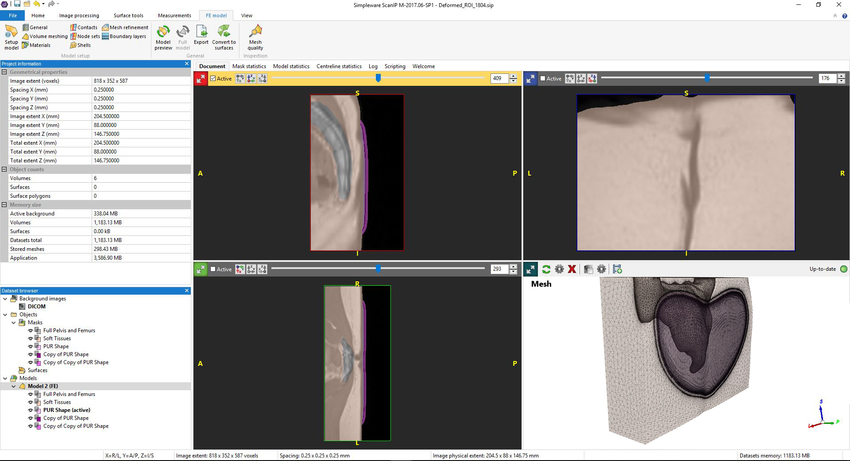 Simpleware ScanIP +FE was used to generate a 3D mesh for FEA. The model included 50,000 4-node linear tetrahedrons assigned to the different tissues, as well as 10,400 8-node linear hexahedrons relating to the flat foam cushion, and 245,235 4-node linear tetrahedrons assigned to the ACB cushion. The dense mesh of the cushion was needed to allow convergence. Simulations were set up using PreView (v1.8) and analyzed using the PARDISO linear solver of FEBio (v1.5.1), before being post-processed using PostView (v1.4). The runtime of each model variant took between 7 and 9 hours using a 64-bit Windows 7 workstation (Intel Core i7 920 2.57 GHz CPU and 12 GB of RAM). 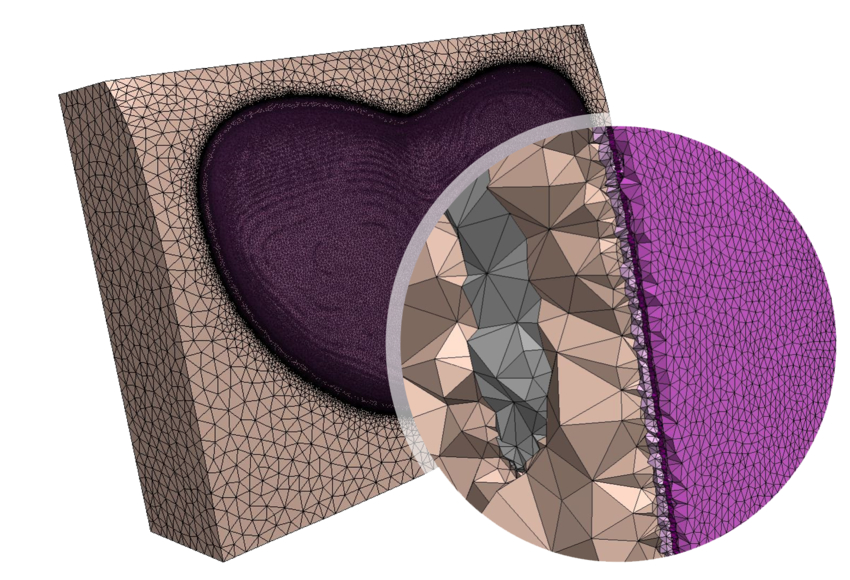 Simulations and Analysis of Results

Properties for tissues and dressing materials were assigned, including boundary conditions for simulating supine and 45° Fowler’s position weight bearing. The performance of the layered structure of the dressing was examined compared to a single-layer design. Healthy versus diabetic tissue properties were compared and dry/wet and isotropic/anisotropic properties of the dressing materials were considered. The FE compared effective and maximal shear stresses for the soft tissues as well as soft tissue exposures to elevated effective stress values. 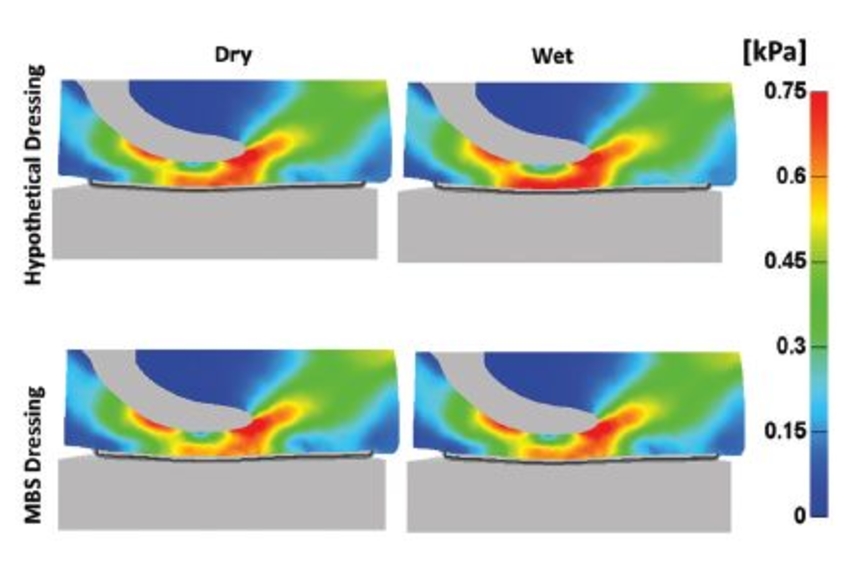 Illustration of the effective stresses in the soft tissues of the buttocks, in cross-section through the sacrum, with the hypothetical dressing (top) and with the anisotropic multilayer dressing (bottom), under combined compression and shear loading in dry (left) versus wet with 0.075 (mL/cm2) moisture level (right) dressing conditions.

Results demonstrated the obvious advantage of a multilayer structure, compared to a single-layer design, in soft tissue protection against PUs. Additionally, anisotropic stiffness properties of the dressing were found to be beneficial in minimization of soft tissue loads, especially when external shear is applied (in the 45° Fowler’s position). Furthermore, the dressing’s ability to maintain its anisotropic properties under wet conditions is crucial in real-world scenarios of soft tissue protection. 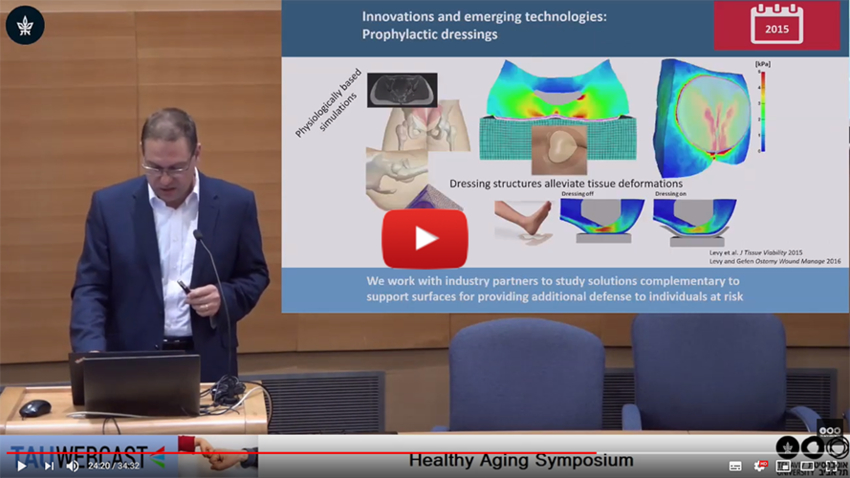