Internet data traffic capacity is rapidly reaching the limits of conventional fiber technologies. To combat this issue there has been a growing interest in Orbital Angular Momentum (OAM) multiplexing, a form of multiplexing that is based on distinguishing orthogonal signals using the OAM of electromagnetic waves. OAM multiplexing promises huge potential for growth in signal bandwidth through optical fibers; terabit transmission rates have been achieved using only a few OAM channels [4], and as the number of OAM quantum states is unbounded, OAM multiplexing can theoretically access a near-infinite number of channels that is subject only to the constraints of real-world optics.

A common OAM configuration is the so-called optical vortex. An optical vortex is a beam of light in which the light is twisted like a corkscrew around its axis of travel, with a zero of the optical field at the axis itself. Thus, when projected onto a flat surface, an optical vortex looks like a ring of light with a dark hole in the center. In addition to telecommunications, optical vortices offer potential applications in a wide variety of areas such as astrophysical optics and the detection of extrasolar planets, optical tweezers, optical trapping, laser beam shaping, and quantum computing.

An optical vortex is created by a complex phase-front structure, and carries an orbital angular momentum (OAM) in addition to its spin angular momentum (SAM). OAM carrying beams can be produced using different devices like spiral phase plates, computer generated holograms, spatial light modulators, or inhomogeneous birefringent devices called "q-plates". To date, most theoretical and experimental optical vortex work has been done in the visible region of the spectrum, however, the radio domain is also very important and more efficient devices are needed for these frequencies. In this application example, we describe the simulation of a q-plate working at millimeter wavelengths.

A q-plate can be imagined as an inhomogeneous Half-wave plate (HWP) with an azimuthal distribution of the local optical axis. One method of creating a q-plate is by cutting circularly concentric subwavelength grooves in a slab of normal dielectric material, as shown in Figure 1. Birefringent properties are created by this technique as light crossing these materials will experience different refractive indices depending on the polarization being parallel or perpendicular to the grooves. The groove depth & width, q-plate dimensions, and q-plate material are selected to produce an l=±2 q-plate optimized to work at 100GHz. The q-plate parameters are listed below

For ease of manufacturing, the q-plate is machined by cutting two sets of grooves @ 4.1mm deep into opposite sides of the nylon plate. If desired, etching a single groove @8.2mm deep on one side of the plate would produce a q-plate with identical optical properties. 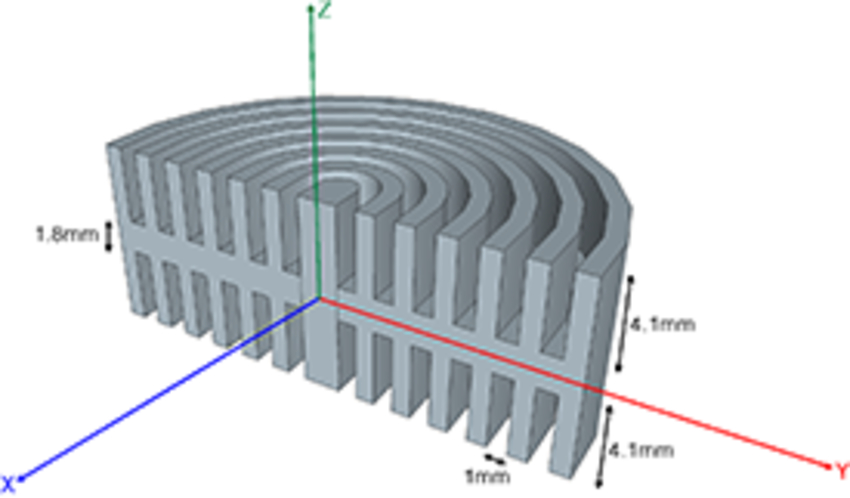 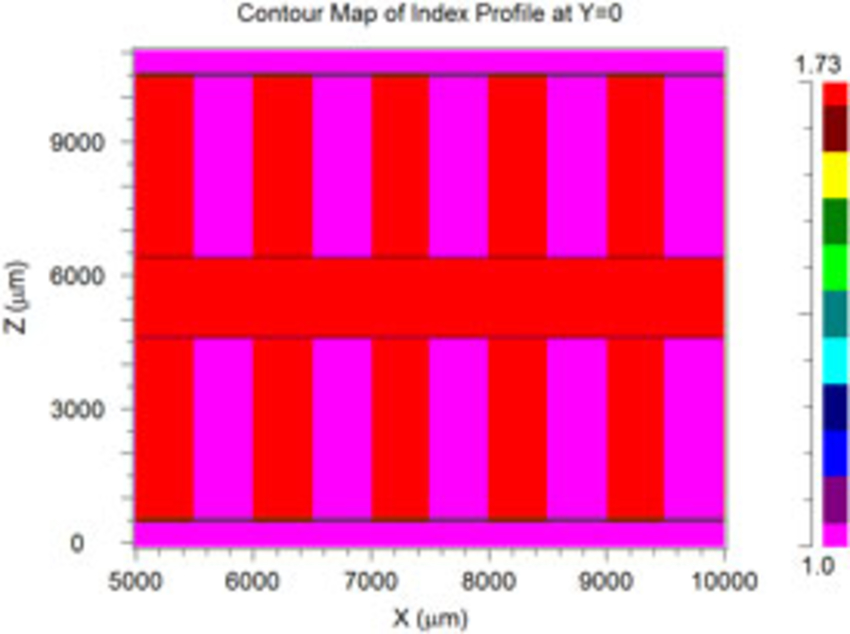 RSoft's FullWAVE FDTD-based Maxwell equation solver is used to rigorously simulate the q-plate structure. Due to the azimuthal symmetry of the Q-plate, we can use FullWAVE's Radial-2D option to simulate the Q-plate in significantly less time than it would take to do a full 3D simulation. The q-plate simulation setup is shown in Figure 2, the simulation parameters are listed below. 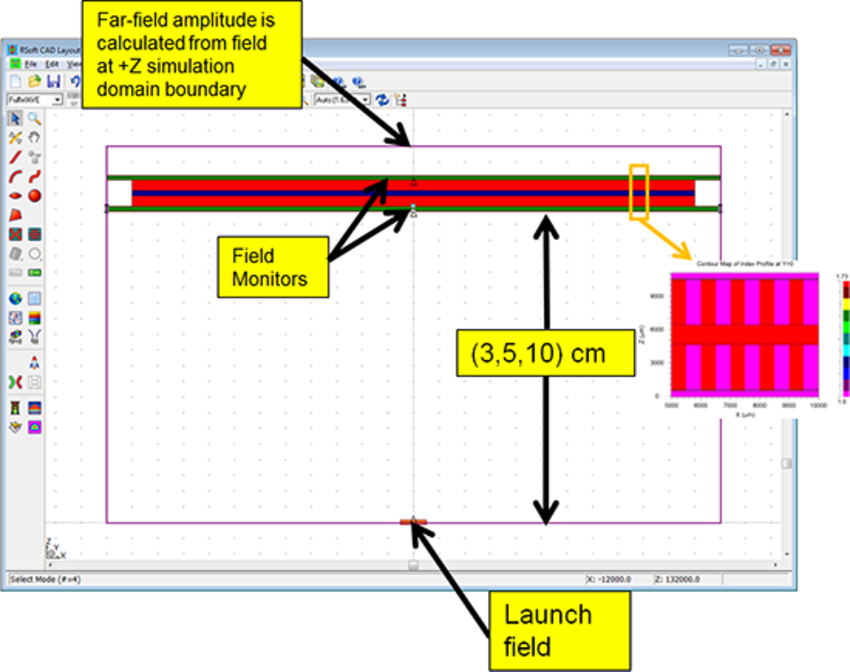 In this section, we discuss the results of the FDTD simulation of the q-plate structure. 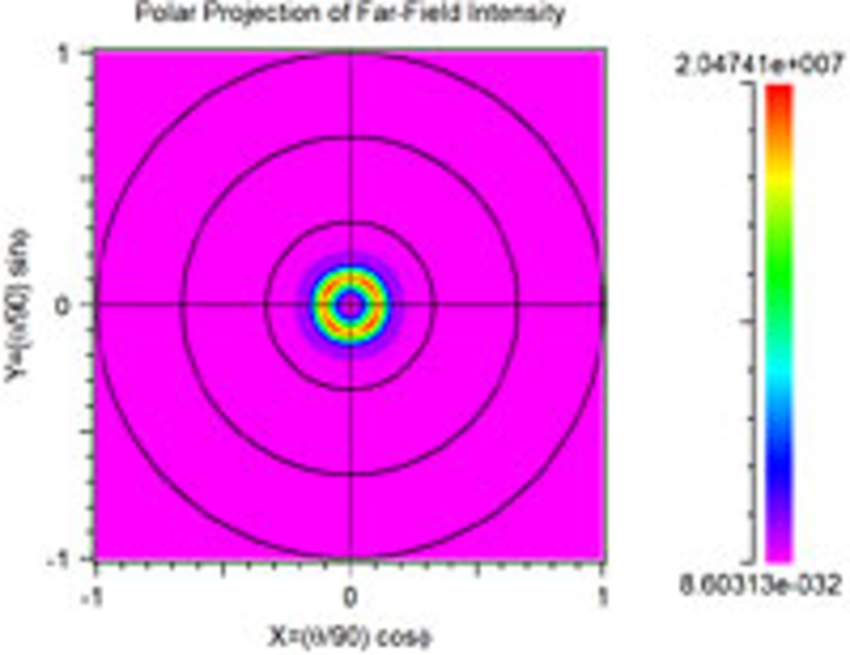 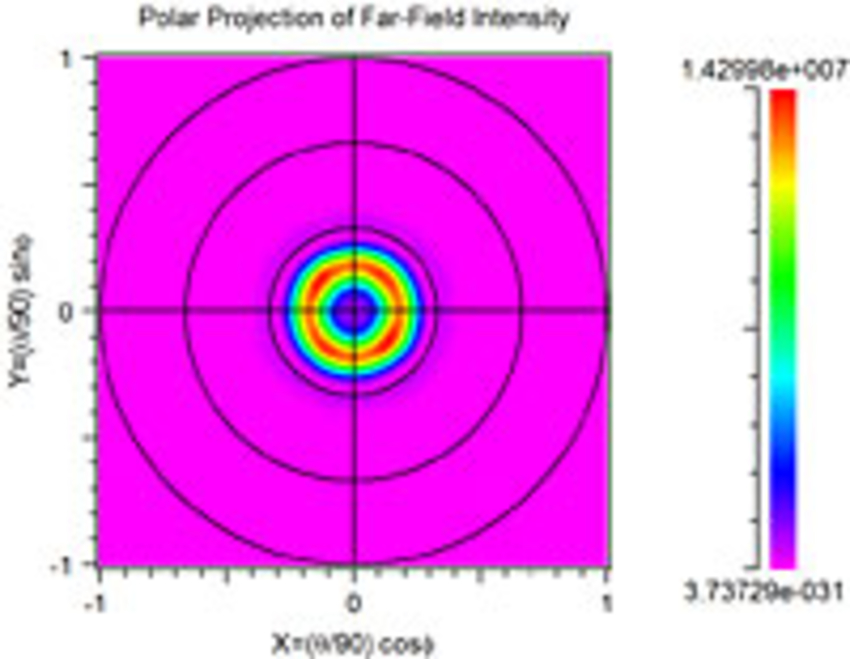 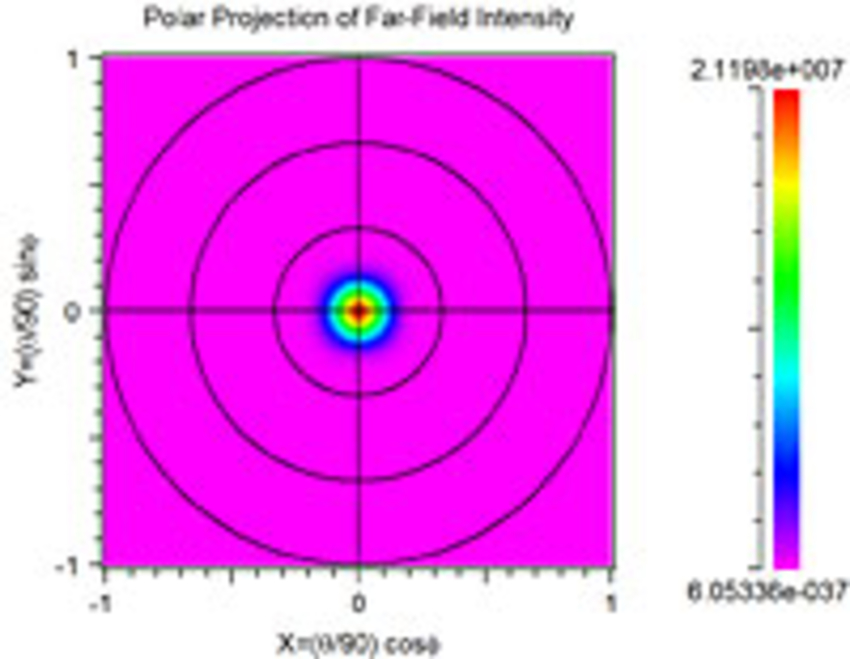 Spatial field monitors are used to verify the transformation of the incoming 100GHz RHCP Gaussian beam into a beam with l=±2 charged OAM. 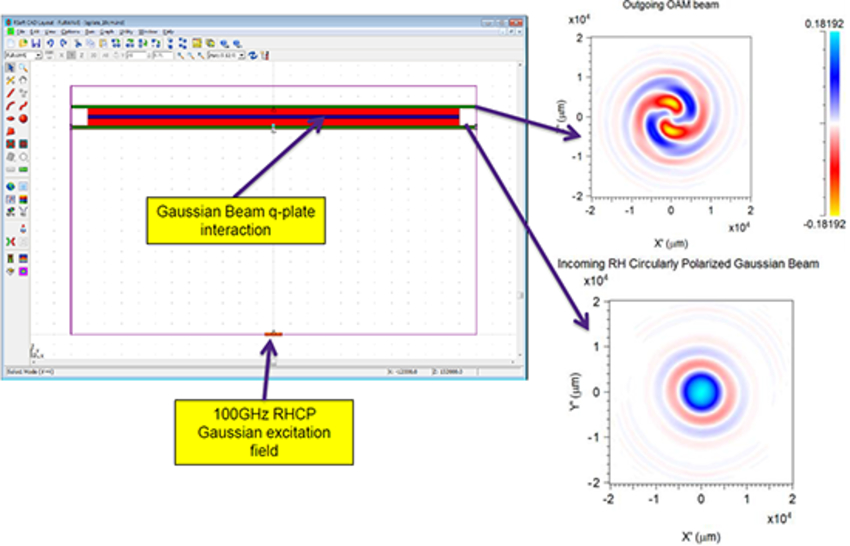 The q-plates's thickness, groove depth, and groove periodicity values are chosen so that the q-plate behaves as an inhomogeneous Half-wave plate. A HWP shifts the phase between two perpendicular polarization components of a light wave (Ex & Ey) by π; i.e., a HWP converts RHCP to LHCP and vice-versa.

To confirm the theoretically-expected HWP behavior of the q-plate, spatial Ex,Ey monitors are used to measure the Ex/Ey phase difference, allowing direct local measurement of the Q-plate's birefringent properties. Spatial field monitors measure Ex&Ey along z at several (x,y) positions as the incident RHCP beam travels through q-plate (Figure 5). The expected π phase-shift between orthogonal components of the field is clearly seen. Due to symmetry, the central ray passes through the q-plate without phase-shift. 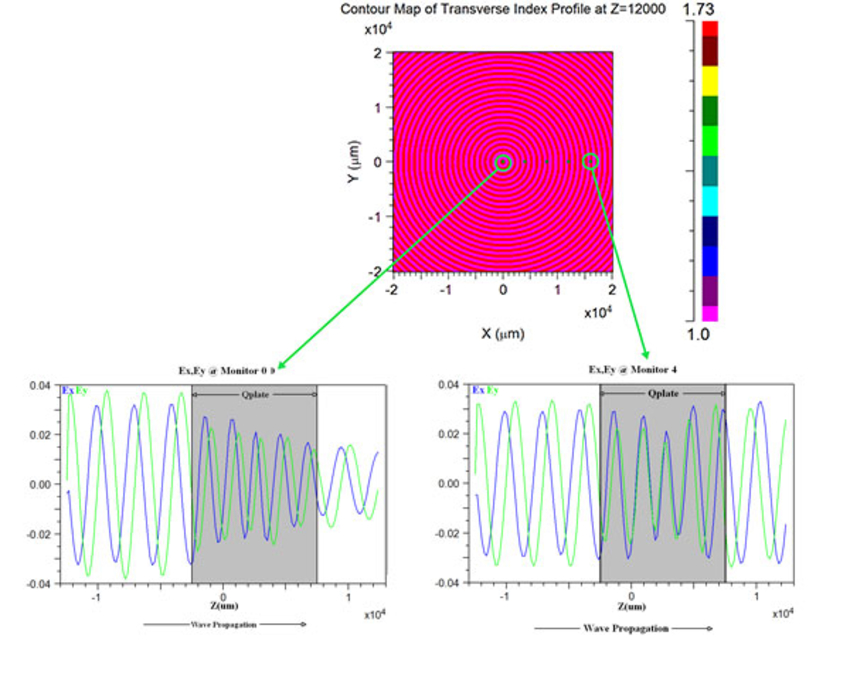