Because of its large bandwidth, ease of process, and relatively low cost, electro-optic (EO) modulators based on sol-gel are an attractive replacement to LiNbO3-based EO modulators. Modeling and simulation plays a critical role in the design & optimization of such devices. This application note will show how such a complex device can be decomposed into a few basic functional blocks, designed and optimized individually, and finally verified by using RSoft BeamPROP.

Shown in Figure 1 is the example structure to be used [1]. 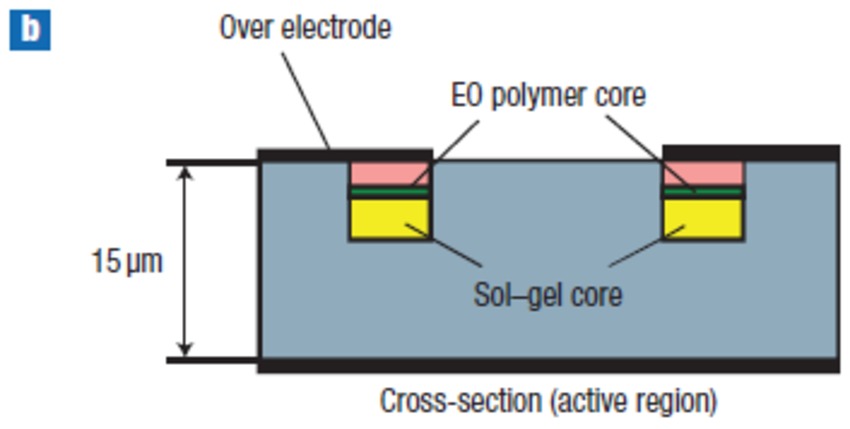 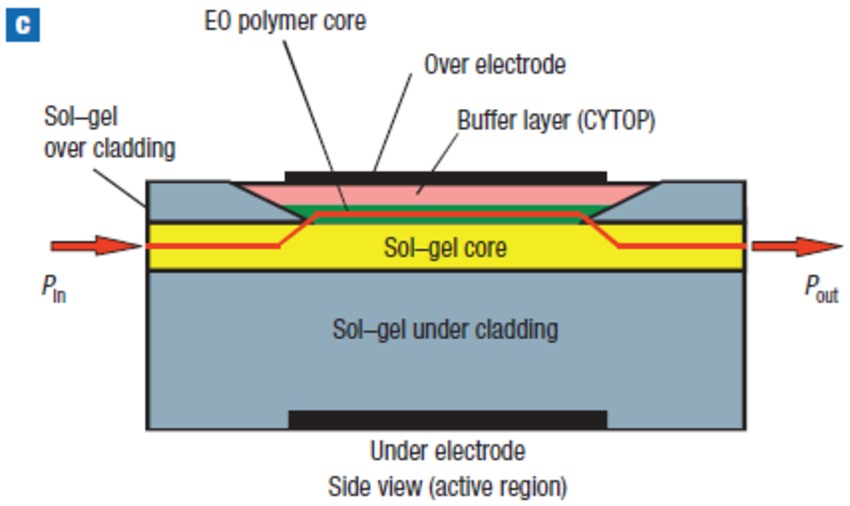 As observed, this complex structure consists of a few basic functional blocks:

Each building block is critical and should be designed and optimized properly to ensure the overall device performance.

As proposed earlier, the E-O modulator will be decomposed into a number of basic functional elements to be designed individually. The material properties will be the first step for every element.

Based on the references [2,3], sol-gel materials consist of a precursor and an index modifier. Therefore, the material model of the sol-gel can be treated as its precursor with a small index change, similar to the way that doped silica for optical fiber would be. The benefit of this approach is that same material dispersion property, which is essential for some applications such as traveling wave modulation, can be used for both the precursor and the modified materials.

Figure 2. Definition of material properties in the RSoft Material Editor.

As indicated in the Figure 1, the passive waveguide is a buried channel waveguide with sol-gel core buried in lower index sol-gel cladding. Based on reference [1], the core height is 3.5µm and the waveguide width was not mentioned; we will use 4µm in the design example. 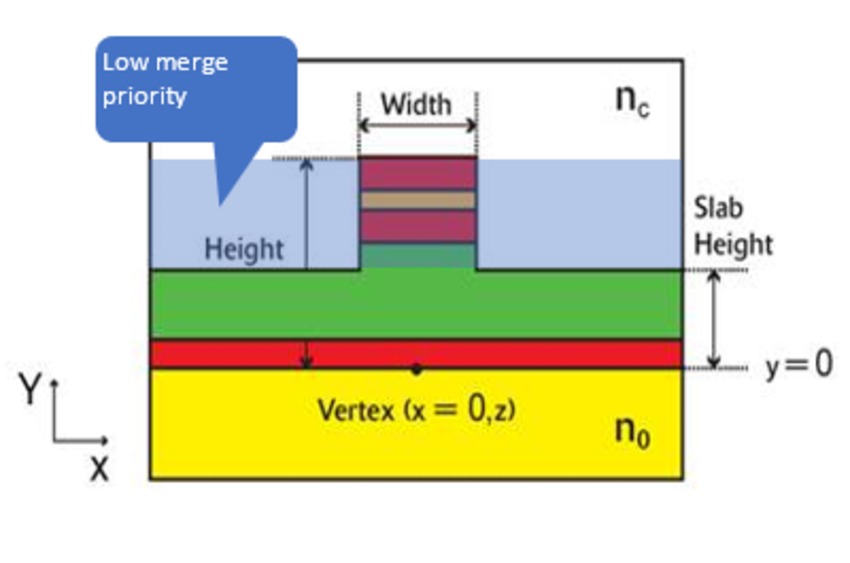 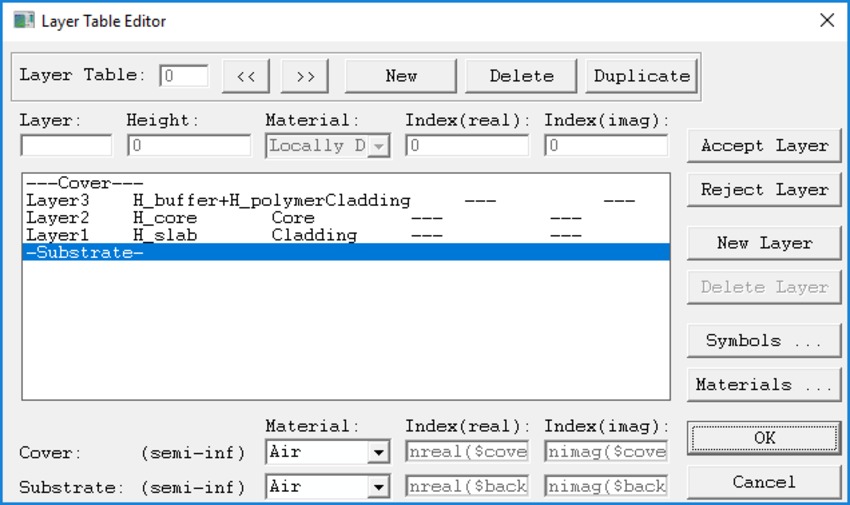 Figure 3. Constructing waveguide by multilayer and a “filling” channel.

For ease and consistency with the active waveguide, we define the passive waveguide with the built-in “multilayer” waveguide type as shown in Figure 3. Because the default multilayer waveguide assumes that the etched rib/ridge is uncoated, we need to add a channel waveguide, with lower merge priority to fill the etched gap.

The mode can be calculated by RSoft’s built-in BPM mode solver or FemSIM. Shown in Figure 4 are the TE and TM modes calculated by the BPM mode solver. It is observed that they are linearly polarized, hence semi-vector BPM calculation is sufficient and will be used in the future. 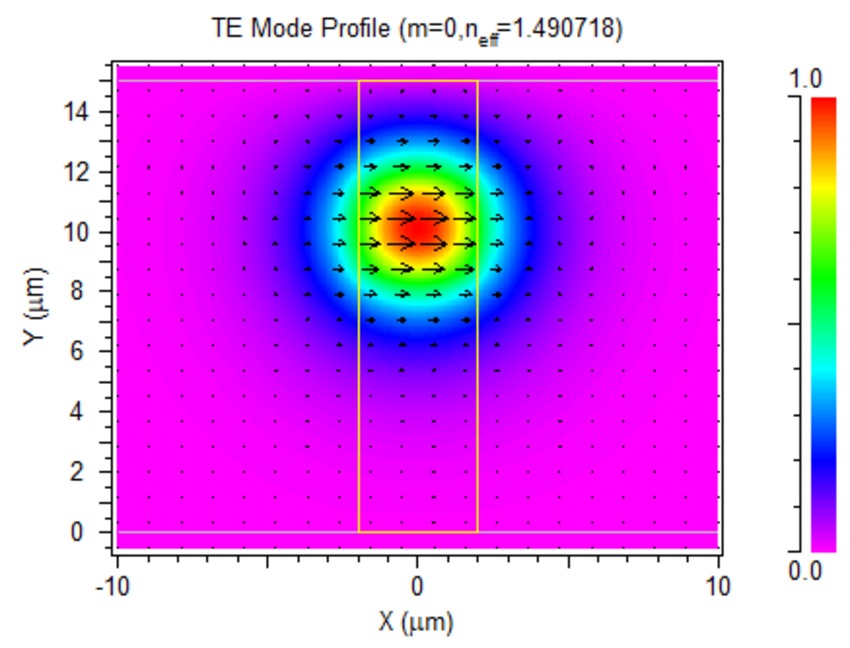 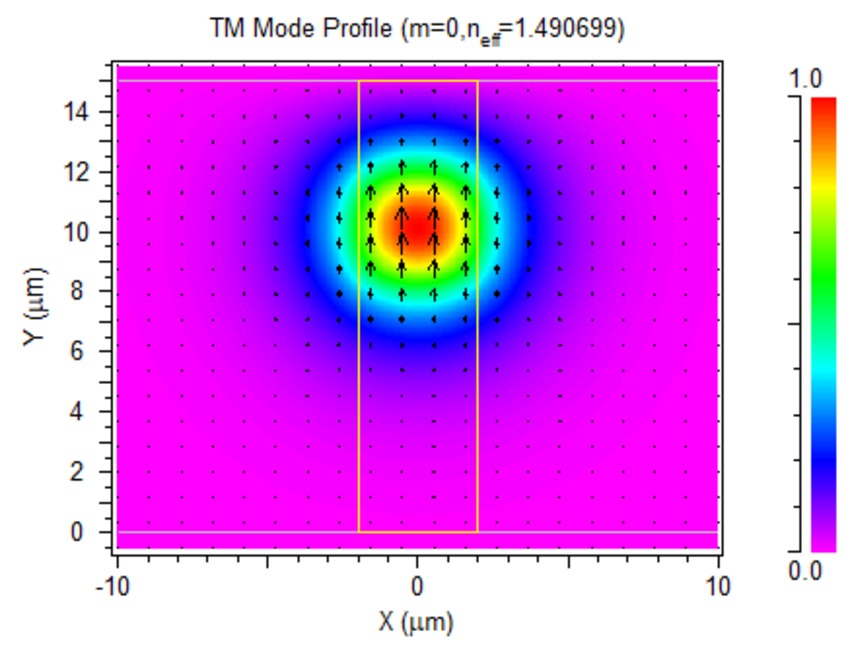 The function of the passive waveguide is to provide better coupling with optical fiber. Therefore, the coupling efficiency with a standard optical fiber is one of the design aspects, and it can be easily calculated in by overlapping the calculated mode with a fiber mode. Shown in Figure 5 is the MOST Scan results for coupling efficiency, with the standard Corning SMF-28 fiber as a function of the waveguide width. 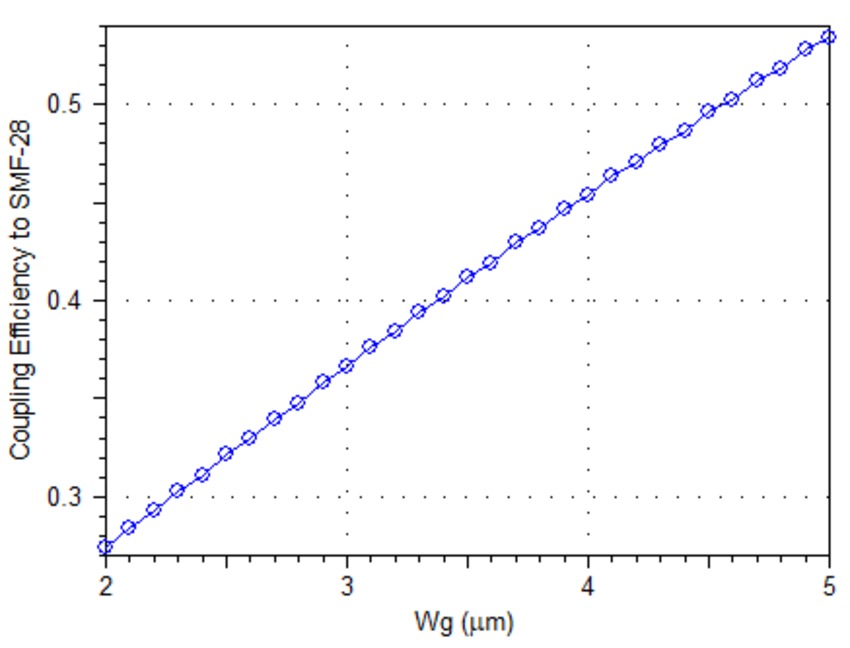 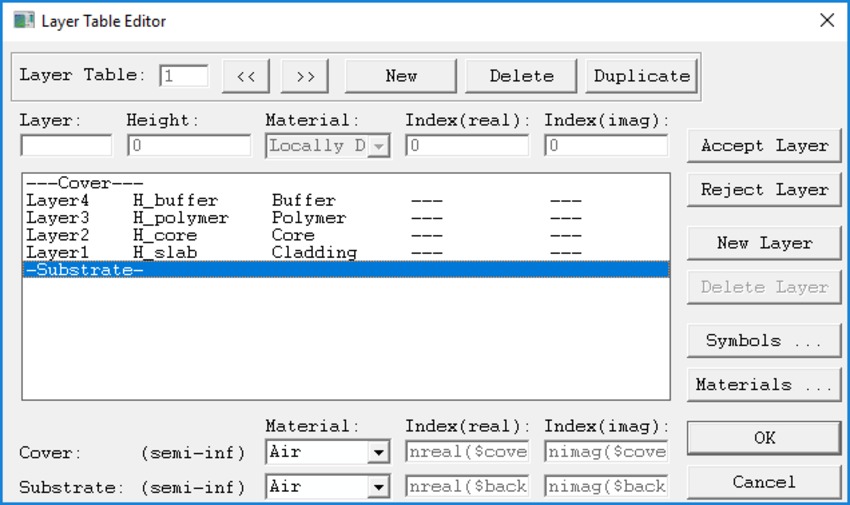 Because of the high index of the polymer layer, combined with the existing passive waveguide, the active waveguide is a multi-mode waveguide. FemSIM calculations indicate there are eight (8) guided modes at λ=1.55µm, as shown in Figure 7; six (6) confined in the active region and two (2) in the passive region. 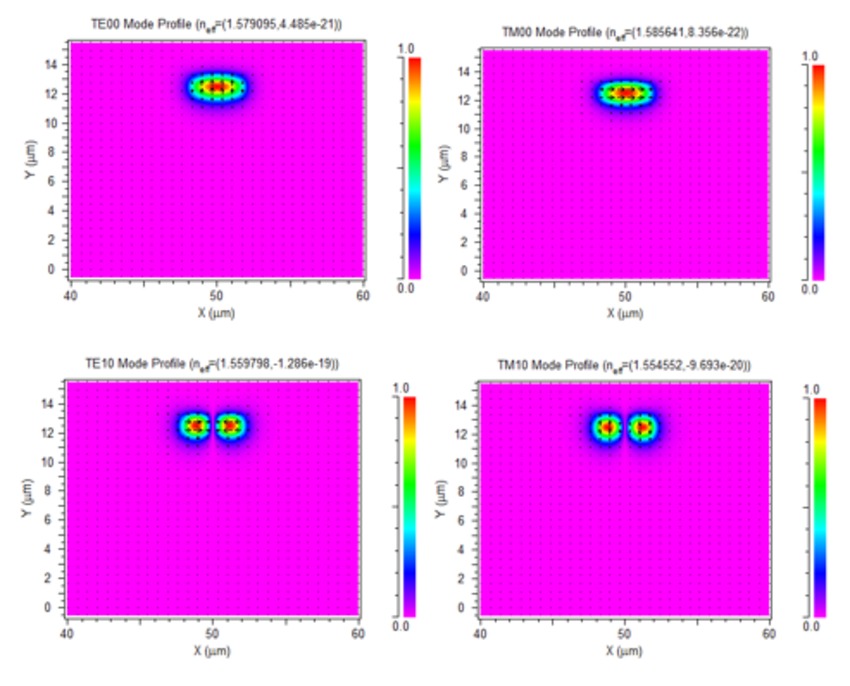 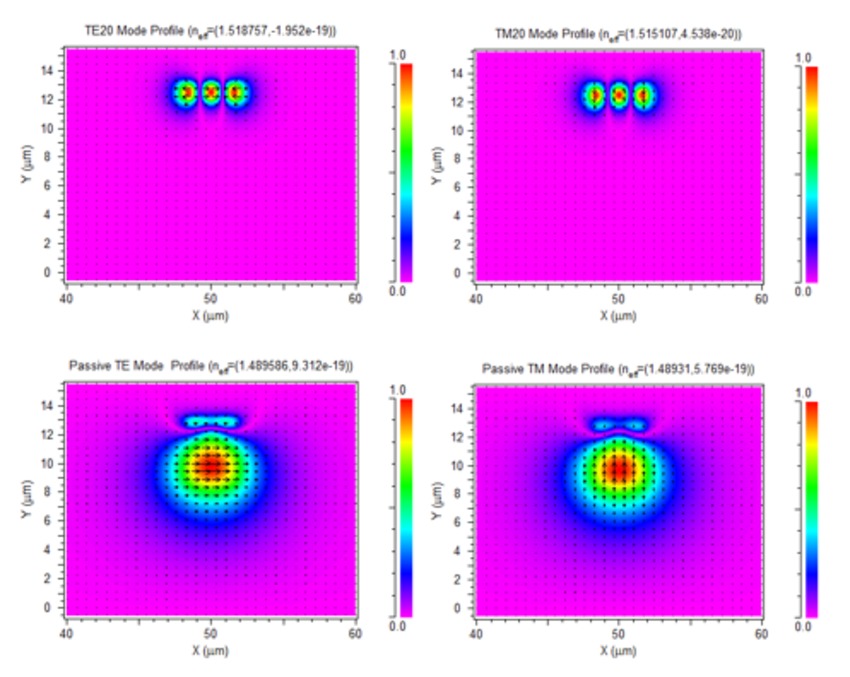 One of the important characteristics of the active waveguide is the confinement factor (CF), which measures how effectively the active material is modulated electronically. The CF can be easily obtained by creating a pathway in active region and monitoring the partial power. Because the active layer is lumped in the multilayer waveguide, we need to create an inactive channel to cover the active layer and use it as pathway.

As observed, the modal profile of the fundamental mode of the active waveguide is very different from that of the passive waveguide. Direct butt-to-butt coupling will be very lossy and a spot-size converter (SSC), as shown in Figure 1, is needed to reduce the insertion loss. Because of its slowly varying adiabatic coupling, BeamPROP is an excellent tool to model the light transition.

The input to the SSC is the computed mode from the passive waveguide designed earlier, as shown in Figure 9 (a). The output is the overlap with the pre-calculated fundamental mode of the active waveguide, either the TE00 or TM00 mode depending on the polarization. 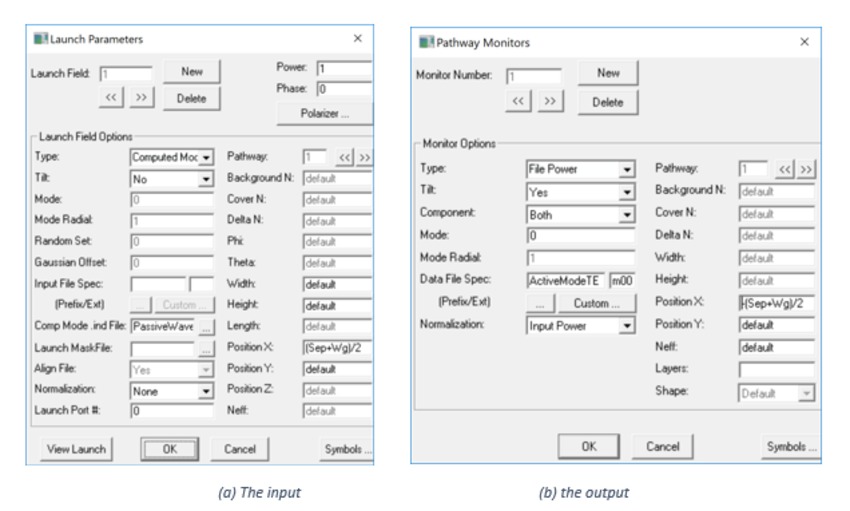 Figure 9. Input and output settings for the SSC.

For a 5mm long SSC, the simulation shows it has nearly 100% conversion efficiency, for both TE and TM modes, as shown in Figure 10.

Figure 10. BeamPROP simulation of the SSC.

For the SSC, there is always a trade-off between device length and coupling efficiency. To get a general idea of the impact, shown below in Figure 11 is the MOST scan curve over device length. As expected, shorter devices save space, but suffer from lower efficiency. 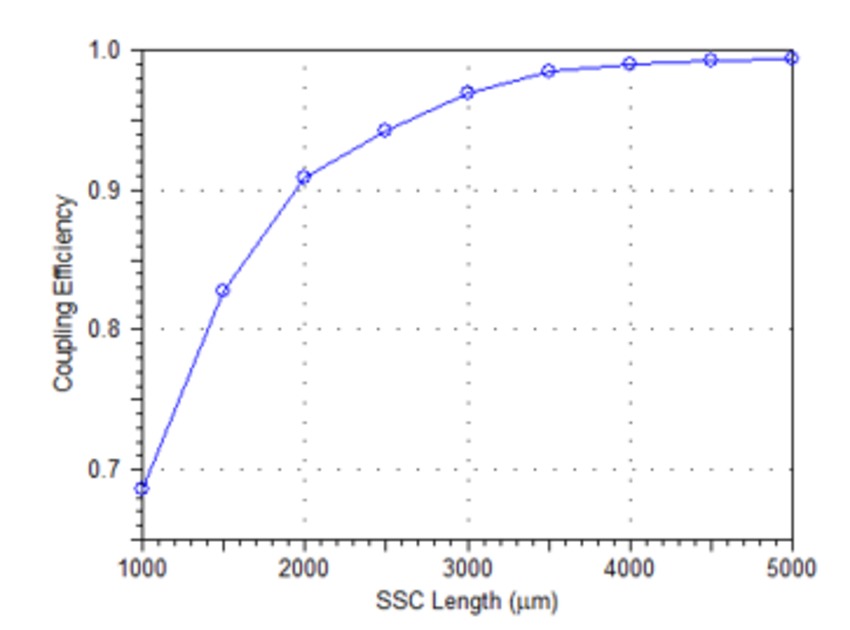 Figure 11. SSC conversion efficiency as a function of device length.

The Y-branch is the simplest 1x2 power splitter or combiner, which consists of two S-bends. The simulation is very straightforward with the computed mode as input and monitors for launch power in both branches. Because of symmetry, power in both branches are the same as shown in Figure 12(a).

There are only two design parameters; device length and separation. It is obvious that smaller separation and longer devices give lower insertion loss. However, in reality, the separation cannot be too small because of optical & electrical crosstalk. The separation should be fixed based on the crosstalk tolerance, then minimum device length to meet the insertion loss can be determined. To do so, we can use MOST to scan both design parameters, and obtain the design map as shown in Figure 12(b).

The Y-splitter can also be used reversely as a combiner. To test the on-off function, we launched two inputs from both branches with a phase difference. Shown in Figure 13(a) is the simulation result when the phase difference is 180o ; note that the Y-branch behaves exactly as it would at the off-state.

MOST scan results over the phase difference shows how the combiner evolves between on-state and off-state, as shown in Figure 13(b).

The phase shifter is the most critical and also the most complex element. It involves both optics and electronics. BeamPROP remains the optical solver and the Multi-Physics Electro-Optical Utility will be used for the electronic solver.

A push-pull configuration is used for the modulator as shown in Figure 14. Three electrodes are biased by -V, 0V, and +V, respectively. Shown on the left are the Multi-Physics Utility calculation results. 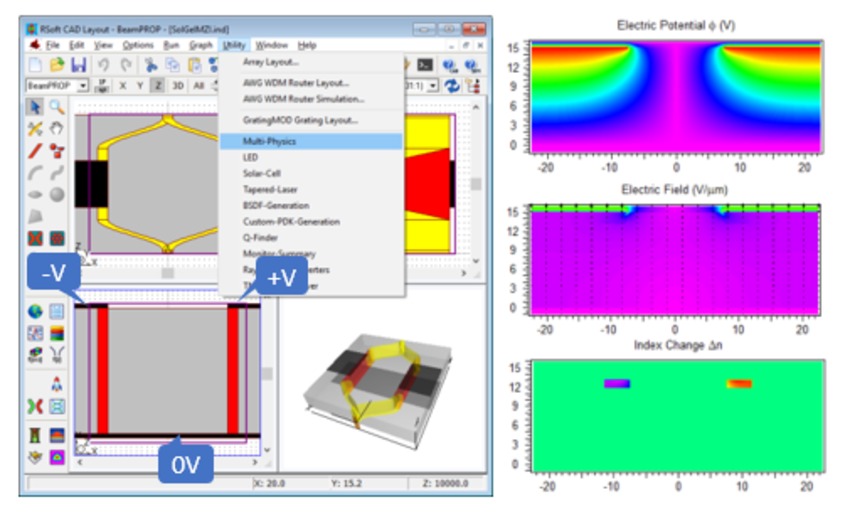 Please note that the computation domain for electronic solver has to be large enough to cover all electrodes. The optical solver, however, can be performed at much smaller scale around the optical waveguide.

The most important characteristics of a phase shifter is the half-wave length Lπ, which is defined as the device length to accumulate 180o phase shift under a given bias.

Where nv(V), and n0 are the effective indices of the mode with and without bias. Therefore, we can define a MOST metric as shown in Figure 15.

Figure 15. MOST Scan of the bias and calculated Lπ.

As predicted, the phase shifter is very polarization dependent because the difference between R13 and R33.

Performance of the MZI

With each part designed properly, an MZI can be built and its performance needs to be verified. The whole device can be simulated by BeamPROP, plus Multi-Physics Utility for E-O effect. Shown in Figure 16 are simulation results under 1V bias for both TE and TM waves.

As expected, under 1V bias, the TM wave is in an off-state and TE is not. Because of the long device, one simulation takes about 40 minutes on an 8-core computer. The memory usage is very small (0.05GB).

To test the dynamic performance, we can use MOST to scan over the bias, and the results of both TE and TM waves are shown in Figure 17. As observed, the modulator is very polarization dependent.

In case of 45o linearly polarized input as used in the reference [1], the input consists of TE and TM waves equally and the performance will be the sum of both, as shown in the same chart.  There are many factors to affect the shape of the combined curve, mostly the difference between R13 and R33. 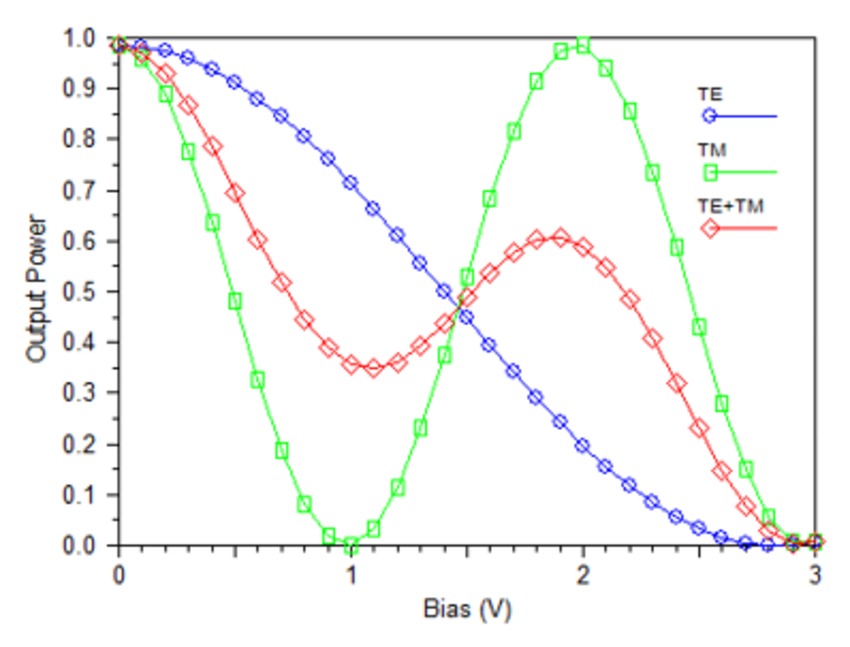 The exported mask file can be viewed by any mask viewer software. It can be imported into OptoDesigner for further editing, as shown in Figure 18(b).

It has been demonstrated that RSoft’s BeamPROP is an excellent simulation tool to design sol-gel based E-O modulators. The complex device can be decomposed into a few basic functional blocks and each block can be designed and optimized separately. The overall device performance can also be verified by BeamPROP, though this is a little bit time consuming.

Please be advised that this example is for demonstration purpose only, and is not aimed for direct comparison with the published results, simply because a lot of device parameters are not available in the references. Nevertheless, users can follow the same procedure and work on their own design by using their own design parameters.