What is Reinforcement Learning?

In the absence of a supervisor, the learner must independently discover the sequence of actions that maximize the reward. This discovery process is akin to a trial-and-error search. The quality of actions is measured by not just the immediate reward they return, but also the delayed reward they might fetch. As it can learn the actions that result in eventual success in an unseen environment without the help of a supervisor, reinforcement learning is a very powerful algorithm. 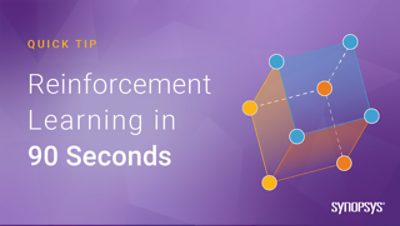 How Does Reinforcement Learning Work?

The Reinforcement Learning problem involves an agent exploring an unknown environment to achieve a goal. RL is based on the hypothesis that all goals can be described by the maximization of expected cumulative reward. The agent must learn to sense and perturb the state of the environment using its actions to derive maximal reward. The formal framework for RL borrows from the problem of optimal control of Markov Decision Processes (MDP).

The main elements of an RL system are:

A useful abstraction of the reward signal is the value function, which faithfully captures the ‘goodness’ of a state. While the reward signal represents the immediate benefit of being in a certain state, the value function captures the cumulative reward that is expected to be collected from that state on, going into the future. The objective of an RL algorithm is to discover the action policy that maximizes the average value that it can extract from every state of the system.

Model-based RL algorithms build a model of the environment by sampling the states, taking actions, and observing the rewards. For every state and a possible action, the model predicts the expected reward and the expected future state. While the former is a regression problem, the latter is a density estimation problem. Given a model of the environment, the RL agent can plan its actions without directly interacting with the environment. This is like a thought experiment that a human might run when trying to solve a problem. When the process of planning is interweaved with the process of policy estimation, the RL agent’s ability to learn.

Any real-world problem where an agent must interact with an uncertain environment to meet a specific goal is a potential application of RL. Here are a few RL success stories:

Reinforcement learning is applicable to a wide range of complex problems that cannot be tackled with other machine learning algorithms. RL is closer to artificial general intelligence (AGI), as it possesses the ability to seek a long-term goal while exploring various possibilities autonomously. Some of the benefits of RL include:

How to enable self-optimizing design platforms for better end-to-end results.

While RL algorithms have been successful in solving complex problems in diverse simulated environments, their adoption in the real world has been slow. Here are some of the challenges that have made their uptake difficult:

Supervised learning is a paradigm of machine learning that requires a knowledgeable supervisor to curate a labelled dataset and feed it to the learning algorithm. The supervisor is responsible for collecting this training data – a set of examples such as images, text snippets, or audio clips, each with a specification that assigns the example to a specific class. In the RL setting, this training dataset would look like a set of situations and actions, each with a ‘goodness’ label attached to it. The core function of a supervised learning algorithm is to extrapolate and generalize, to make predictions for examples that are not included in the training dataset.

RL is a separate paradigm of machine learning. RL does not require a supervisor or a pre-labelled dataset; instead, it acquires training data in the form of experience by interacting with the environment and observing its response. This crucial difference makes RL feasible in complex environments where it is impractical to separately curate labelled training data that is representative of all the situations that the agent would encounter. The only approach that is likely to work in these situations is where the generation of training data is autonomous and integrated into the learning algorithm itself, much like RL.

A challenge that is unique to RL algorithms is the trade-off between exploration and exploitation. This trade-off doesn’t arise in either supervised or unsupervised machine learning. An RL agent must strike a careful balance between exploiting its past experience and exploring the unknown states of the environment. The right balance would lead the agent to discover the optimal policy that yields maximal reward. If the agent continues to exploit the past experience only, it is likely to get stuck in a local minima and produce a sub-optimal policy. On the other hand, if the agent continues to explore without exploiting, it might never find a good policy.

What is Design Space Optimization?

DSO is a novel approach to searching large design spaces enabled by recent advancements in machine-learning.

What’s the Future of Reinforcement Learning?

In recent years, significant progress has been made in the area of deep reinforcement learning. Deep reinforcement learning uses deep neural networks to model the value function (value-based) or the agent’s policy (policy-based) or both (actor-critic). Prior to the widespread success of deep neural networks, complex features had to be engineered to train an RL algorithm. This meant reduced learning capacity, limiting the scope of RL to simple environments. With deep learning, models can be built using millions of trainable weights, freeing the user from tedious feature engineering. Relevant features are generated automatically during the training process, allowing the agent to learn optimal policies in complex environments.

Traditionally, RL is applied to one task at a time. Each task is learned by a separate RL agent, and these agents do not share knowledge. This makes learning complex behaviors, such as driving a car, inefficient and slow. Problems that share a common information source, have related underlying structure, and are interdependent can get a huge performance boost by allowing multiple agents to work together. Multiple agents can share the same representation of the system by training them simultaneously, allowing improvements in the performance of one agent to be leveraged by another. A3C (Asynchronous Advantage Actor-Critic) is an exciting development in this area, where related tasks are learned concurrently by multiple agents. This multi-task learning scenario is driving RL closer to AGI, where a meta-agent learns how to learn, making problem-solving more autonomous than ever before.

Discover what hardware is critical to enabling the real-time responses.

Learn more about AI Accelerators, including how they work and their benefits.

Related Term
What is Glitch Power?

Learn more about Glitch Power, including how it works and its benefits.