What is Static Timing Analysis (STA)?

Static timing analysis (STA) is a method of validating the timing performance of a design by checking all possible paths for timing violations. STA breaks a design down into timing paths, calculates the signal propagation delay along each path, and checks for violations of timing constraints inside the design and at the input/output interface.

Another way to perform timing analysis is to use dynamic simulation, which determines the full behavior of the circuit for a given set of input stimulus vectors. Compared to dynamic simulation, static timing analysis is much faster because it is not necessary to simulate the logical operation of the circuit. STA is also more thorough because it checks all timing paths, not just the logical conditions that are sensitized by a set of test vectors. However, STA can only check the timing, not the functionality, of a circuit design.

How does STA work?

When performing timing analysis, STA first breaks down the design into timing paths. Each timing path consists of the following elements:

The following figure shows the timing paths in a simple design example: 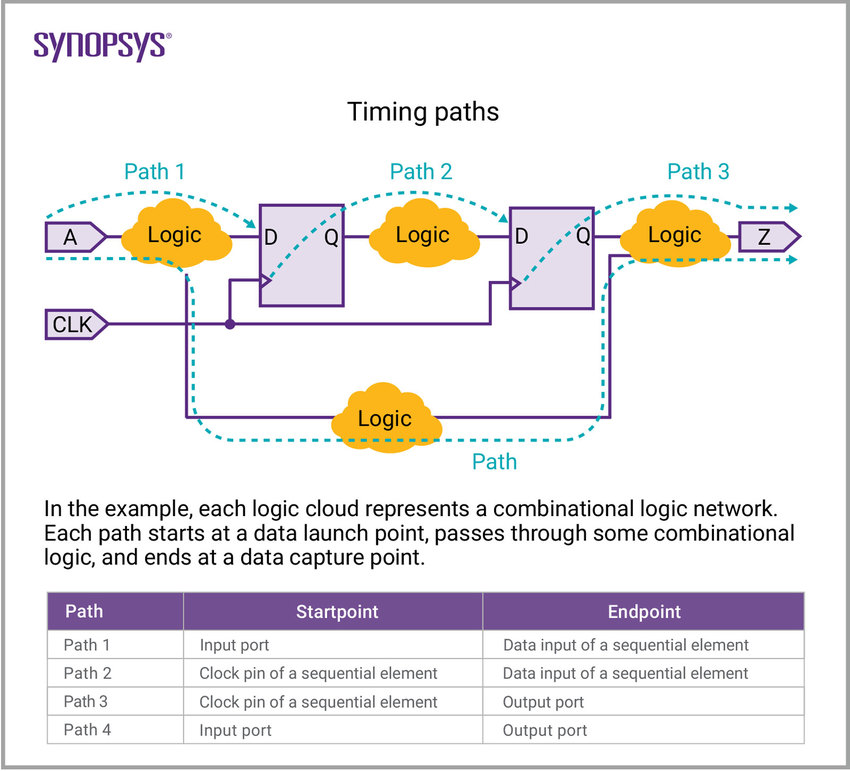 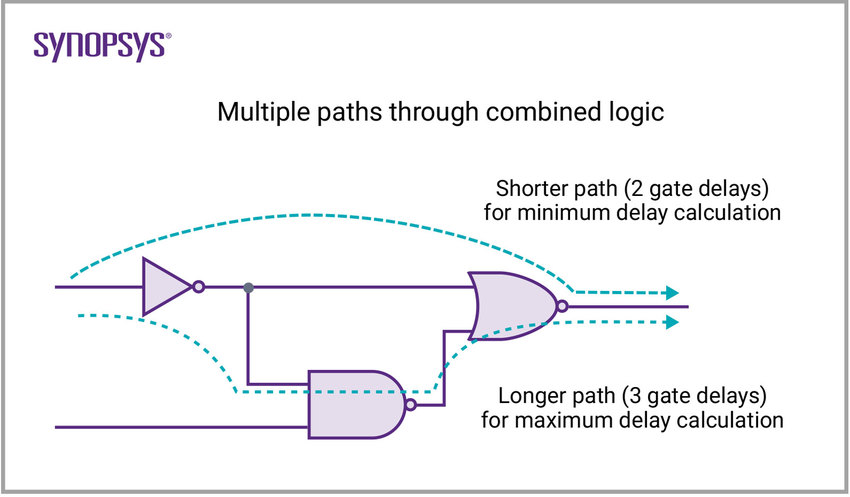 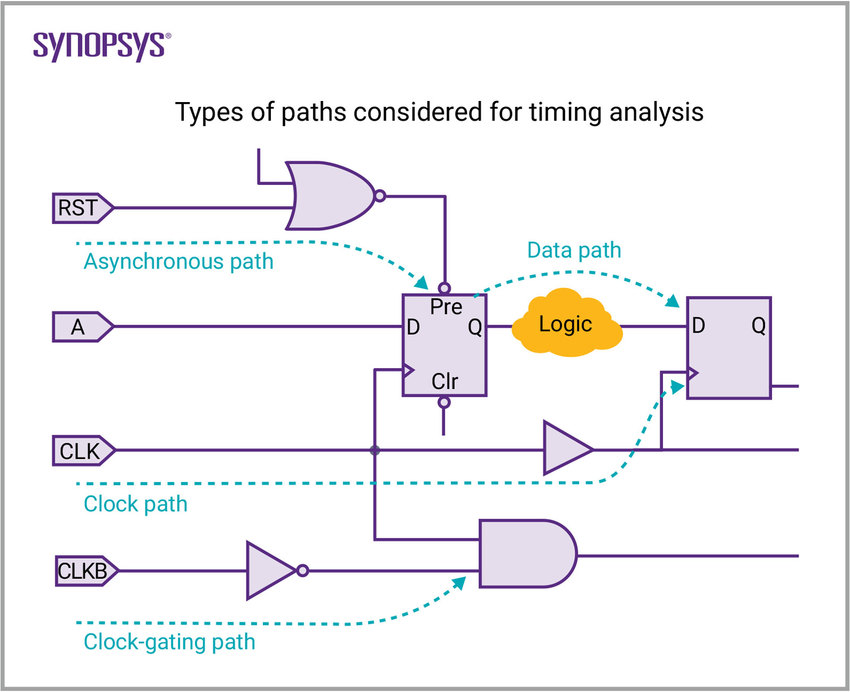 After breaking down a design into a set of timing paths, an STA tool calculates the delay along each path. The total delay of a path is the sum of all cell and net delays in the path.

Cell delay is the amount of delay from input to output of a logic gate in a path. In the absence of back-annotated delay information from an SDF file, the tool calculates the cell delay from delay tables provided in the logic library for the cell.

Typically, a delay table lists the amount of delay as a function of one or more variables, such as input transition time and output load capacitance. From these table entries, the tool calculates each cell delay.

Net delay is the amount of delay from the output of a cell to the input of the next cell in a timing path. This delay is caused by the parasitic capacitance of the interconnection between the two cells, combined with net resistance and the limited drive strength of the cell driving the net.

STA then checks for violations of timing constraints, such as setup and hold constraints:

The following example shows how STA checks setup and hold constraints for a flip-flop: 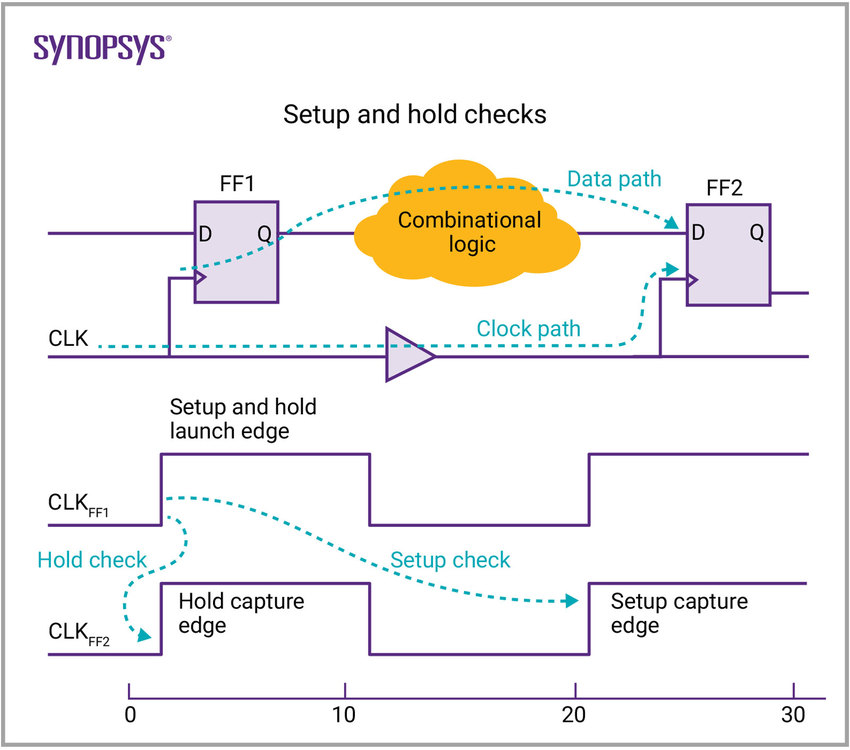 By default, the tool assumes that signals are propagated through each data path in one clock cycle. Therefore, when the tool performs a setup check, it verifies that the data launched from FF1 reaches FF2 within one clock cycle, and arrives at least 1.0 time unit before the data gets captured by the next clock edge at FF2. If the data path delay is too long, it is reported as a timing violation. For this setup check, the tool considers the longest possible delay along the data path and the shortest possible delay along the clock path between FF1 and FF2.

When the tool performs a hold check, it verifies that the data launched from FF1 reaches FF2 no sooner than the capture clock edge for the previous clock cycle. This check ensures that the data already existing at the input of FF2 remains stable long enough after the clock edge that captures data for the previous cycle. For this hold check, the tool considers the shortest possible delay along the data path and the longest possible delay along the clock path between FF1 and FF2. A hold violation can occur if the clock path has a long delay.

If certain paths are not intended to operate according to the default setup and hold behavior assumed by the STA tool, you need to specify those paths as timing exceptions. Otherwise, the tool might incorrectly report those paths as having timing violations.

An STA tool may let you specify the following types of exceptions:

Does Synopsys offer a STA solution?

This industry gold-standard solution improves your team’s productivity by delivering fast turnaround on development schedules for large and small designs while ensuring first-pass silicon success through greater predictability and the highest accuracy.