Ethernet continues to be the network interface of choice as the standard evolves to meet the massive data bandwidth requirements of different markets. The existing Ethernet protocol supporting many different data rates has been serving the existing consumer and datacenter network infrastructures for many years. Now, due to the upward trend in data traffic, new Ethernet rates have been developed to alleviate the traffic bottlenecks created by the data explosion as seen in Table 1. This article focuses on the new 2.5G/5G Ethernet speeds and describes the advantages of moving existing wired BASE-T Ethernet infrastructures to enable faster wireless environments. 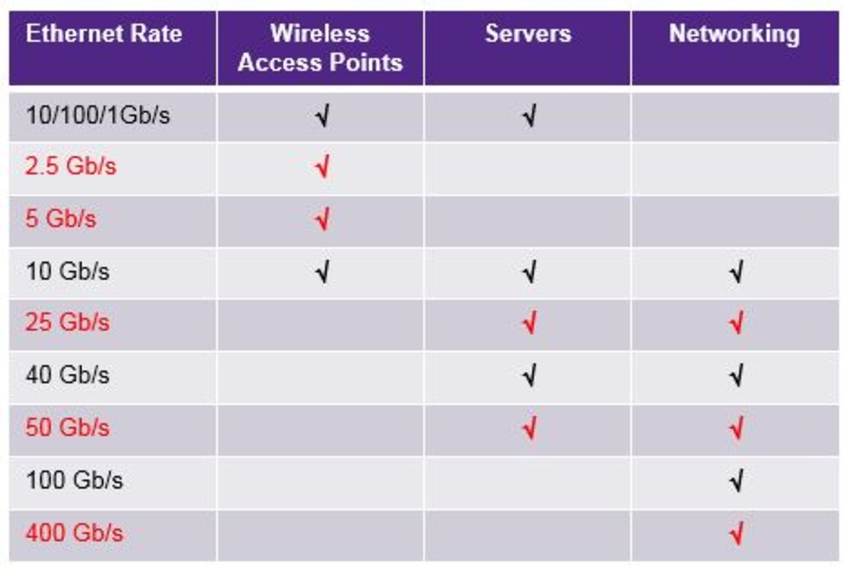 In today’s Ethernet network, datacenters have moved to extremely fast speeds to support the world’s growing data consumption needs. However, little has happened to increase the speeds of the existing infrastructure or address the bottleneck that the next generation of Wi-Fi (IEEE 802.11ac) products are creating. The next generation of Wi-Fi is moving to speeds of up to 6.8 Gbps, far exceeding the 1G speeds supported by today’s BASE-T Ethernet infrastructure. Clearly, there is a need to move BASE-T infrastructures to faster speeds to remove bottlenecks and the new 2.5G/5G Ethernet protocols are ready to support these higher data rates.

There is overwhelming demand for BASE-T Ethernet due to its ease of use and IT support, use of common cables that are similar to previous standards, and the ability to support incremental Ethernet speed updates. According to an Ethernet Alliance presentation, "Ethernet 104: Introduction to 2.5G/5G BASE-T Ethernet," over 4 billion 100BASE-T and 1000BASE-T (also known as IEEE 802.3ab) Ethernet switch ports have shipped in the last 20 years along with a similar number of BASE-T end points (such as desktop computers and servers, IP phones, wireless access points and consumer electronics). The presentation indicates that the total shipment of BASE-T port is approaching one billion a year. 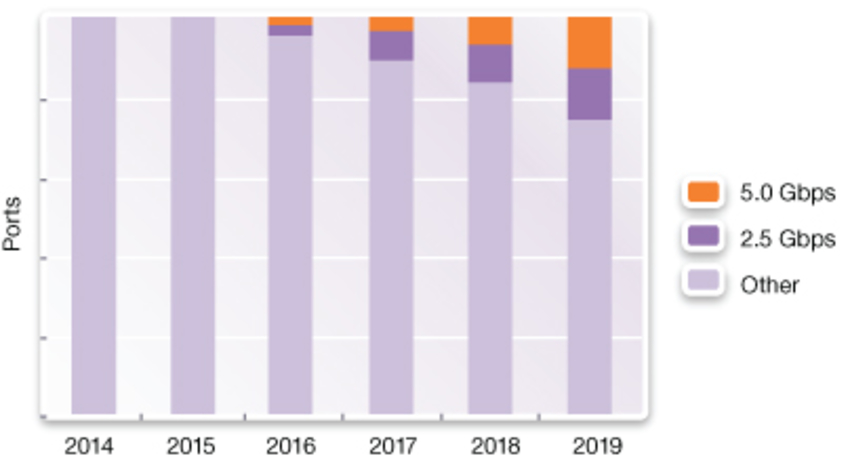 Advantages of the 2.5G/5G Standard and Formation of New Alliances

Increasing the BASE-T infrastructure’s bandwidth is essential as consumers stream more data, and a faster BASE-T Ethernet infrastructure will help improve wireless speeds in home networks. Connection to the outside world is serviced by the Internet provider competing with other local providers. They all offer services at various speeds as a price option. But once the data in introduced to the existing BASE-T environment, it is throttled to 1G. So even with a wireless system that can run faster, the variation in the speed is not seen. Another example is a media server disk connected via an Ethernet port. Even though the wireless network can run much faster, the link to the media using a BASE-T environment becomes the bottleneck.

Alliances outside of the IEEE are developing 2.5G/5G standards to meet customer demand for faster BASE-T Ethernet speeds. New alliances including the NBASE-T and MGBASE-T are developing standards expected to be named 2.5GBASE-T and 5GBASE-T. There is also a new IEEE study group formed to look into these new standards. The alliances’ models driving specifications that become the start of IEEE standards have proven to be fruitful. The risk of creating competing standards and market confusion exist, but over time consolidation nullifies the risk.

Synopsys is addressing these new Ethernet speeds in a similar method as the evolution of the BASE-T speeds with an incremental update to the silicon-proven DesignWare® Ethernet XGMAC and PCS IP cores for speeds of 1G/2.5G/5G/10G. In addition to the new speeds, advanced features such as Time Sensitive Networking (TSN) are required. For the PCS layer the new USXGMII interface has been added along with additional registers for support of the IEEE 1588 standard easing the development of TSN-based software. The DesignWare Ethernet MAC IP for 1G/2.5G/5G/10G speeds easily supports the required clocking speeds and has been updated with IEEE 1588 and audio-video-bridge support for the many TSN updates coming to 802.1 networking.