To meet the low-power, performance and functionality demands of advanced electronics products, virtually every SoC designed today is a multicore SoC. In this environment, on-chip cache memory plays a critical role, as memory architecture is fundamental in determining system performance.

Historically, CPU speed has outpaced memory speed. This performance gap led to the use of on-chip cache memory in single-processor systems to prevent the CPU from having to wait for instructions and data from memory. However, in a multicore SoC, individual cores must access and share data across the entire chip.

The AMBA 5 CHI enables users to ensure cache-coherent interconnects, yet there are always challenges in verifying a SoC through its various stages of design from interconnect, to RTL integration, to full SoC verification. Verification IP is a key element in meeting those challenges; however, the current generation of verification IP (VIP) is running out of steam to provide the performance, productivity and features to verify the design as RTL is incrementally integrated into the system.

The AMBA 5 CHI protocol is geared to offer users high performance on cache management. Achieving this requires a different architecture and communication methodology from previous generation protocols like ACE or AXI4. As a result, the protocol also requires a new VIP architecture and infrastructure that can both support the complexity of the protocol and offer the necessary verification performance for today's advanced requirements. 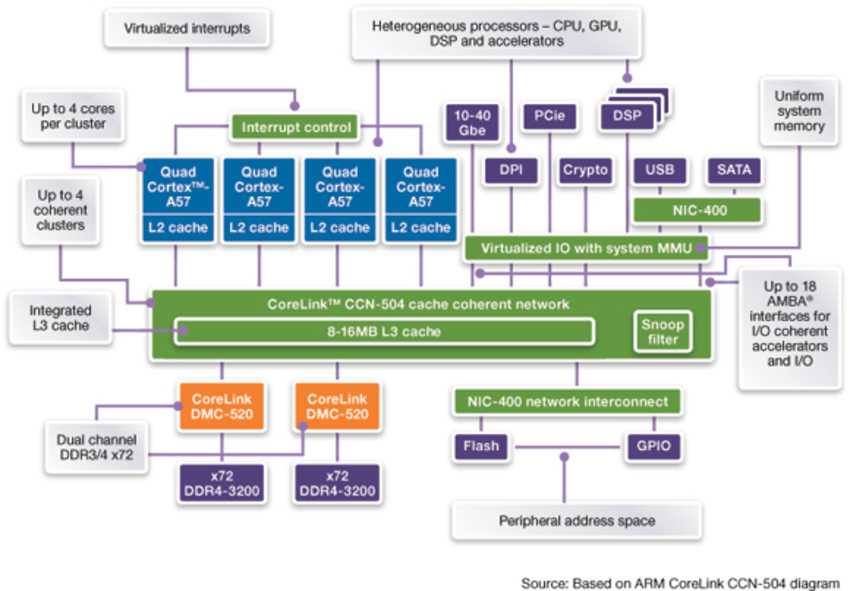 In addition, it's important to note that the CHI protocol is not used in isolation. The ARM CoreLink™ Cache Coherent Network (figure 1) contains multiple interfaces. In this example, the CHI interface is used from the interconnect to the Cortex-A57s and DMC-520 memory controllers. The rest of the interfaces are a mixture of ACE-Lite, AXI4, AHB™ and APB™. It is therefore very important to have consistent verification IP working in a highly configurable environment to be able to adapt to the evolving testbenches needed to verify the interconnects, subsystems, and SoC.

The need for cache coherency is inherent in today's chips. Because CPU speed has historically outpaced memory speed, on-chip cache memory is commonly used to prevent processors from having to wait for instructions and data from memory.

Yet in the multicore SoC, cores must access and share data across the entire chip. Cache memories fetch and store data in local caches to facilitate data sharing. Cache coherency is about getting the right data to the right place at the right time. 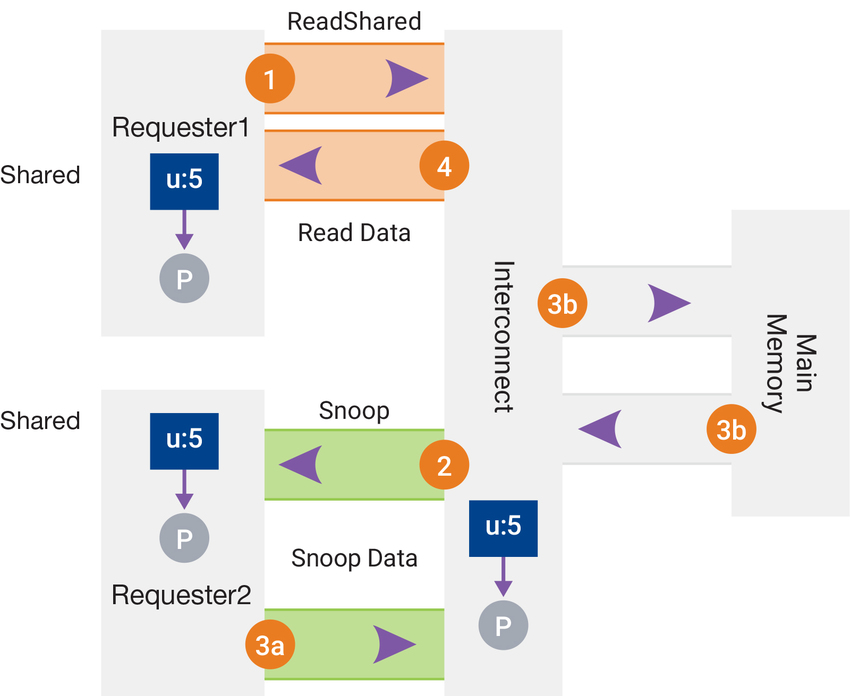 Verifying such a system can be quite complex. There can be multiple scenarios and corner cases involved. But there are five key areas that must be verified:

Verification IP is an essential part of building a verification environment for an AMBA-based interconnects which will typically be made up of many varieties of AMBA-based interfaces. It enables traffic generation across the full spectrum of the protocols, data integrity checking, functional coverage reporting and debug capabilities to rapidly verify interconnects and IP blocks. In addition, commercial VIP is developed by dedicated AMBA experts and proven across multiple designs to help ensure compliance to the ARM specifications.

Building a verification environment around the ARM CoreLink CCN-504 Network in figure 1 first requires the placement of VIP at each port to represent the traffic generation and response across the interconnect. It then includes a System Monitor that will interact with all other VIP to ensure cache coherency across the system, as in the example above. As RTL is brought into the design replacing the VIP components, the VIP for that component is switched to passive mode. It now monitors the port for correct protocol behavior and checks for data integrity across the system utilizing the system monitor. Using Synopsys Protocol Analyzer, the system can now automatically track performance metrics such as latency and bus utilization, and use an intuitive, graphical user interface to analyze performance data.

With multiple types of VIP running at the same time, designers need to build this environment with performance in mind and to include a high-performance system monitor. 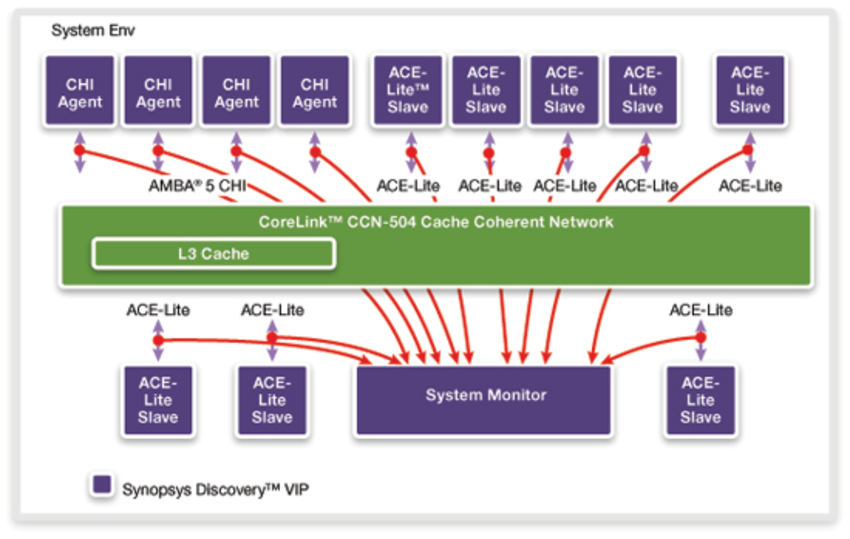 The first challenge many users face is in building their verification environment to get to first test. Synopsys offers a configurable GUI, built-in test plans and a comprehensive set of configurable sequences to rapidly configure a verification environment to get to first test. In addition, a test suite for AMBA 5 CHI interconnects is available as part of the VIP, delivered in source-code SystemVerilog UVM, to provide users with a comprehensive basis for exhaustive verification coverage.

The second challenge is often in time-to-verify. Most commercial VIP is written in C, e, or OpenVera® and then bloated with wrapper code needed to run in the verification environment. However, the VC VIP for AMBA 5 CHI is written in native SystemVerilog that can run up to 3X faster than wrapper-based VIP.

A third challenge can be time-to-debug, particularly if a user is not completely familiar with the intricacies of the CHI protocol. Synopsys VIP offers protocol-aware debug, source code visibility and error diagnostics that ease this process.

VC VIP for the AMBA 5 CHI protocol contains all the functionality included in the CHI protocol, including master agents, a CHI system monitor that performs cache coherency checks at the system level, the CHI interconnect VIP environment, and the CHI system env which encapsulates the environment.

This VIP is provided as a top level AMBA system env component that instantiates a configurable number of CHI/AXI/AHB/APB subsystem environments, which in turn can be configured further for a number of master/slave agents and their type. A user would instantiate this component in the testbench, which then automatically provides the system configuration object to the top level system env, and then instantiates it at the subsystem level. This offers users a fast and easy mechanism to build a comprehensive verification environment with UVM that runs natively on any simulator.

Cache coherent interconnect is a must have for multicore SoCs, and will only become more important with future generations.