The FPGA-Based Prototyping Methodology Manual: Best practices in Design-for-Prototyping (FPMM) is a comprehensive and practical guide to using FPGAs as a platform for SoC development and verification. The manual is organized into chapters which are roughly in the same order as the tasks and decisions which are performed during an FPGA-based prototyping project. The manual can be read start-to-finish or, since the chapters are designed to stand alone, you can start reading at any point that is of current interest to you.

The main lesson of the FPGA-based prototyping methodology manual might be to tackle complexity one step at a time but make sure that each step is in the right direction and not into a dead end. When starting an FPGA-based prototyping project, our success will come from a combination of preparation and effort; the more we have of the former, the less we should need of the latter." ---- Doug Amos, Austin Lesea, René Richter 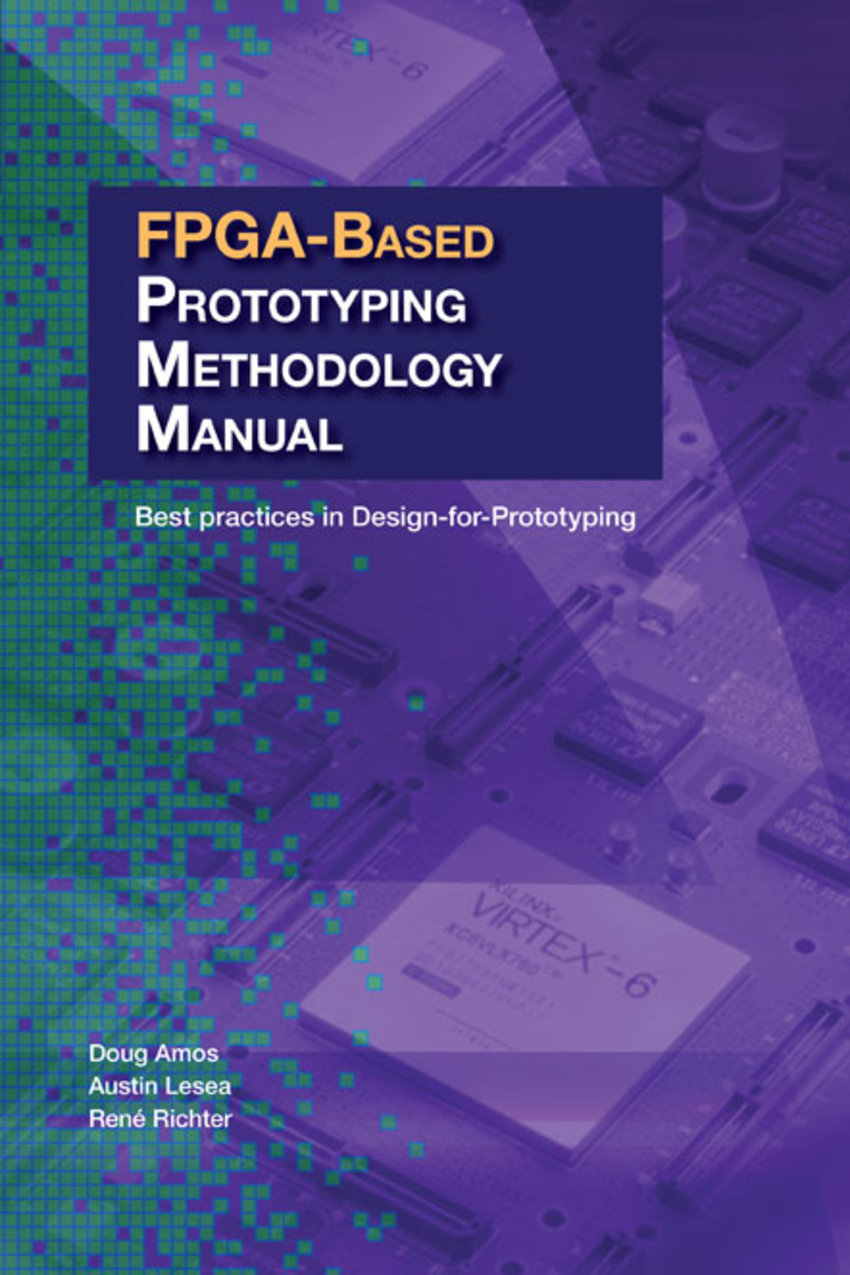 You can download a FREE, full eBook edition (English in .pdf, .prc and .epub and Japanese in .pdf) using your SolvNet Id or Corporate e-mail Address.

You can purchase copies of the book through Amazon.com or Synopsys Press, or you can order it through any bookstore (ISBN: 978-1617300042).

The authors of the FPGA-Based Prototyping Methodology Manual (FPMM) are all experts in prototyping SoC designs using FPGAs and believe that FPGA-based prototyping is of such crucial benefit to today’s SoC and embedded software projects that they are compelled to do all they can to ensure your success. In the manual they share what they refer to as "The three laws of prototyping" which govern most, if not all, prototyping projects

This methodology manual provides information on how these three laws of prototyping can be broken or overcome by using automation and a design-for-prototyping methodology; if the procedural and design guidelines of design-for-prototyping can be integrated within the whole SoC project, then software quality and project schedules will be improved. This manual is a must-read for anyone designing, or getting ready to design, an SoC.

Check out our blog Breaking the Three Laws . This blog is dedicated to discussing technically challenging ASIC prototyping problems and sharing solutions.

Doug Amos, Synopsys, Inc.
Doug gained an honors degree in Electrical and Electronic Engineering from the University of Bath, England in 1980. He did his first programmable logic design in the mid-80’s, when FPGAs were still called Logic Cell Arrays. Since then, Doug has designed or supported countless FPGA and ASIC designs either as an independent consultant or working with the leading vendors. Doug became Synplicity’s first engineer and Technical Director in Europe (Synplicity was acquired by Synopsys in 2008) and has presented widely on FPGA design and FPGA-based prototyping since that time.

Austin LeseaAustin Lesea, Xilinx, Inc.
Austin graduated from UC Berkeley in 1974 and 1975 with his BS EECS in Electromagnetic (E&M) Theory and MS EECS in Communications and Information Theory. He has worked in the telecommunications field for 20 years designing optical, microwave, and copper- based transmission systems. He developed SONET/SDH GPS-based Timing Systems for 12 of those years. For the last ten years at Xilinx, Austin was in the IC Design department for the Virtex product line. His new role is working for Xilinx Research Labs, where he is looking beyond the present technology issues.

Rene RichterRené Richter, Synopsys, Inc.
René holds an MSEE degree, the Dipl.-Ing. der Elektrotechnik, from the Chemnitz University of Technology in Germany in 1999. He has worked 11 years in the area of FPGA-based Prototyping, first at ISYTEC, then Pro Design and now at Synopsys; each transition as a result of an acquisition. René managed the development of the CHIPit hardware platforms before moving on to become Director of Applications. During this time he developed co-simulation interfaces and prototyping hardware and has implemented many ASIC designs in FPGA. René has also developed prototyping concepts and solutions for customers and he is one of the inventors of the UMRBus and CHIPit product line.

The authors are grateful to the FPMM review council who shared their time and opinion in order to improve the FPMM.

Free FPMM eBook available in both English and Japanese