Internet of Things (IoT) edge devices, from smart watches, to fitness trackers, to parking meters, are now being designed in record numbers. Designers of these products all have one thing on their mind – a relentless focus on energy efficiency. To meet consumer demand for longer times between recharging, batteries are growing in both size and energy per cubic centimeter for phones and tablets. However, IoT applications have much tighter cost and space constraints so designers of IoT systems-on-chips (SoCs) cannot rely on more expensive or larger batteries alone to increase device use time. This article describes how designers can use foundation IP (logic libraries and embedded memories) on low-power process technologies to reduce the power consumption of IoT designs.

Many IoT devices spend up to 99.9 percent of their time off. These typically need to wake up quickly, run for a short amount of time, and then shut down or go back into a standby sleep mode. Figure 1 shows the energy consumption impact in using standard IP versus IoT-optimized IP through an IoT device’s start-sense-activity-sleep cycle. IoT-optimized IP completes its algorithms more quickly in active mode and uses less energy per unit of time in both active and standby modes. 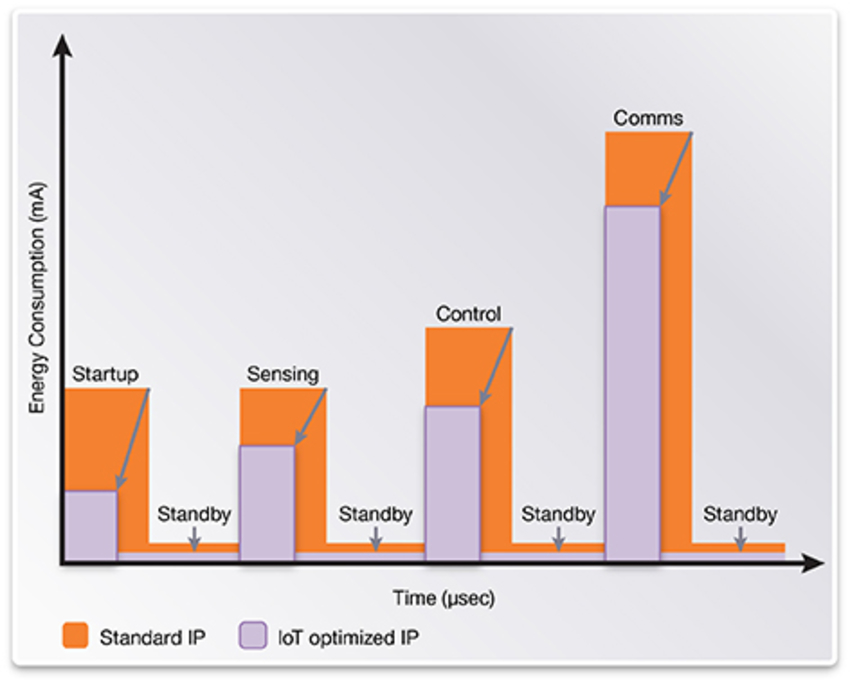 In addition to choosing efficient IP, designers can use the native capabilities of the process technology and take advantage of the different threshold voltage (VT) process options. A given process technology will have its standard VT, a low VT (with more leakage and higher performance), and some number of higher VTs (with lower performance but also less leakage). Figure 2 shows how the performance and energy curves change as VT and operating voltage (VDD) increase. To minimize the required energy for a logical operation, designers can use the lowest possible VDD while ensuring that they meet their performance/computing speed requirements. Lowering the voltage can result in tremendous energy savings with only moderate performance tradeoffs. 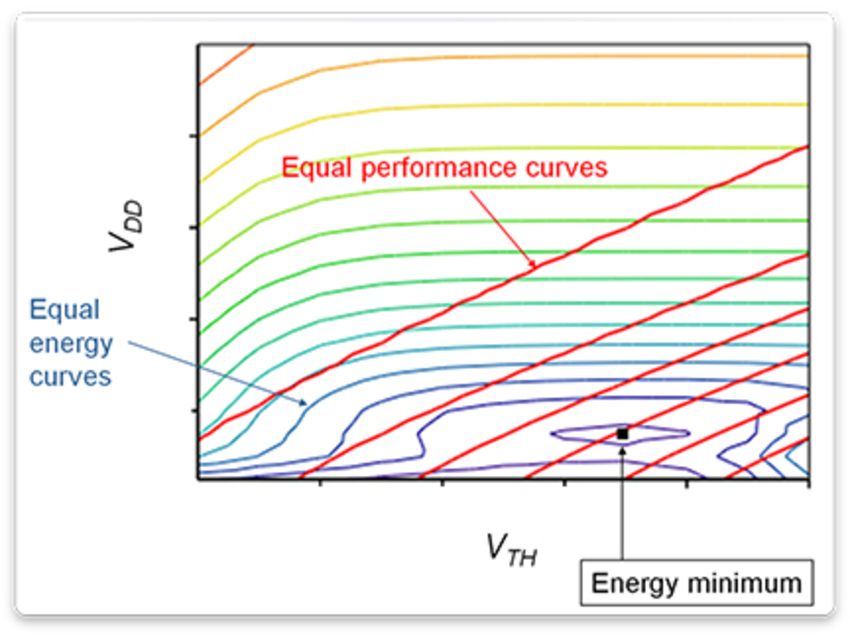 Designs requiring low leakage and low voltage will benefit from the low-power DesignWare Logic Libraries for TSMC 40ULP. These libraries are designed to support both the standard and the eFlash process options. They're designed for low-voltage operation, so that they can run down to 60 percent of the nominal VDD to find the point of minimal energy use at various performance and activity levels. 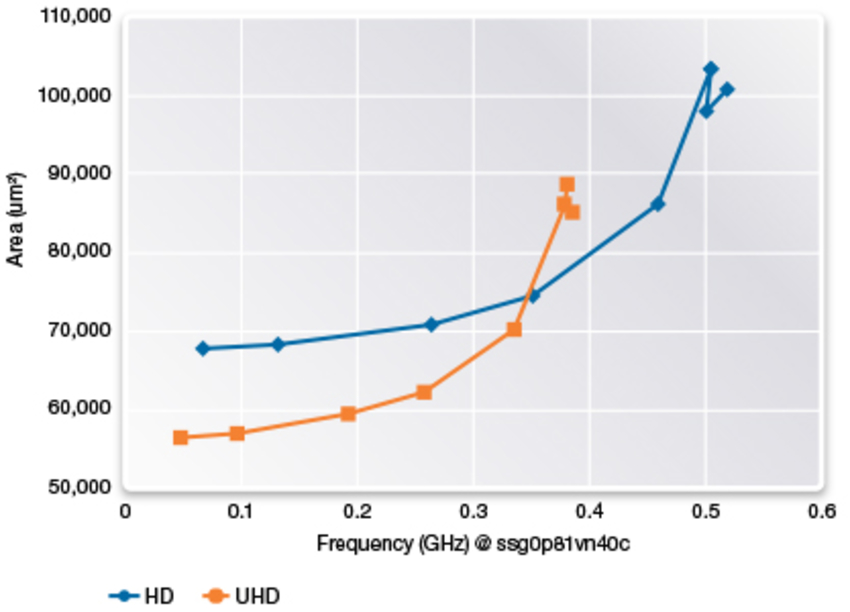 Results will be dependent upon the depth of the data path of the CPU being synthesized as well as its operating voltage. In any case, the 7-track library is much more efficient at very low frequencies but as the frequency increases, the 9-track library can be the better choice.

Each logic library architecture comes with Power Optimization Kits, collections of cells that designers can use to manage power in IoT applications. The kits include cells such as header switches, isolation cells, always-on cells, live latches, and level shifters.

Foundry-sponsored logic library and memory compiler IP for TSMC 40ULP is available in two clusters of process/voltage/temperatures (PVTs) as shown in Table 1. The 1.1V cluster can run down to 0.9V in 40ULP, giving designers the option to manage multiple voltage domains. The level shifters in the Power Optimization Kit enable blocks in the design to signal between the 0.9- and 1.1-volt domains. TSMC accepts sign-off at the FFG and SSG global corners, giving designers the ability to increase performance over conventional total corners. 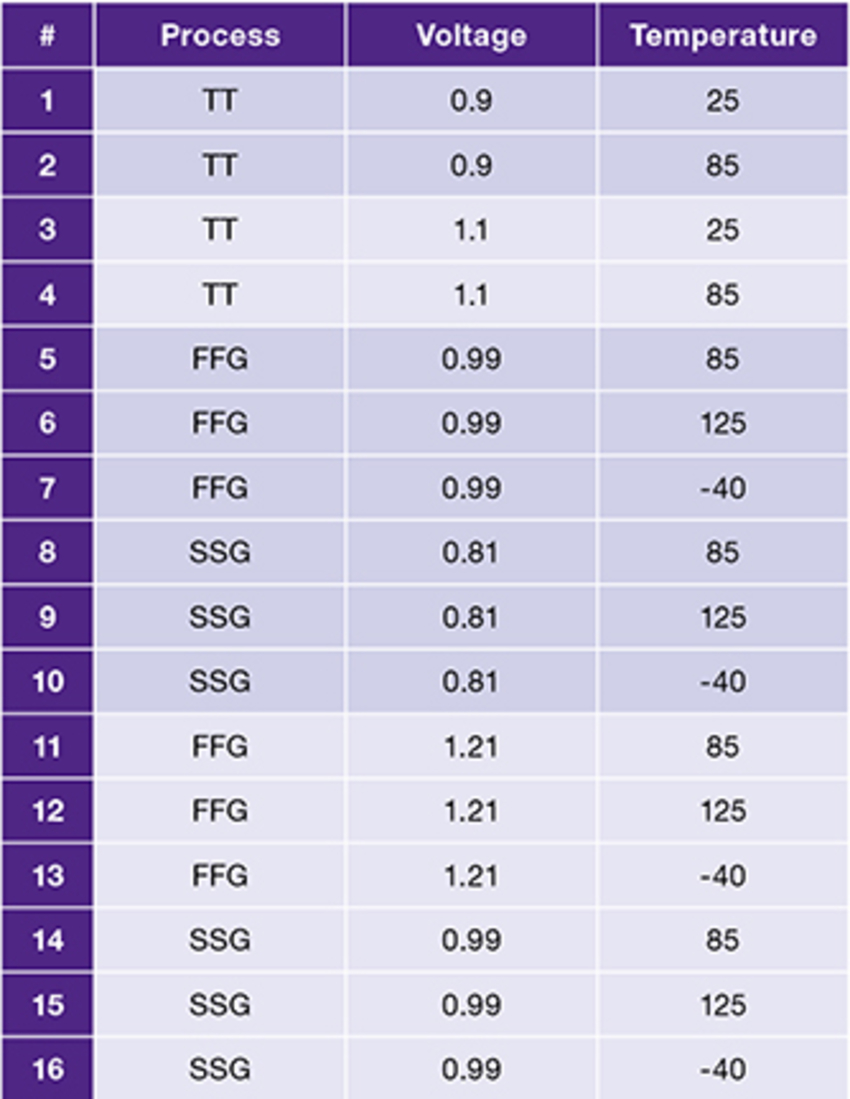 Designers can stretch their IoT design’s power budget through the use of specialty flip-flops and working at lower voltages. The combination of the multi-bit flip-flops and high-performance flops can be applied to cut power in IoT devices. 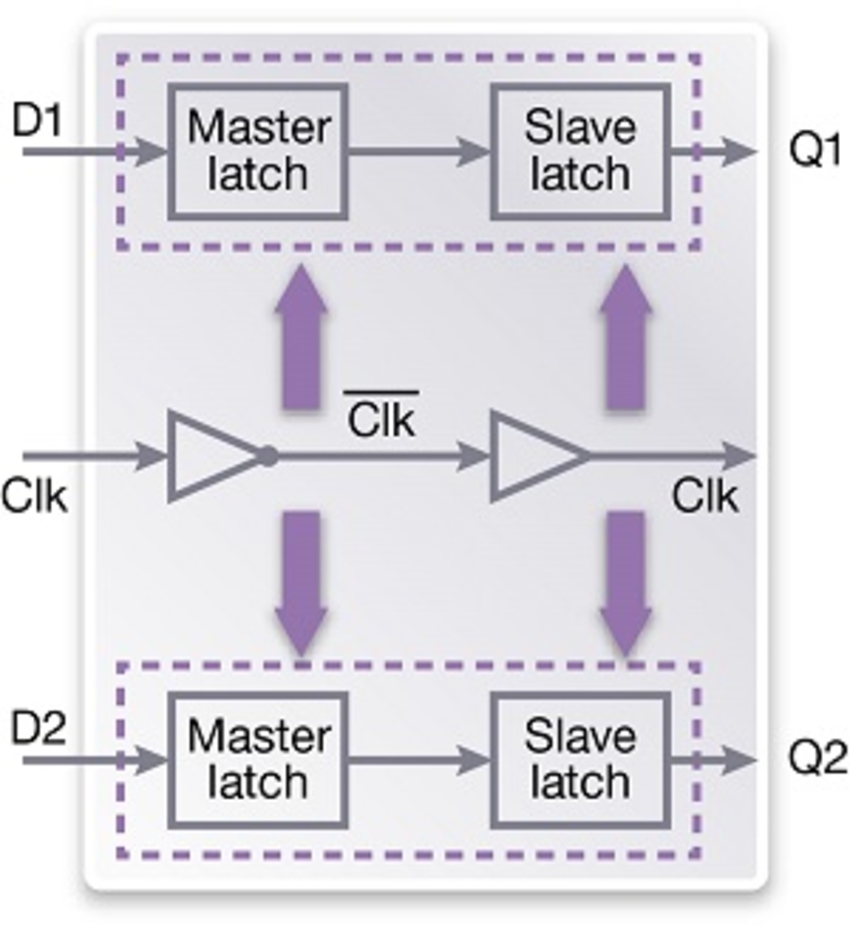 The DesignWare Ultra-Low Leakage Library for always-on wakeup circuits offers the lowest possible leakage without the use of the voltage regulators. It supports voltages from 0.9V to 3.6V, offering designers flexibility in battery options from AA cells to lithium cells by using the thick IO oxide. 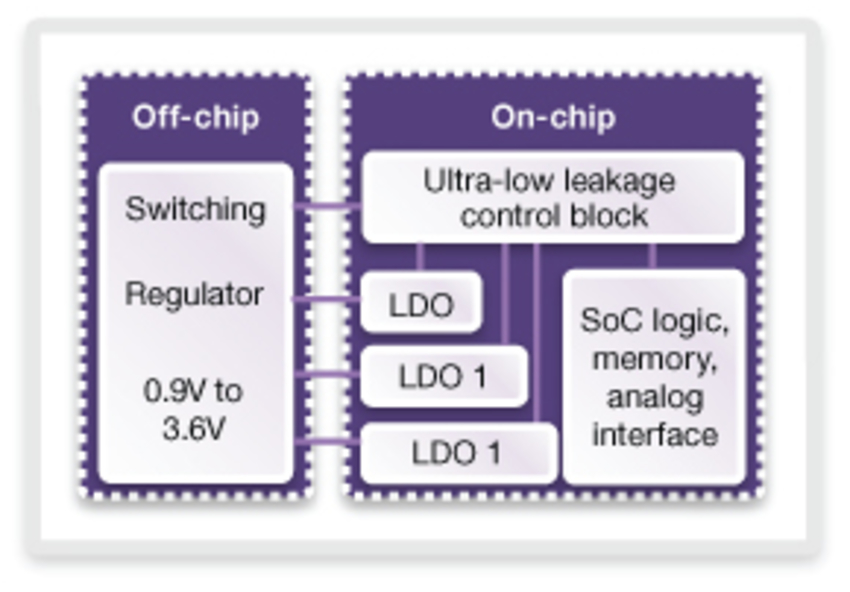 Every IoT device needs memory, and one commonly used memory is high-density single-port SRAM. Typically the code is read, brought out of the Flash memory, and loaded into the SRAM while the processor runs out of the SRAM, maintains state and is able to run from the large amount of storage.

IoT designs also require high-density single-port register files. These memories are typically smaller than high-density single-port SRAM. Ultra-low leakage viaROM can be used for small IoT edge devices to store boot code that gets most of its program out of Flash. However, most of the major subroutines and drivers can be embedded into the ROM, and it's much more efficient for storage than Flash or even SRAM. Using an ultra-low leakage viaROM and source biasing in the SRAM can reduce leakage by up to 70 percent while maintaining data.

Ultra-low-power ROMs provide a shutdown mode for maximum leakage reduction by turning off power to the array when it is not being read. This results in cutting leakage to practically zero. Memories tend to be a large portion of the SoC, so the ability to zero out the leakage associated with the memory saves a huge amount of battery life.

Memories need to be tested during production and occasionally at power-up. Synopsys offers an embedded and external memory test repair and diagnostic system, STAR Memory System, which supports eFlash for IoT applications (Figure 6). It cuts area use via shared STAR Memory System processors, helping designers reduce the overall size of their ICs and systems. 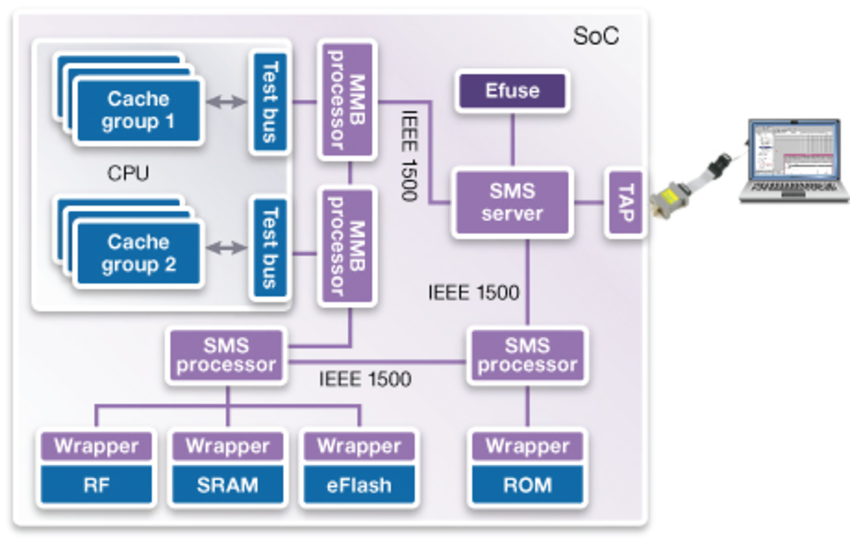 As designers make critical decisions for their IoT SoCs, they are keenly aware that the IoT space is crowded. The designer who achieves the lowest power for the given functionality is going to win. For a competitive edge, designers need to analyze the available logic libraries, embedded memories, and associated memory test solutions available for the low-power process of their choice to reduce their design’s overall power consumption.