Memory Options for the IoT

Due to the unprecedented growth in Internet of Things (IoT) devices worldwide, an evolution in new technology has been triggered, with a particular focus on memory. This article discusses the impact of IoT applications on current and emerging memory technology.

Volatile vs Non-Volatile Memory for IoT

From the storage perspective, memory can be categorized as non-volatile and volatile. Non-volatile memory (NVM) is capable of retaining data even after power is removed and generally has a lower speed than volatile memory. Volatile memory, on the other hand, does not retain data after power is removed and has higher per-bit storage costs. Therefore, volatile memory is usually used for primary storage when the memory interacts with a system-on-chip (SoC) frequently, while NVM is used for secondary/mass storage. However, this rule of thumb may be changing because NVM is now becoming faster and cost per byte is going down, leading to its usage for primary storage as well. With the advent of new IoT applications, designers need to continue to review the available options and decide on their memory type based on the application requirement.

IoT devices need to be inexpensive and small to appeal to the mass market; hence the silicon area of these devices becomes very important. Designers also strive to minimize wafer processing costs, as extra masks or processing steps results in increased cost. Instead of using a generalized, “one-size-fits-all” architecture, designers need to analyze the exact use models of their products to plan the architecture and memory accordingly.

Embedded NVM offers a performance advantage for IoT devices, as it makes it unnecessary to copy code to on-chip RAM on power up from external memory. The embedded multiple-time programmable (MTP) and one-time programmable (OTP) memory market has seen considerable growth as the memories are a strong fit for IoT dimension and performance requirements.

Embedded MTP NVM offers small on-chip reprogrammable memory for applications requiring longer battery life, since external memory consumes more power. External Flash is not cost effective as the “cost per bit” is high when the size is less than 1 Mbit; this is where the embedded MTP NVM becomes more useful. Along with the cost of external Flash, there is also a power penalty for Execute-in-Place (XIP) applications, which are executed directly from NVM, with no need for first bring-up in RAM. XIP applications have increased wake-up times due to unnecessary copy operations. External memory components may also pose a security risk for wearable IoT applications. Embedded OTP NVM has seen considerable growth, especially in networking and data-security applications. This is because it is low in cost, driven by ease of manufacturing. At the same time, it allows chips to store custom network media access controller (MAC) addresses, data encryption keys, network ID, authentication codes and firmware. The density of OTP NVM is comparable to that of Flash based storage arrays, yet it does not require the additional mask costs of Flash. As a result, CMOS-compatible OTP NVM is a cost-effective solution.

Due to its robust endurance, embedded flash (eFlash) memory is highly desirable in IoT applications requiring storage of critical data and code. The field programming capability provides great flexibility for last minute system-level changes. The market for eFlash memory has grown exponentially and is expected to grow further with the proliferation of IoT technologies due to its relatively high performance (>6.4 GB/s readout speed) and high density capable of supporting most microcontroller based applications.

Figure 1 provides a comparative measure of the various NVM technologies against their density and endurance. 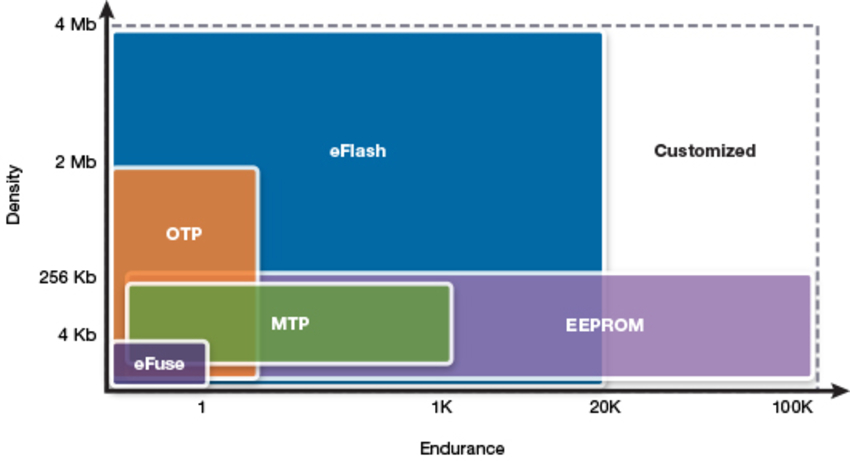 Traditional Flash memory will continue to be used in IoT applications around GPS/navigation and in consumer products like smartphones and e-readers due to its low cost, high density, XIP performance (True for NOR Flash), wide range of temperature support, architectural flexibility and, most importantly, a track record of reliability. NOR Flash is very popular amongst applications requiring code storage, such home gateway and set top boxes, because of its ability to support XIP applications and low standby power consumption, whereas NAND is more suitable for data storage applications that do not require XIP support. Data heavy IoT applications like intelligent USB drivers and wearable IoT devices require cheaper storage and will use NAND flash due to its low cost and higher capacity storage. Table 1 compares the key features of NAND and NOR flash. 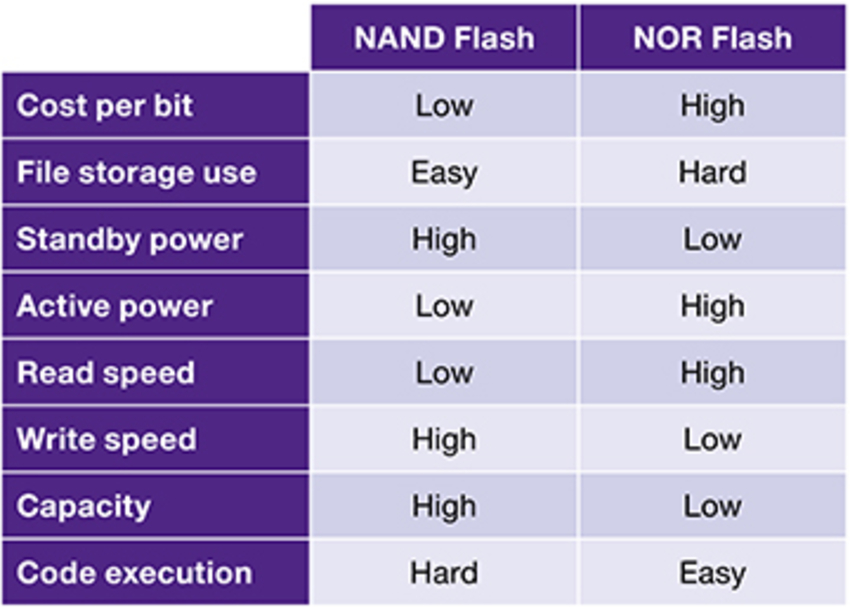 Table 1: NAND vs. NOR Flash features

IoT is expected to further push high end server, router, intelligent TV, smart phone and PC demand to cater to higher numbers of online devices. Devices with high end graphics and smart interfaces are going to be the key to success. This requires high end performance and computational power, which has been the forte of traditional DRAM (DDR/LPDDR) technology.

The traditional DRAMs (DDR2/3/4 and LPDRR2/3/4) are available as discrete components in various densities ranging from 32 MB to 2 GB, whereas commercial DIMMs (multiple DRAMs put together) can accommodate storage up to 128 GB. 3DS technology is another step towards not only increasing memory storage beyond the maximum available DIMMs but also simultaneously decreasing power consumption. There is a margin of decrease in power consumption because there are no more physically connected DRAMs (to create DIMMs) on board, but rather a single chip wherein multiple layers are stacked during chip manufacturing.

Low power DDR (LPDDR2/3/4) will continue to dominate the mobile and hand held device market. LPDDR4 draws 1.2V of power compared to 1.5V required by LPDDR3, resulting in more than a 20% drop in power requirements, together with high speeds of 3200 MHz. LPDDR3’s performance is more than capable of serving most IoT applications, which require low power and higher performance.

Synopsys has been the market leader in the traditional DRAM controller and PHY market for years. The DesignWare® Enhanced Universal DDR Memory and Protocol Controller IP feature a DFI-compliant interface, low latency and low gate count while offering high bandwidth. Along with providing DDR controller and PHY, Synopsys also provides Verification IP for DDR and other memory protocols, which can be used to accelerate IP verification.

The IoT market is going to be driven by low cost devices involving sensors, meters, robots, wearable devices and consumer electronic products. eMMC memory is quite suitable for such applications because of its low cost and ability to act as a replacement for traditional storage media.

The eMMC standard was developed to simplify application interface design by moving the flash controller interacting with flash memory in the memory itself. The simpler design benefits IoT memory developers by reducing the footprint for memory devices and therefore lowering costs. The eMMC 5.1 specification allows for fast transfer speeds of up to 400 MB/s and capacities up to 128 GB.

eMMC is going to see tough competition from UFS 2.0, which offers higher data transfer speeds and lower power consumption than eMMC, and is often considered a successor to the eMMC standard. It is expected to drive both the embedded and removable flash memory-based storage in IoT devices. The evolution from eMMC to UFS offers benefits in terms of both performance and low power. On the performance side, it offers 600 MB/s compared to 200 MB/s for eMMC while on the power side it offers 30% to 55% power reduction. UFS’ higher performance is also the result of architectural changes in the interconnect layer. UFS has serial and full duplex interconnect while eMMC has parallel and half duplex interface, which was blocking the higher speed operation and efficient executions of the commands.

IoT applications will continue to drive the development of various memory technologies, with each type of application having a unique set of requirements. However, it is clear that cost and power will be a challenge because the majority of IoT market expansion is going to be driven by wearable devices, which will thereby push embedded NVM and external NVM towards future growth.