USB Type-C has arrived! Products have been announced in almost every conceivable product category, and many are shipping in volume. Consumers appreciate the simplicity of the new USB Type-C connector and expect most products with USB to offer Type-C connectivity in the near future.

Many of the initial products using the Type-C connector run at the USB high-speed rate of 480 Mbps. This article will help designers who plan to convert existing high-speed USB products using older ASICs or SoCs without native USB Type-C support.

The Type-C receptacle, with 24 pins, is only slighter larger than a 5-pin micro-USB receptacle. Most existing products with micro-B USB can easily be modified mechanically for Type-C by mounting the receptacle low on the PCB (midmount) as shown in Figure 1. 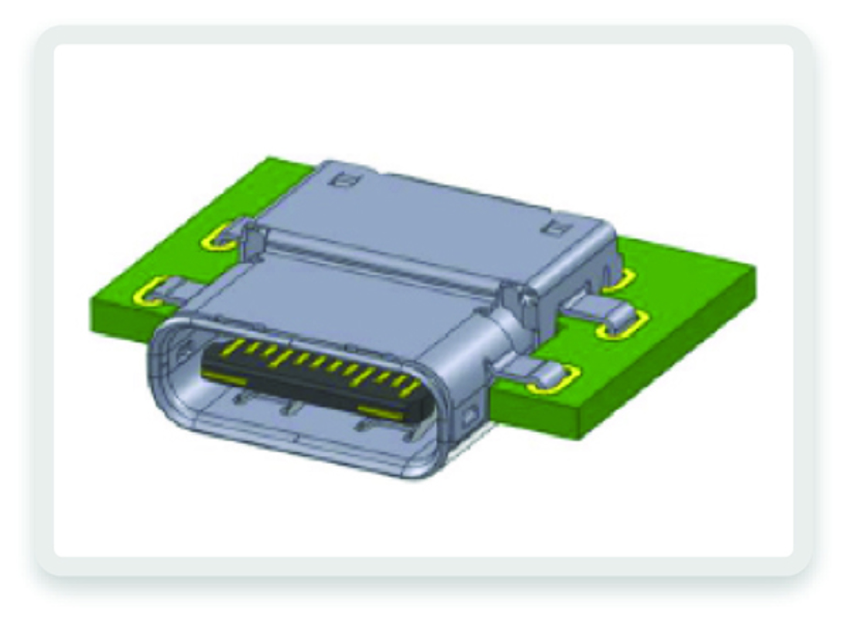 Orientation-agnostic insertion of a Type-C plug is possible due to signaling duplication with symmetry around both X and Y-axis in the Type-C receptacle (Figure 2). SuperSpeed (5G) signal integrity suffers when routing the same SuperSpeed RX/TX signals to both positions in the receptacle. SuperSpeed signaling uses dual PHYs or a switch to route the active signal to the appropriate receptacle pins. The active receptacle position depends on the plug orientation.

High-speed USB requires significantly lower bandwidth than SuperSpeed or SuperSpeedPlus (10G), so high-speed D+/D- signals are centered in the receptacle. This allows the high-speed USB D+/D- pins to be routed to both positions (pins A6/A7 and B6/B7) without affecting signal integrity. This solution simplifies the conversion of high-speed, full speed or low speed products to Type-C.

For classic USB connections, the host and device roles were determined by connector type: standard-A for hosts, standard-B or micro-B for device, and micro-AB for dual role. For micro-AB, the ID-pin determines host or device. The new Type-C hosts and Type-C devices use the same receptacle. No ID pin is required because Type-C products signal host, device or accessory roles with pullup and pulldown resistors (Figure 3).

The symmetrical Type-C cable allows two hosts to be connected. To prevent two host Vbus power supplies to be connected, hosts do not enable Vbus until a device has been connected. Connecting two Type-C devices together is possible but will be inconsequential unless one or both devices can become a host.

The standard USB current from a high-speed host is 2.5mA max in suspend, 100mA max until configured and 500mA max when configured as a high-power device. Many mobile products benefit with faster charging if they can charge their batteries with a higher current. A dedicated charger or charging downstream port (host charger) can provide between 500mA and 1.5A to the connected device. Type-C introduces even higher current capability. Different values of host pullup resistor (Rp) indicate standard USB current, guaranteed 1.5A, and guaranteed 3A currents.

To utilize these higher current levels, a device must detect the resulting voltage on CC of the combination of host Rp and device Rd. This requires precision comparators that are typically integrated with the battery charging circuitry.

How to Implement a High-Speed Device with Type-C

Creating a standard high-speed device with Type-C connectivity is easy to implement with a standard USB 2.0 PHY.

Just as with a standard-B or micro-B device, USB operation starts when Vbus is detected.

How to Implement High-Speed Host with Type-C

A high-speed host with Type-C connectivity is more complex than the device.

Unlike a standard-A host, Vbus is not provided to the receptacle at all times. Vbus can only be provided when a device is attached. After Vbus is provided, normal USB device detection, high-speed chirp and USB operation will commence. Mobile devices will save power as they do not need to enable Vbus at all times.

How to Implement High-Speed Dual Role Port with Type-C

Products with micro-AB receptacles can act as either host or device. The host or device role is determined by the cable orientation and the ID pin is floating for device and grounded for host role. While the host/device role can be changed dynamically using Host Negotiation Protocol (HNP), the HNP is not widely used. Most products that claim to be on the go (OTG) capable are actually dual role capable. Dual role devices (DRDs) have a static host or device role depending on cable orientation and do not support OTG with dynamic role switching. This distinction is useful to keep in mind when designing a Type-C Dual Role Port product.

As stated, Type-C cables have no orientation and the receptacle does not use an ID pin. Therefore, the host/device role is determined by pull resistors Rp and Rd. A connection between two Type-C devices requires that one device is configured as a host and the other remains as a device. For static Dual Role Port, host or device role can be decided before the cable is connected—for example, the user can configure the host mode before connecting a thumb drive, a keyboard or similar device.

To implement a Dual Role Port with Type-C functionality, designers need to consider the following in addition to the implementation points for high-speed devices and hosts.

SuperSpeed products with Type-C connectivity must detect the connector orientation. As there is only one CC wire in the cable, orientation is detected via the pull resistor on either CC1 or CC2. The appropriate switch position is determined by the result. A Type-C host can use the same two comparators as for device attach. A Type-C device must add two comparators with nominal detection level of 0.20V. Again, this adds cost and complexity to SuperSpeed products with Type-C.

Fortunately, converting a USB dongle or a device with a captive cable to Type-C is easier. For example, a SuperSpeed USB Thumb Drive does not need the datapath switch. Since the Type-C connector is already connected to the product, the orientation cannot be changed, nor does the orientation need to be detected by the device. The required SuperSpeed datapath switching and orientation detect is done by the host, depending on the orientation of the thumb drive. Additionally, only one pulldown resistor (Rd) is required.

Complexity, area and cost for discrete external circuitry to support Type-C can become prohibitive for many products even though multiple companies have introduced Type-C support chips. Functionality in these chips range from programmable resistors and comparators to complete Power Delivery communication with dynamic dual role port support. Some support chips also include the SuperSpeed dual datapath switch required for SuperSpeed Type-C products.

Each product designer must determine whether to use external support chips or discrete components.

Multiple Type-C products have been launched and are shipping in volume using standard USB PHYs that were not designed or optimized for Type-C. Converting a high-speed USB product is reasonably easy and offers fast time to market.

How Secure is Your Face?