In recent years, cell phone technology has evolved from voice phones, to feature phones, to smart phones, and now to super phones. These latest cell phones are powerful devices that handle a lot more than simple voice communication. They act as multimedia players, set-top boxes, game consoles, cameras, and even PCs. All of this functionality is packed into a small device that fits into the palm of your hand.

However, this small form factor brings with it two major problems: 1) the screen size of a device that fits into the palm of your hand can never be satisfactory for high-end digital entertainment applications; and 2) the battery technology that powers these mobile phones has not kept up with the functional demands.

Mobile high-definition link (MHL) is a new interface protocol that addresses both of these challenges. MHL provides wired high-definition audio/video connectivity between a mobile device (typically a cell phone or tablet) and a digital home display device (digital TV). In addition, MHL technology incorporates the capability to charge mobile devices while they are connected to a display device.

MHL is gaining popularity because it leverages the ubiquitous connection ports found in almost every household. MHL does not attempt to define a specific or unique connector, but it instead maps into already-popular connectors. For example, the most popular connector on cell phones is USB 2.0, and on DTVs it is HDMI. The MHL protocol works seamlessly with USB 2.0 and HDMI protocols and connectors. A typical MHL cable has a Micro USB connector on one side and an HMDI connector on the other.

The MHL Consortium was founded in 2009 with the goal of providing a seamless link between mobile devices and HDTVs. For the Consortium to be successful, it needed support from both cell phone/tablet and DTV manufacturers, and its five founders (LG, Nokia, Samsung, Silicon Image, and Sony) represented leading consumer electronic giants of both cell phones and DTVs.

Backed by these strong founders, the MHL ecosystem is evolving quickly. As of 2012, there are over a dozen providers of mobile devices, and over a half-dozen providers of digital home devices, that have made major product announcements with MHL support. For example, there are products that integrate the entire functionality of a set-top box onto an “MHL dongle” that is about the size of a USB thumb drive. These dongles are typically Android-based systems with integrated WiFi access. Once plugged into a DTV, the dongle acts like a portable set-top box that does not require any external power supply as it derives its power through the MHL VBUS.

One of the key challenges for MHL is that most legacy DTVs do not support MHL. Indeed, the refresh rate of DTVs is very long, typically 10 years, unlike cell phones, which are replaced every 1-2 years. This problem has been circumvented with the use of MHL-to-HDMI dongles like the HTC dongle shown in Figure 2. The price of these dongles has dropped to ~$10. The purpose of the second USB connector on the dongle is to provide battery charging since the HDMI protocol does not support any power charging as of version 1.4. Although the dongles provide a cluttered solution, it is a good compromise until MHL DTVs penetrate the market. 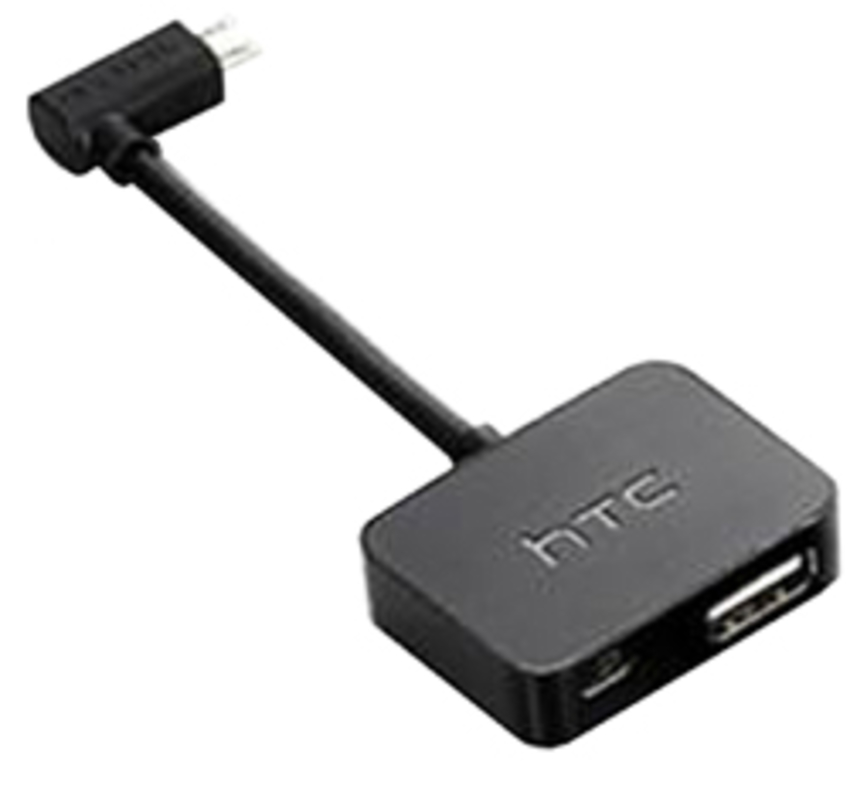 The MHL technology is largely leveraged from HDMI technology but requires five signals/connector pins versus the 19 signals/connectors pins required by the HDMI protocol. It is essential for MHL to contain itself to 5 signals for it to map to a USB 2.0 connector. MHL supports a maximum bandwidth of 3.0 Gbps for up to a 1080p signal in a packed pixel mode of operation. MHL also supports HDCP technology, up to 7.1 surround audio formats, and power charging of up to 900mA at 5V. In addition, MHL supports Control BUS (CBUS) functionality that enables access to mobile content through a DTV remote control.

The MHL link shown in Figure 3 consists of a single differential Transition Minimized Differential Signaling (TMDS) pair. The MHL clock is the common mode of differential data signal and does not require separate pins/signals. Compare this to the three differential TMDS pairs, plus a differential clock pair, required in an HDMI link. In Figure 3, the red, green, and blue data signals are essentially time domain multiplexed in a single TMDS channel. Hence in case of MHL protocol, a single TMDS channel represents three logical data channels and the clock channel. In addition, the MHL link also consists of a CBUS and a VBUS. The CBUS protocol lets the user access the content on a mobile device via the DTV’s remote control. The VBUS is the power pin that allows for charging up to 900mA at 5V.

MHL performance is defined up to 2.25 Gbps in normal mode of operation that can support a 1080i/720p, 60Hz, 24 bit color signal. As shown in Figure 4, in the normal mode of operation, the three logical red, green, and blue channels are multiplexed into a single physical channel. The pixel clock is running at 75MHz and the 10 bits per logical channel (30 bits total) are multiplexed to get a bandwidth of 2.25 Gbps.

MHL also defines a packed pixel mode of operation up to 3 Gbps that can support up to a 1080p, 60Hz, 16 bit color signal. As shown in Figure 5, two logical channels are multiplexed into a single physical channel when operating in packed pixel mode. The MHL clock is running at 75MHz and it clocks out 40 bits per second to get a bandwidth of 3 Gbps.

MHL won a “Best of the CES 2012” award along with many other accolades. It solves an important problem in the industry and has an excellent potential to rapidly penetrate the consumer electronics market and to be adopted in mainstream technologies. For more information on MHL, please contact designware@synopsys.com.