Most of the processors contained within automobiles are relatively small and with modest memory requirements that can be served by SRAM and non-volatile memory. The type of computing, image processing, and graphics displays that are possible with a more powerful CPU connected to DRAM have largely been restricted to the non-safety-critical infotainment system in the vehicle – until now. Advanced Driver Awareness Systems (ADAS) and self-driving vehicle systems demand powerful processors that require the memory capacity and bandwidth that is only possible with DRAM. Designers need to understand the benefits of using DRAM in safety critical automotive systems, as well as common concerns regarding error rates and meeting stringent automotive standards such as ISO 26262.

DRAM vs SRAM in Automotive

DRAM chips are prevalent as the main memory in many of our computing devices: home and office computers, servers and networking, mobile devices, televisions, and set-top boxes. The largest DRAM manufacturers represent three of the top 10 largest semiconductor manufacturers, selling a combined 14.7 billion DRAM chips worth a total of $45 billion dollars in 20151. 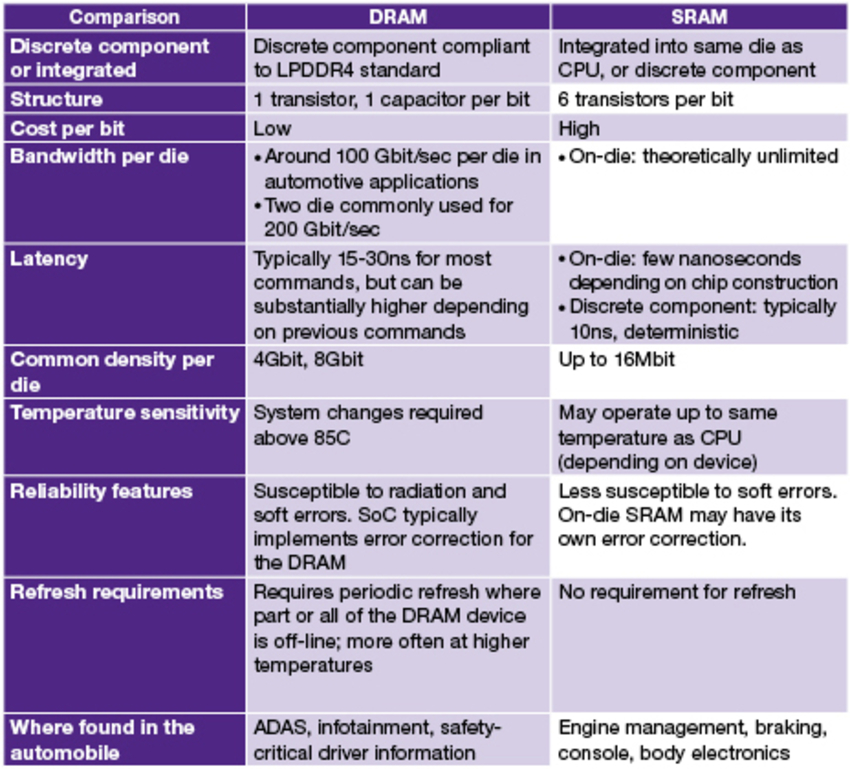 Table 1: DRAM vs SRAM Use in Automotive Applications

Yet with the huge volume of DRAM devices that are sold, only a tiny fraction of them go into vehicles. In Synopsys’s experience, out of more than 1000 design wins for DDR SDRAM interface IP, only about 5% have gone into chips used in automobiles – and many of those automotive designs that are using DRAM have often been in the region of infotainment rather than in safety-related systems.

However, things are changing for DRAM in the automobile. Displays are beginning to replace analog gauges for driver information on speed and status – a safety-critical application. The industry is showing huge interest in the concept of the self-driving automobile, and while that is clearly a long-term goal, ADAS features such as advanced navigation systems, adaptive cruise control, lane departure warning, collision warning and avoidance capability, etc. are already becoming prominent in today’s vehicles.

Benefits of DRAM in the Automobile

DRAM is an enabling technology for these three automotive advances:

With these applications coming on-line, DRAM will be increasingly required for vehicles. DRAM will not replace SRAM, which will continue to be used for braking and engine management, but will provide new capabilities in ADAS and driver information.

A study by the Highway Data Loss Institute showed that, for similar vehicles available with or without the optional ADAS features of Camera-Based Forward Collision Warning and Lane Departure Warning, the ADAS-equipped vehicles had fewer collisions and at least a 20% reduction in insurance losses for bodily injury liability and medical payments compared to the non-ADAS equipped cars.2

A group of 20 auto manufacturers representing 99% of automobiles sold in the US have said that the ADAS feature of Automatic Emergency Braking (AEB) will be standard across all their vehicles by the year20223. If the driver is distracted, unskilled, or otherwise unable to recognize an imminent forward collision, AEB may automatically applies the brakes, preventing or reducing the severity of the collision.

The core of a DRAM chip is an analog array of bit-cells that operate by storing a small amount of charge on a capacitor within each bit-cell – just a few tens of femtoFarads or just a few tens of thousands of electrons per bit, on a DRAM device with 4 or 8 billion bits per die. When introducing DRAM into a vehicle, we need to make some adaptations to the system to allow for the expected reliability under the operating conditions typically found in the vehicle.

One of the fundamental issues with DRAM bit-cells is that they leak charge and need to be periodically refreshed to avoid the loss of data in the memory. The rate of leakage is dependent on the temperature, leaking more at higher temperatures. Many automotive manufacturers have opted to put their camera-based ADAS modules on the windshield, where they benefit from being cleaned when the windshield is cleaned, but they also suffer from being in direct sunlight and potentially at a very high temperature when the vehicle has been parked in a hot climate in full sun. The operating temperature range for most automotive applications surpasses the normal DRAM operating range common to PC type applications which results in specially designed DRAMs targeted towards automotive applications.

The most common DRAM device for new ADAS designs is the LPDDR4 SDRAM. LPDDR4, originally designed for mobile devices offers a balance of capacity, speed and form factor that is attractive for automotive applications. As a result, LPDDR4 has been automotive qualified by DRAM manufacturers and is available in automotive temperature grades.

In traditional DDR DRAM designs such as servers and networking chips, any error correction is usually transmitted side-band to the DRAM data. However, when using LPDDR4 devices, the arrangement of LPDDR4 into 16-bit channels, 2 channels per die, 2-4 dies per package, 4 channels per package means that it is highly impractical to implement sideband pins with which to transmit sideband Error Correcting Code (ECC) data. In that case, an in-line ECC scheme may be used, which transmits the ECC data on the same data pins as the data it protects (Figure 1).

When considering a SoC design to connect with off-chip DRAM, the SoC may be required to meet certain automotive reliability standards – typically AEC-Q100 and ISO 26262.

Hardened IP for implementing the DRAM interface can meet AEC-Q100 requirements with careful design and characterization. This includes both reliability and temperature components.

ISO 26262 has several requirements with components of process, design and certification among them. A core requirement is to have a defined design safety methodology and a safety manager tasked with implementing the processes. The DRAM interface IP requires extra circuits to periodically test the interface to make sure that the majority of errors that violate safety goals can be detected within a fraction of a second. Typically, a third-party certification is performed to rate the compliance of the design and assign an ASIL rating. The majority of automotive designs require at least ASIL B protection of the DRAM interface, while some designs may require ASIL D, the highest level of protection reserved for safety processors and their associated circuits.

DRAM devices are an enabling technology for advancements in automotive safety, features, and convenience. With careful design and stringent process, DRAM can be introduced into safety-critical areas of the automobile to provide high bandwidth and large capacity to enable the computing necessary for driver information systems, ADAS, and self-driving vehicles.