Hyperscale data centers need to scale appropriately as increased demand is added to the system. For the required server-to-server communication in hyperscale data centers, Ethernet has become the primary network protocol of choice as it allows hyperscalers to disaggregate network switches and install their software operating systems independently. Ethernet enables cost-effective, dense, open switches and networking technologies which reduce cost/power per bit with transistor scaling. Ethernet is a computer networking technology that defines physical and data-link layers of the Open Systems Interconnection (OSI) model. The IEEE 802.3 standard describes these functions in an architectural way with emphasis on the logical division of the system and how they fit together. Data link layer, consisting of Media Access Control (MAC) creates Ethernet data frames and uses the underlying Ethernet physical layer to transfer the data frame through a medium.

This article describes the Ethernet PHY used in high-performance computing (HPC) system-on-chips (SoCs) and how an integrated MAC + PHY IP can accelerate path to compliance and design closure.

For example, most personal computer users are familiar with “Ethernet cables” in their laptops/PCs. Figure 1 shows a simplified block diagram describing how data is transferred to and from the processor over an Ethernet cable. In this use case, Ethernet data frames (packets of data), assembled by Ethernet MAC in the CPU, travel across the mother board (a printed circuit board) through MII/GMII, defined by the IEEE802.3 standard, before reaching an Ethernet PHY which transmits electrical signals over twisted pair cables through RJ 45 connectors.

Figure 1: A simplified example of Ethernet data packets traveling from the processor to the Ethernet PHY in a personal computer

Figure 2 shows a data center as a network of compute and storage systems connected with optical and copper media. Optics offers a power-efficient way for long-distance Ethernet links with Single Mode Fiber (SMF), providing the longest reach as it uses single path through the fiber. Multi-Mode Fiber (MMF) offers a more cost-effective alternative to SMF and is typically for disctances of 500 meters or less. A server rack unit to Top of the Rack (TOR) switch links are generally implemented using twin-axial copper cables, generally referred to as Direct Attach Copper (DAC) cables. 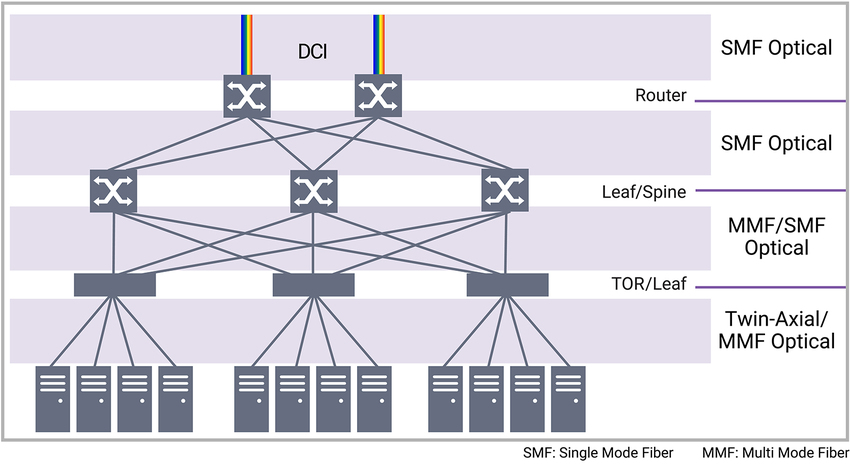 Figure 2: Usage of different types of optics in a server-to-server communication in a data center

Figure 3: Movement of data packets in a rack unit of a server farm

Figure 3 shows data packets traveling in a data center, originating from a processor in one of the rack units of a server farm. Data from the processor goes to the network interface card (NIC) through a PCIe interface. The network interface card creates Ethernet frames by implementing MAC functions. The frames travel to the Top-of-Rack (ToR) switch through a twin-axial copper PHY or DAC cable. Depending on the DAC cable length and the switch silicon in ToR rack unit physical location, retimers may be used. These retimers implement back-to-back backplane Ethernet PHYs to extend the reach of electrical signals. The ToR switch routes the frames and the optical module converts the medium from electrical to optical by implementing both electrical and optical PHY functions. 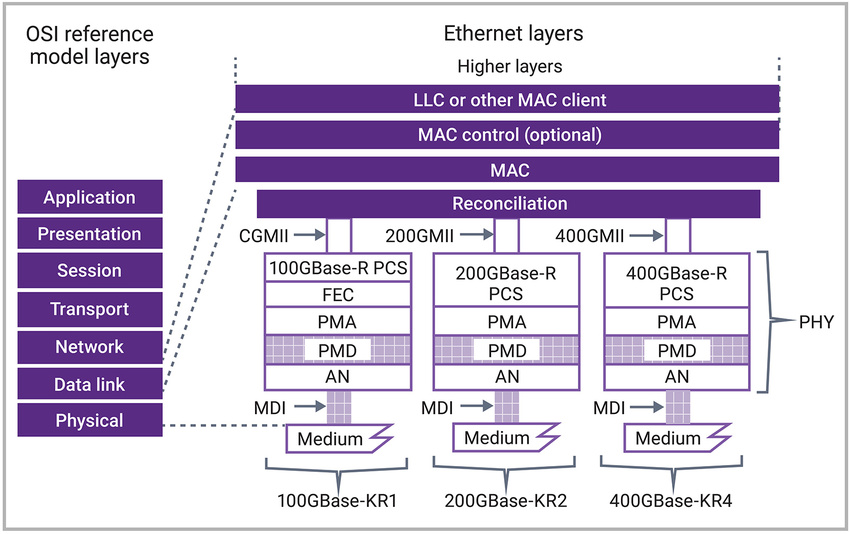 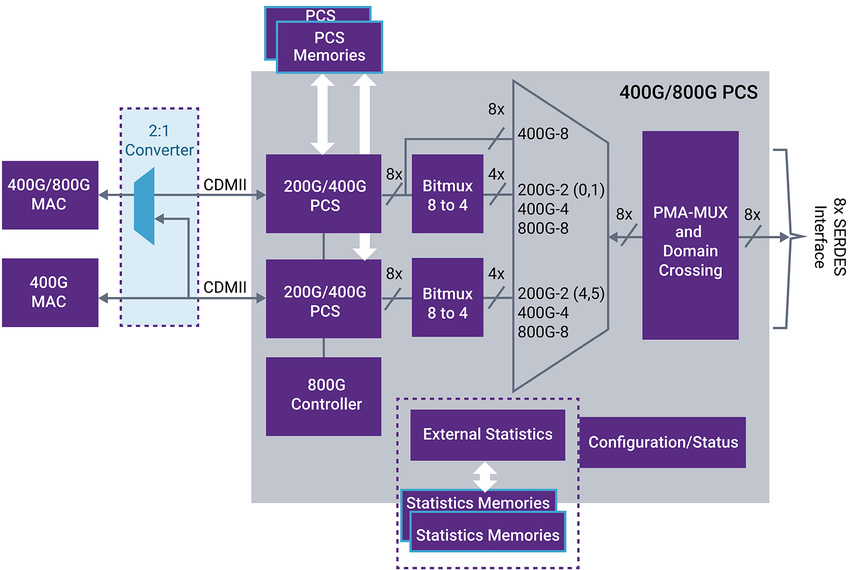