Modulators dictate the footprint, power consumption, operational stability, and bandwidth of integrated photonic transceivers. In lumped modulators, reducing the modulator length to achieve a smaller footprint results in higher switching voltage (i.e., higher power consumption). This efficiency-bandwidth tradeoff can be minimized by having optical and radio frequency (RF) signals interact over the entire propagation length. In traveling-wave Mach-Zehnder Modulators (TW-MZMs), the RF electrode acts as a transmission line as opposed to a concentrated capacitor, as is the case in lumped modulators. Foundry process variations can introduce parameter fluctuations that can adversely affect the modulation efficiency and bandwidth. This application note explores how some of these variations can impact the yield.

Although SiPh TW-MZMs are relatively tolerant to fabrication imperfections, they are not completely immune to wafer-to-wafer (WTW) and run-to-run (RTR) variations. Co-packaging CMOS photonic integrated circuits (PICs) with silicon photonic (SiPh) electro-optic devices such as TW-MZMs has recently received industry attention. The deviations in electrical trace (metal routes) characteristics have an impact on PIC performance, thereby also influencing packaging considerations such as placement of the chip on a die, placement of electrical pads, and vias. Accurate modeling of important performance metrics depends on a simulation tool’s ability to capture inherent randomness associated with underlying physical phenomena. The simulation too must also account for the random fluctuations arising from ambient and production environments. As described in this case study, Synopsys’ OptSim™ Circuit [1] tool is useful for such analyses.

We begin by building a TW-MZM device in OptSim Circuit and outlining options to model both the optical and the RF propagation. Later, we estimate the impact of foundry processes on the performance of a transmitter chip that uses the TW-MZM. We also analyze the impact of deviations in key design parameters on the bandwidth of the device. This case study helps photonic foundries estimate yield and helps chip designers understand performance bounds due to design choices and tolerances in the fabrication and packaging.

The basic building block of a TW-MZM is a traveling-wave phase shifter. As shown in Figure 1, the principle of operation of a traveling-wave electro-optical component is the distributed interaction over a region in space between electrical and optical signals propagating in a transmission line and in a waveguide, respectively.

As discussed previously, each traveling-wave phase shifter has an optical waveguide and a surrounding electrical transmission line that introduces change in the waveguide’s refractive index and propagation loss. The interaction between the electrical and optical signals is distributed along the propagation direction. Thermal behavior of the waveguide (and modulator) is modeled using the derivative of effective index, parameter VπL, and propagation loss as functions of temperature [2]. Depending on the design-objectives, designers can also compute optical and RF modes, as well as their dispersions, in Synopsys’ FemSIMTM [3], and Multi-Physics UtilityTM [4] tools. This is the approach chosen in [5]. In this case study, we use analytical models for optical and electrical propagation and their distributed interactions as described in [2].

OptSim Circuit provides a number of options [6] to capture stochastic variability in model and process parameters. One option is to associate mean, variance, and distribution to the parameters of interest. Parameters are then scanned over a large number of Monte Carlo runs. To estimate the resulting performance, a test circuit is created as shown in Figure 3.

A data source followed by the electrical drive circuit drives the modulator in a push-pull mode. The electrical traces for RF connections are modeled by electrical transmission lines. The microwave connection compact models at both ends of the modulator model source and load impedances at each of the two traveling-wave electrodes. An optical eye analyzer at the output of the modulator measures the optical extinction ratio. In addition, a receiver followed by an eye diagram analyzer and bit error rate (BER) tester measure quality of the received signal.

We know that the velocity mismatch between the optical wave and the radio frequency wave can limit the performance of the TW-MZM [7]. For example, Figure 4 shows the bandwidth narrowing due to a 10% mismatch in effective indices. 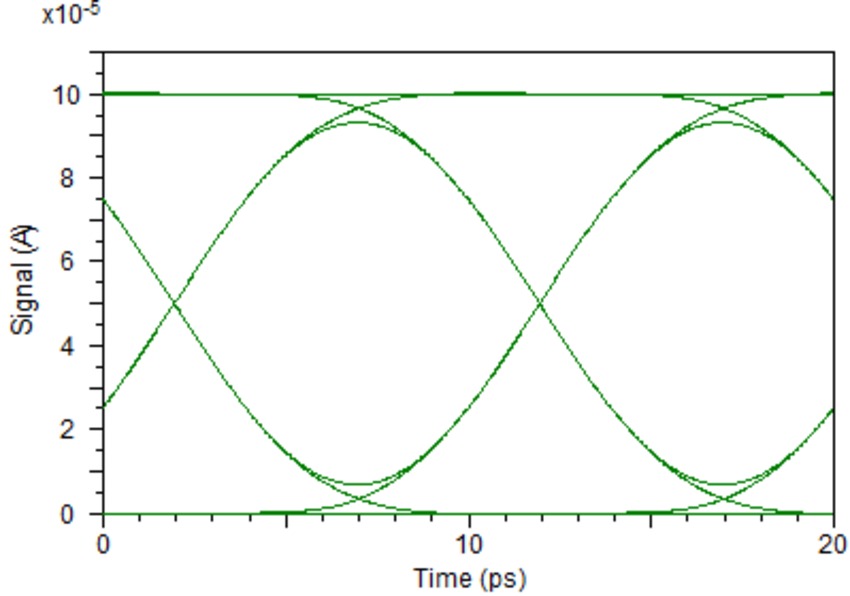 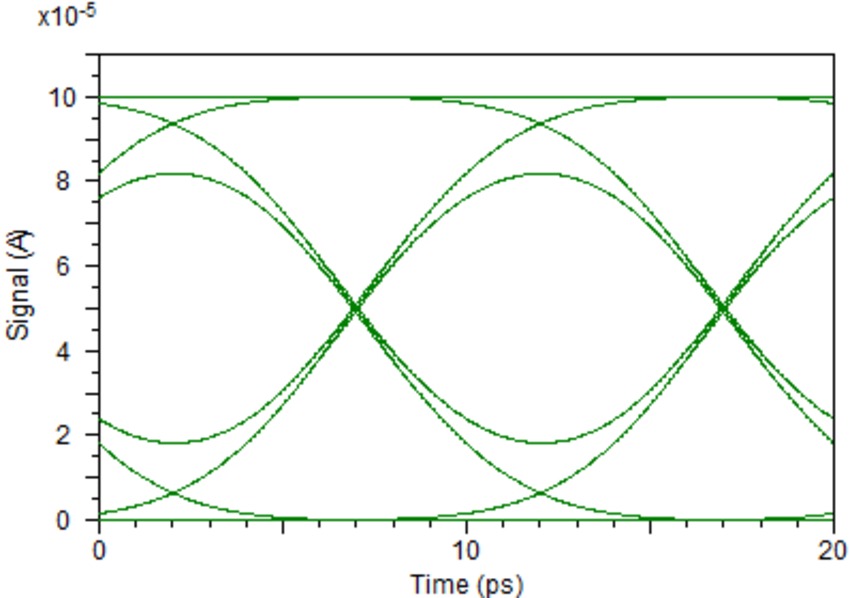 Figure 4. Eye closure (right) due to 10% mismatch between RF and optical effective indices.

The effective index mismatch (whether by design or due to manufacturing tolerances) is not the only factor limiting the device bandwidth. The traveling-wave nature of the modulator makes it sensitive to reflections from impedance mismatch in the traveling-wave electrode [5]. This could also happen in the optical waveguides, but for the moment we will assume that the effective index remains constant and doesn’t introduce any reflection. RF trace length variations and imperfect terminations, whether on-chip or off-chip, could result in reflections causing bandwidth limitations.

A useful measurement is the modulator’s extinction ratio. Figure 5 shows the extinction ratio measured from an optical eye at the TW-MZM output due to 15% mismatch between the phase shifter electrode and the load. 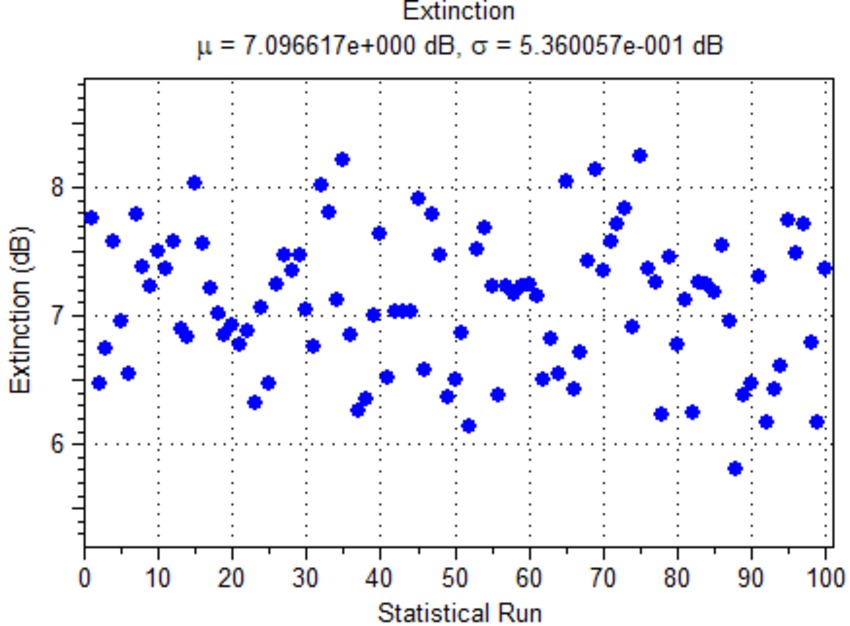 Figure 5. Extinction ratio measured from an optical eye at the MZM output for 15% impedance mismatch.

The mean value of the extinction ratio is 7dB, with approximately half-a-dB of deviation around it. Equivalently, when measured in terms of back-to-back BER, the plots look like those in Figure 6. 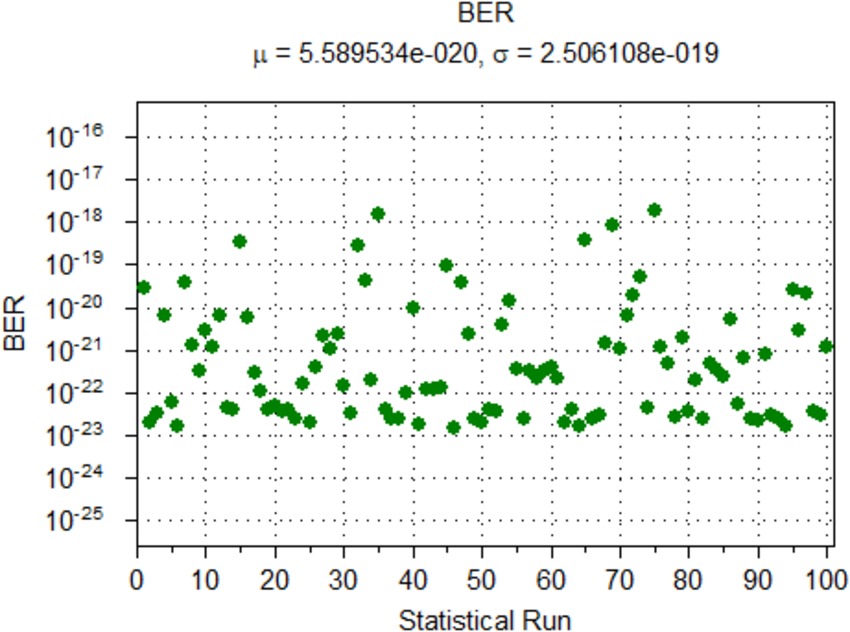 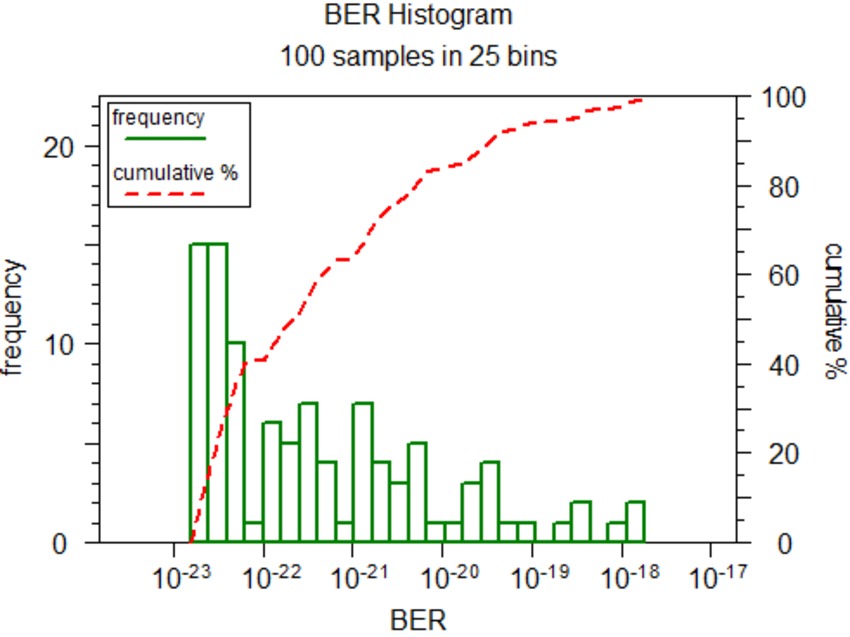 For the current case study, the overall performance is good, although the 15% impedance mismatch results in fluctuations in BER on the order of 5 decades. This is a large performance fluctuation. The corresponding histogram on the right can be interpreted as an estimated yield for over 100 manufacturing runs for a given performance threshold.

Finally, we consider one more factor affecting the speed of modulation: the RF losses [8]. Due to the skin effect, electrode resistance grows with the frequency of the modulating signal. This, together with its influence on impedance mismatch, can significantly impact the modulation bandwidth. Figure 7 shows extinction ratio measured from an optical eye at the TW-MZM output due to 10% fluctuations in RF losses. 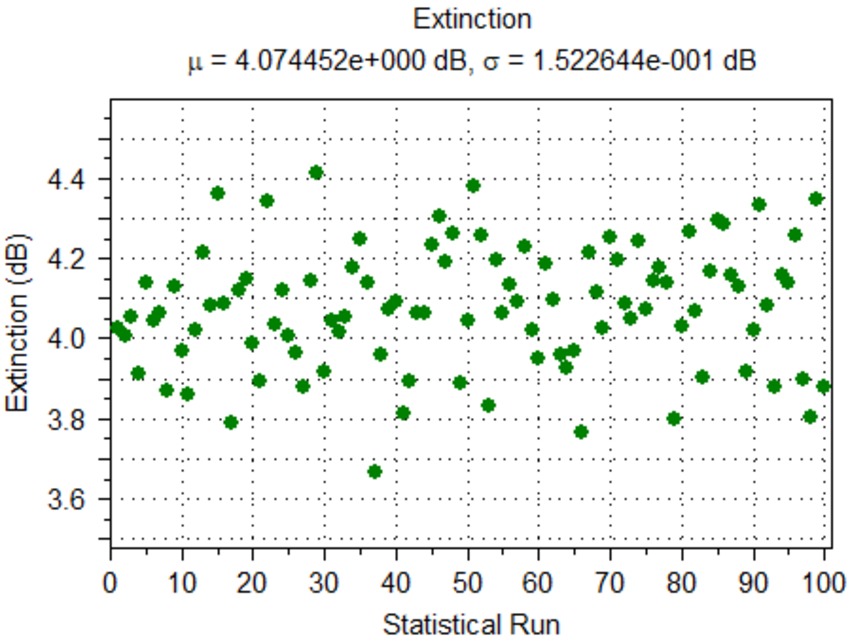 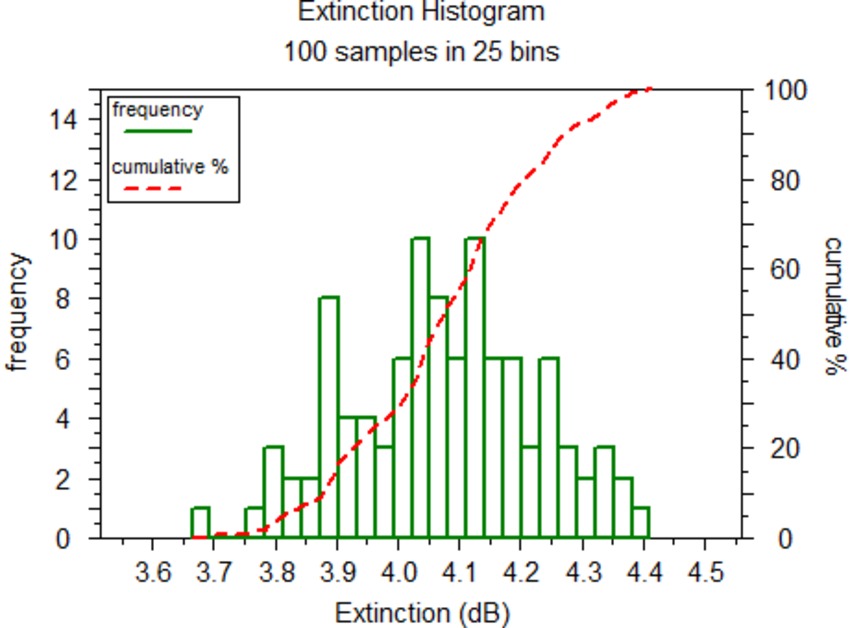 Figure 7. Extinction ratio (left) and its histogram (right) for 10% fluctuations in RF losses.

A quick glance at Figures 5 and 7 shows that for the current case study, 10% fluctuations in RF losses had much more dramatic impact than 15% fluctuations in impedance mismatch. The histogram on the right can be interpreted as estimates of yield over 100 manufacturing runs for a given performance threshold.

In this case study, we studied various fluctuations in isolation to understand the resulting impairments. We also used Monte Carlo simulations to change multiple factors simultaneously, with and without inter-dependency of statistics. For more information and to request a demo, please contact photonics_support@synopsys.com.