Simulation of Neuromodulation in Schizophrenia

Posted on May 22, 2018 by Wolfgang Gentzsch, President and Co-Founder of the UberCloud

Sensitivity of the temporal-interference region deep inside the brain based on electrode placement on the scalp (Courtesy: Dassault Systemes SIMULIA).

In a series of challenging high performance computing applications in the Life Sciences, UberCloud High Performance Computing (HPC) Containers have been packaged recently with several scientific workflows and application data to simulate complex phenomena in human’s heart and brain. As the core software for these HPC Cloud experiments we are using the (containerized) Abaqus solver running in a fully automated multi-node HPE environment in the Advania HPC Cloud. Synopsys Simpleware™ medical image processing software was used in this project to build realistic models from 3D imaging data, enabling simulation of anatomical processes.

Treatment of Schizophrenia is Complex, Lengthy, and often Risky

The brain is the most complex organ of the human body and it therefore follows that its disorders such as schizophrenia are equally complex. Schizophrenia is a complex chronic brain disorder that affects about one percent of the world’s population. When schizophrenia is active, symptoms can include delusions, hallucinations, trouble with thinking and concentration, and lack of motivation.

Treatments for schizophrenia are diverse and personalized to patients, whereby finding the right treatment regime can take a long time. As an alternative to drugs, Deep Brain Stimulation (DBS) is being applied to treat schizophrenia, involving implanting electrodes within certain areas of the brain to produce electrical impulses that regulate abnormal impulses in a patient’s brain. However, this treatment is intrusive and carries risks of stroke, cerebrospinal fluid (CSF) leakage, bleeding, etc., and can also be costly and unsuitable for individual health conditions. Invasive surgeries involve drilling small holes in the skull, through which the electrodes are inserted to the dysfunctional regions of the brain to stimulate the region locally (Courtesy: Mayo Clinic).

In recent years, so-called transcranial Direct Current Stimulation (tDCS) has been introduced which is a new form of non-invasive neurostimulation that is used to safely treat a variety of clinical conditions including depression, obsessive-compulsive disorder, migraine, and central and neuropathic chronic pain. tDCS involves the injection of a weak (very low amperage) electrical current to the head through surface electrodes to generate an electric field that selectively modulates the activity of neurons in the cerebral cortex of the brain. Extensive neurophysiological research has shown that direct current electricity modifies neuronal cross-membrane resting potentials and thereby influences neuronal excitability and firing rates. And, tDCS is inexpensive, lightweight, and can be conducted anywhere. In the last six years, UberCloud has performed 200 cloud experiments with engineers and scientists and their complex applications. This latest HPC cloud experiment is based on computer simulations of a novel non-invasive transcranial electro-stimulation of the human brain to treat schizophrenia. The experiment has been collaboratively performed by the National Institute of Mental Health & Neuro Sciences in India (NIMHANS), Dassault SIMULIA, Advania, and UberCloud, and generously sponsored by Hewlett Packard Enterprise (HPE) and Intel.

The current work demonstrates the high value of computational modeling and simulation, including model generation in Simpleware software, for improving the clinical application of non-invasive transcranial electro-stimulation of the human brain in schizophrenia. NIMHANS is India’s premier neuroscience organization involved in clinical research and patient care in the area of neurological and psychiatric disorders. Since 2016, Dassault Systemes has been collaborating with NIMHANS on a project to demonstrate that computational modeling and simulation can improve the efficacy of Transcranial Direct Current Stimulation (tDCS), a noninvasive clinical treatment for schizophrenia. Successful completion of the first stage of this project has already raised awareness and interest in simulation-based personalized neuromodulation in the clinical community in India.

Our project demonstrates an innovative method that can stimulate deep inside the brain noninvasively/non-surgically, using multiple electric fields applied from scalp. This procedure is able to precisely activate selective regions of the brain, leaving minimal risk and also making it affordable to all. With this method clinicians can precisely target regions of the brain without affecting major parts of the healthy brain! We ran 26 different Abaqus jobs on the Advania HPC cluster – each representing a different montage (electrode configuration). Each job contained 1.8M finite elements. For comparison purposes, on the user’s own server with 16 cores, a single run took about 75min whereas on the UberCloud cluster a single run took about 28min on 24 cores. Thus, we got a significant speedup of about 2x running in the cloud. With this cloud approach, in the future, it will be possible to run many different electrode placement simulations in parallel, thus dramatically speeding up the search for the optimal electrode placement for an individual patient, with the final goal to perform such a search in (almost) real time. In addition, during this cloud experiment, the Abaqus 2017 software container has always been accessible through the user’s browser, from anywhere, on demand, for any kind of interactive and batch work, and for remote visualization of the simulation results. 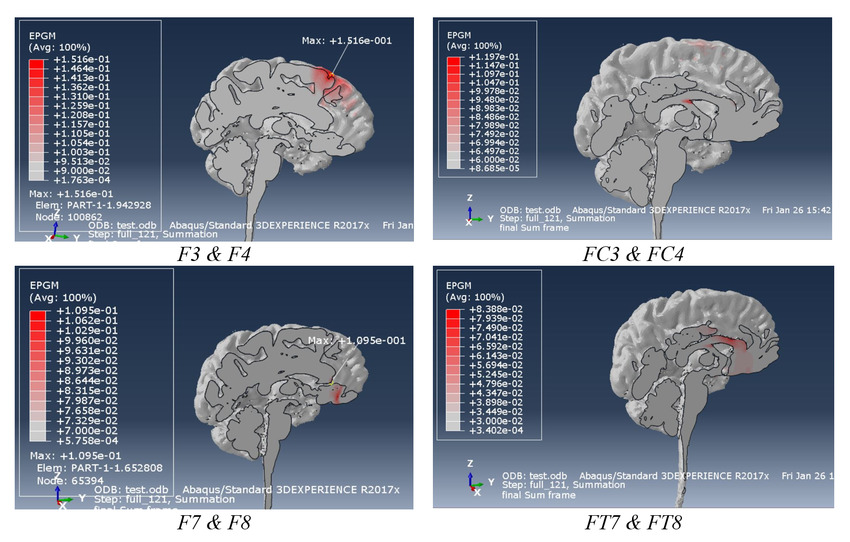 The application discussed here demonstrates a novel method for “Deep Brain Stimulation” in a non-invasive way which has the potential to replace some of the painful/high risk brain surgeries such as in schizophrenia and Parkinson’s disorders. The huge benefits of these simulations are that they (i) predict the current distribution with high resolution; (ii) allow for patient-specific treatment and outcome evaluation; (iii) facilitate parameter sensitivity analyses and montage variations; and (iv) can be used by clinicians in an interactive real-time manner. However, there is still a lot of work to be done in collaboration with the Doctors/Clinicians at NIMHANS and other Neurological Research Centers on how this method can be appraised and fine-tuned for real time clinical use.

Acknowledgements: The author is deeply grateful for the support from Hewlett Packard Enterprise and Intel (the Sponsors), Dassault Systemes SIMULIA (for Abaqus 2017), Advania (providing HPC Cloud resources), Synopsys for Simpleware software, and our UberCloud technical team for containerizing Abaqus and integrating all software and hardware components into one seamless and fully automated cloud solution stack. The UberCloud Case Study 200 has been co-authored by G. Umashankar and Karl D’Souza from Dassault SIMULIA. Big Thank You.