The final stage of the Armenian Olympiad welcomed 42 participants

On October 16, 2014 organizing committee of the Ninth Annual International Microelectronics Olympiad of Armenia announced that the final stage of the Olympiad took place at the Synopsys Armenia Education Department (SAED) during Synopsys Week held October 15-18 in Yerevan. This year the Olympiad involved young participants from 22 countries: Argentina, Armenia, Belarus, China, Egypt, Georgia, Germany, Hong Kong, India, Iran, Jordan, Peru, Philippines, Russia, Serbia, Turkey, UAE, UK, Ukraine, Uruguay, USA and Vietnam. Out the 856 competitors in the Olympiad, 187 were from Armenia (170 from Yerevan, 17 from Gyumri) 20 from Artsakh and 649 were from abroad.

Initiated in 2006 under the patronage of the Prime Minister of Armenia, the Olympiad plays an important role in microelectronics education and stimulates further development of this sphere in Armenia and in the participating countries. It also helps to demonstrate recognition, appreciation and inspire many talented engineers under the age of 30 to increase their interest in microelectronics. The annual event aims to enlarge the international community of young specialists of microelectronics, as well as to evaluate the level of knowledge of participants in order to make necessary adjustments in the regional educational programs.

The competition was conducted in two stages. The first stage, held in 22 countries throughout the year through local committees, involved a written test establishing a baseline understanding of electronic design concepts and techniques. The second stage involved a challenging contest consisting of advanced engineering tasks requiring complex solutions. Of 856 participants in the first stage, 42 were qualified to progress to the second stage held on October 16 in Yerevan at Synopsys' Armenia Education Department (SAED). 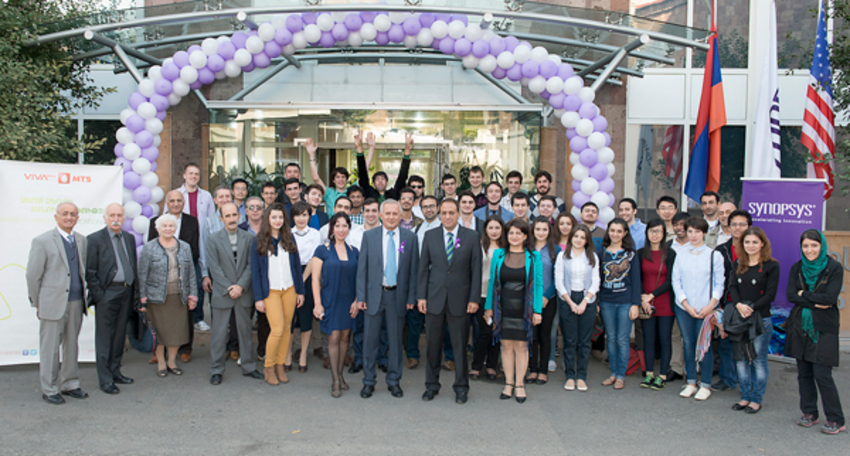 "Such initiatives should always be encouraged as they allow recognizing and appreciating the bests, whose skills and knowledge can greatly contribute to the development of IT sphere that has a strategic importance for Armenia's economy," said Hovik Abrahamyan, the Prime Minister of the Republic of Armenia. "At the same time the Olympiad highlights Armenia on the world IT map as a regional center for microelectronics."

"This Olympiad is a successful example of cooperation among Business-Academia-Government, aimed at stimulating the further development of microelectronics at the level of Armenia and member countries in particular, and at the global level in general. Initiated by Synopsys Armenia and under the auspices of the Prime Minister of Armenia, the Olympiad plays an important role in creating a global community of young specialists involved in microelectronics", said Armen Baldryan, President of the Olympiad Organizing Committee. "Thanks to the sponsorship of our committed partner VivaCell-MTS, the opportunity to travel to Yerevan to participate in the Olympiad is proving to be a very attractive proposal, making the Olympiad a truly unprecedented event in the field of microelectronics throughout the world."

"During the past nine years the Olympiad has served its main objective of stimulating further development of microelectronics in Armenia and the region," said Professor Vazgen Melikyan, president of the program committee of the Olympiad and director of SAED. "Now the Olympiad continues to help supporting the business goals of companies in the semiconductor industry."

This is the third year the event has been held in cooperation with the Institute of Electrical and Electronics Engineers (IEEE) Test Technology Technical Council (TTTC). Synopsys Armenia CJSC is the general organizer and a sponsor of the Olympiad. VivaCell-MTS is the general sponsor of the Olympiad. The Olympiad is also sponsored by Unicomp CJSC, Enterprise Incubator Foundation, Union of Information Technology Enterprises, Microsoft Armenia, Union of Manufacturers and Businessmen of Armenia, Chamber of Commerce and Industry of Yerevan, Yerevan Computer Research and Development Institute, Yerevan Municipality, Ingo Armenia ICJSC, Viasphere Technopark CJSC, Partner Co. Ltd and Elitar Travel Company.

The winners of the Ninth Annual International Microelectronics Olympiad of Armenia were awarded with prizes at the Synopsys Gala Evening held on October 16, 2014 at Aram Khachatryan museum in Yerevan. The prizes are:

About IEEE TTTC
IEEE is the world's largest professional association dedicated to advancing technological innovation and excellence for the benefit of humanity. Sponsored by IEEE's Computer Society, TTTC is a dedicated council to serve the global test technology professional community through a series of annual conferences, standards, publications, educational and professional activities. For more information, please visit http://tab.computer.org/tttc.

About Synopsys, Inc. and Synopsys Armenia CJSC
Synopsys, Inc. accelerates innovation in the global electronics market. As a leader in EDA and semiconductor IP, Synopsys delivers software, IP and services to help engineers address their design, verification, system and manufacturing challenges. Since 1986, engineers around the world have been using Synopsys technology to design and create billions of chips and systems. Synopsys established a presence in Armenia in 2004 as Synopsys Armenia closed joint stock company (CJSC). Synopsys Armenia CJSC provides R&D and product support in EDA, design for manufacturing (DFM) and the development of semiconductor intellectual property (IP). Employing several hundred qualified Armenian engineers, Synopsys is one of the largest IT employers in Armenia. To encourage the highest levels of accomplishment for students in IT, the company sponsors several awards and competitions. Synopsys Armenia's investment in the community reaches well beyond IT. In 2010, Synopsys Armenia was recognized as one of 12 finalists for the U.S. Secretary of State's annual Award for Corporate Excellence (ACE), citing the company's technology and financial leadership as well as its charity work and volunteer activities. Synopsys Armenia CJSC is located in Yerevan. Synopsys, Inc. is headquartered in Mountain View, California, and has approximately 70 offices located throughout North America, Europe, Japan, Asia and India. Visit Synopsys, Inc. and Synopsys Armenia online at www.synopsys.com and www.synopsys.am.