Armenian Olympiad continues to grow in size and geography

“Such initiatives should always be encouraged as they allow recognizing and appreciating the bests, whose skills and knowledge can greatly contribute to the development of IT sphere that has a strategic importance for Armenia’s economy,” said Tigran Sargsyan, the Prime Minister of the Republic of Armenia. “At the same time the Olympiad highlights Armenia on the world IT map as a regional center for microelectronics.”

The competition was conducted in two stages. The first stage, held in 22 countries throughout the year through local committees, involved a written test establishing a baseline understanding of electronic design concepts and techniques. The second stage involved a challenging contest consisting of advanced engineering tasks requiring complex solutions. Of 613 participants in the first stage, 44 were qualified to progress to the second stage held on October 15 in Yerevan at Synopsys’ Armenia Education Department (SAED).

This is the second year the event has been held in cooperation with the Institute of Electrical and Electronics Engineers (IEEE) Test Technology Technical Council (TTTC). Synopsys Armenia CJSC is the general organizer and a sponsor of the Olympiad. VivaCell-MTS is the general sponsor of the Olympiad. The Olympiad is also sponsored by Arminco CJSC, Elitar Travel Company, Enterprise Incubator Foundation, INGO ARMENIA ICJSC, Microsoft Armenia, Partner Co. Ltd, Unicomp CJSC, Union of Information Technology Enterprises, Union of Manufacturers and Businessmen of Armenia, Viasphere Technopark. The information sponsors are ARKA Agency, Business Express Weekly, ECOnomika Magazine, Public Radio of Armenia, Yerkir Media TV and 168 Hours Daily.

“It’s a great honor for me to welcome the best and the brightest young engineers from 22 countries. The growth of the Annual International Microelectronics Olympiad of Armenia demonstrates the attractiveness of Armenia to technology players around the world. The event is unprecedented in this field and it serves as a strong basis for developing technological relationships for Armenia around the world,” said Rich Goldman, president of the organizing committee of the Olympiad, CEO of Synopsys Armenia CSJC, and vice president of corporate marketing and strategic alliances at Synopsys.

“The quality of education in Armenia will define our future as it is a necessary precondition to achieving competitive advantage,” said Ralph Yirikian, general manager of VivaCell-MTS, the general sponsor of the Olympiad. “The field of microelectronics has a great potential for creating a new value chain in the country with sustainable source of income for the youth of Armenia and the country at large. As Armenia’s leading telecommunications operator and a corporate citizen, VivaCell-MTS recognizes the importance of supporting ambitious initiatives that lead young people to great discoveries and encourage creativity.”

“During the past eight years the Olympiad has served its main objective of stimulating further development of microelectronics in Armenia and the region,” said Professor Vazgen Melikyan, president of the program committee of the Olympiad and director of SAED. “Now the Olympiad might be aimed at supporting the business goals of companies in the semiconductor industry.”

The winners of the Eighth Annual International Microelectronics Olympiad of Armenia were awarded with prizes at the Synopsys Gala Evening held on October 16, 2013 at the Komitas Chamber Music Hall in Yerevan. The winners are:

All foreign participants were granted with free travel insurance from INGO ARMENIA ICJSC.

“I participated in the 7th Microelectronics Olympiad, placing second in China, but missed the chance to visit Armenia. I was determined to win this year, and I did. It’s my pleasure to visit Armenia and to compete in the final stage of the Eighth Annual International Microelectronics Olympiad of Armenia. I am honored to be among 44 finalists because I believe that it shows the high quality of microelectronics education in my university,” said Shiguang Meng, PhD candidate from University of Chinese Academy of Science in Beijing, China. “This also gave me an opportunity to spend three full days in Armenia, learn more about Yerevan and gain new friends from around the world.” 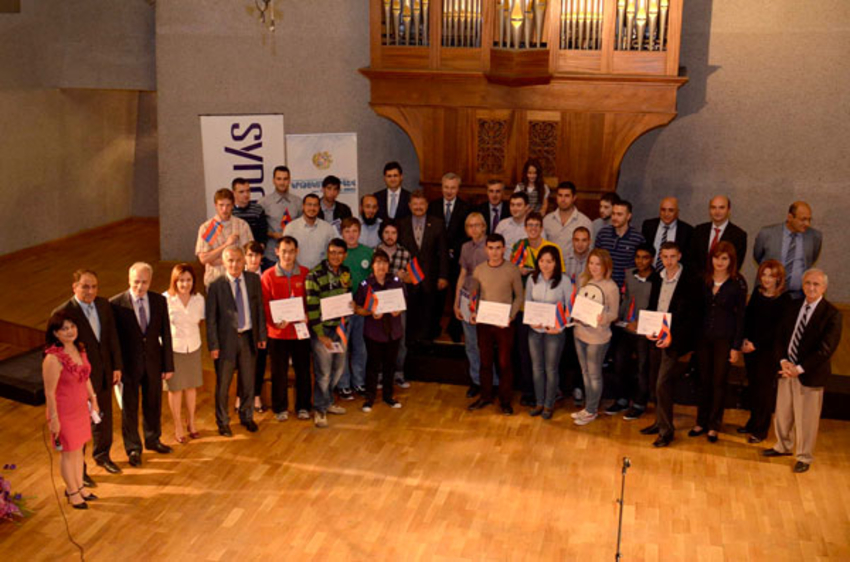 About IEEE TTTC
IEEE is the world’s largest professional association dedicated to advancing technological innovation and excellence for the benefit of humanity. Sponsored by IEEE’s Computer Society, TTTC is a dedicated council to serve the global test technology professional community through a series of annual conferences, standards, publications, educational and professional activities. For more information, please visit http://tab.computer.org/tttc.

About Synopsys, Inc. and Synopsys Armenia CJSC
Synopsys, Inc. accelerates innovation in the global electronics market. As a leader in electronic design automation (EDA) and semiconductor IC, its software, IP and services help engineers address their design, verification, system and manufacturing challenges. Since 1986, engineers around the world have been using Synopsys technology to design and create billions of chips and systems. Synopsys established a presence in Armenia in 2004 as Synopsys Armenia closed joint stock company (CJSC). Synopsys Armenia CJSC provides R&D and product support in EDA, design for manufacturing (DFM) and the development of semiconductor intellectual property (IP). Employing several hundred qualified Armenian engineers, Synopsys is one of largest IT employers in Armenia. To encourage the highest levels of accomplishment for students in IT, the company sponsors several awards and competitions Synopsys Armenia’s investment in the community reaches well beyond IT. In 2010, Synopsys in Armenia was recognized as one of 12 finalists for the U.S. Secretary of State’s annual Award for Corporate Excellence (ACE), citing the company’s technology and financial leadership as well as its charity work and volunteer activities. Synopsys Armenia CJSC is located in Yerevan. Synopsys, Inc. is headquartered in Mountain View, California, and has approximately 70 offices located throughout North America, Europe, Japan, Asia and India. Visit Synopsys, Inc. and Synopsys Armenia online at www.synopsys.com and www.synopsys.am.