Synopsys currently has two Software Development Platforms available, AXS101 and AXS103, and each consists of a mainboard with a CPU card:


Both come with an associated software package of pre-built operating systems, drivers and application examples. Readily licensable Synopsys IP has been used to build the peripherals on the mainboard, giving the system a rich set of I/O that can also be implemented in an SoC. Additional expansion interfaces, such as five Digilent Pmod™ Compatible connectors, support the integration of other custom and commercially available hardware add-ons.

The mainboard also features a USB data port combined with a converter, which provide a JTAG debug interface and a debug console via a single USB cable. Additionally, industry-standard debug probes from Ashling, Digilent and Lauterbach are also supported. Separate UART interfaces for a debug console are available as well. 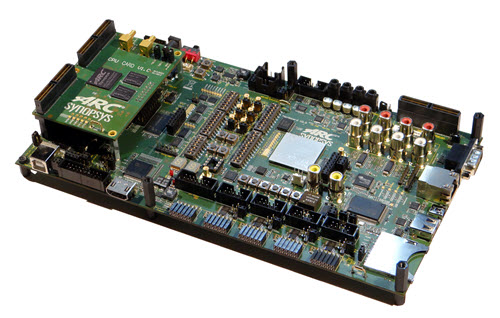 The mainboard includes a battery-backed real-time clock and a clock generator for the primary clock from which all other clocks are derived internally. Additionally, 16 LEDs, six push buttons and one 9-bit DIP switch are available for user applications.

The ARC AXS101 Software Development Platform, which includes the AXC001 CPU Card hardware, has an ARC Processor IC with a total of four ARC CPUs that allow processor operation at the following target speeds:


One of the cores of the AS221BD can boot individually as an ARC 625D. The ARC EM6 can be used as an ARC EM4 by disabling the caches.


The ARC AXC003 CPU card contains 256 kByte of on-chip SRAM and features 1 GByte of DDR3-SDRAM. The software delivered as part of the ARC AXC003 CPU Card includes pre-built SMP Linux image (plus the U-boot bootloader) and the MQX RTOS in binary format. Bare metal and MQX RTOS device driver source code for a subset of the peripherals and example applications. Code development is made easy using the MetaWare Development Toolkit, MetaWare Lite tools or the ARC GNU Tool Chain.