During the commencement ceremony, Rich Goldman, CEO of Synopsys Armenia, vice president of Corporate Marketing and Strategic Alliances for Synopsys, recognized the achievement of the graduates and conferred Synopsys Certificates of Achievement upon each one. Ara Avetisyan, Armenian National Academy of Science associate member and SEUA rector, Aram Simonyan, Armenian National Academy of Science associate member and YSU rector, and Andranik Avetisyan, ERA rector conferred diplomas for their universities. Additionally, eight graduates from Russian-Armenian (Slavonic) University (RAU) were awarded Synopsys Certificates of Recognition for their proficiency with Synopsys software tools.

Under the umbrella of the Synopsys University Program, SAED provides students with all the necessary components of a world-class education: competitive curricula based on a proven model of cooperation between industry and academia; access to Synopsys’ state-of-the-art electronic design automation software and educational design kits; highly qualified and experienced faculty; and a modern technical infrastructure and environment. Additional amenities to encourage learning include a comprehensive technical library with engineering-related publications and a modern cafeteria. During their studies, students are also actively involved in corporate social responsibility (CSR) projects implemented by the company, such as the tree planting held during the annual Synopsys Week in Armenia.

This year, 80 percent of the graduates had an opportunity to combine their studies with part-time paid internships at SAED and worked on real industrial projects. The top-performing interns were eventually hired by Synopsys based on the experience they gained. Many other graduates have also been hired by Synopsys, having worked hard to create a strong educational foundation for their careers.

“The strength of Synopsys’ university program is a vital part of the company’s success in Armenia,” said Rich Goldman. “The influence of this program reaches far beyond Armenia, bringing the benefit of the technical expertise developed here to places such as Russia and Jordan. Due to this innovative program, a primary example of industry and university cooperation, the graduates are uniquely qualified and are productive on the job from their very first day. The leadership these graduates can provide will contribute to the development of high tech in Armenia.”

“I heartily congratulate the graduates of the Synopsys and SEUA Polytechnic program as they enter the world of information technology today,” said Mr. Avetisyan. “I also want to express my gratitude to Synopsys Armenia for its cooperation with Polytechnic and for equipping our graduates with advanced knowledge and skills in engineering. The experience gained in this program has prepared the students to build Armenia into a leading electronic design automation center.”

“The professional qualifications of the program’s graduates increase year after year, and the steady growth in the number of graduates hired by Synopsys Armenia is further proof of that,” said Vazgen Melikyan, honorable scientist of RA, director of the SAED and head of SEUA’s Microelectronic Circuits and Systems Interfaculty Chair and ERA’s Microelectronic Circuits and Systems of Communication Facilities Chair. “I foresee a bright future in high tech for this year’s graduates.”

In her valedictory speech today, Nazeli Melikyan, a 2012 master’s degree program graduate and a current employee of Synopsys Armenia said, “We are grateful to all the people whose efforts and knowledge made it possible for us to receive a world-class education here in Armenia. The experience of working with Synopsys’ state-of-the-art EDA tools on real industrial projects in a modern environment will be invaluable to our professional engineering careers.” 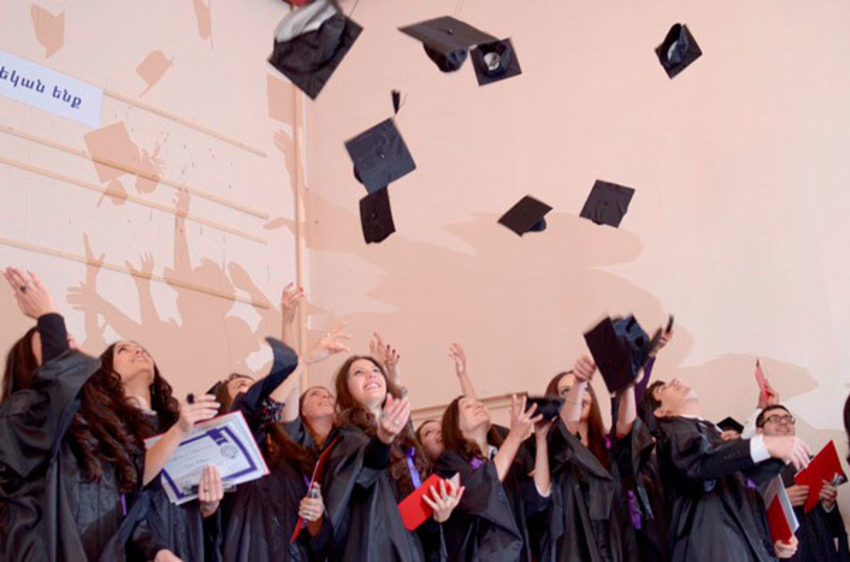 About Synopsys Armenia CJSC University Program
Synopsys Armenia CJSC has been investing in local IT education since 2004 to help provide Armenia with highly qualified IT specialists. Through the Synopsys Armenia Education Department (SAED), Synopsys Armenia provides technology, tools and resources for teaching and academic research. Under the umbrella of the Synopsys University Program, SAED has developed a competitive curricula based on a proven model of cooperation between industry and academia. This model enables SAED to provide industry-ready graduates who have the knowledge and skills to quickly become productive in the workforce. Synopsys Armenia is engaged in successful cooperation programs with major Armenian universities such as State Engineering University of Armenia (SEUA), Yerevan State University (YSU), Russian-Armenian (Slavonic) University (RAU), European Regional Academy (ERA), American University of Armenia (AUA), and the National Research University of Electronic Technology (MIET). SAED cooperates with several universities in Russia, China, India, Saudi Arabia, UAE, Jordan and other countries in the region.

About the Industry-University Educational Model
In the first years of the Bachelor’s degree program, students obtain a basic education in mathematics, physics and other scientific disciplines at their chosen university. The top-performing students are then selected by Synopsys technical experts and professors for enrollment in the SAED program. Further education in the Bachelor’s program, Master’s program and Ph.D. studies is obtained through a customized SAED curriculum for VLSI design and EDA. Studies are conducted in specially equipped classrooms provided by Synopsys where SAED students have access to the latest EDA software tools in use in industry. Teaching, supervision of course projects, Master’s theses and Ph.D. dissertations resemble actual design projects at Synopsys Armenia. Projects are completed in conjunction with leading professionals from Synopsys and professors from the corresponding university. Upon successful completion of the SAED program, graduates are industry-ready specialists and qualified to work for Synopsys Armenia as well as other high-tech companies. This source of engineers is proving to be an important factor in the development of an EDA industrial cluster in Armenia.

About Synopsys, Inc. and Synopsys Armenia CJSC
Synopsys, Inc. accelerates innovation in the global electronics market. As a leader in electronic design automation (EDA) and semiconductor IC, its software, IP and services help engineers address their design, verification, system and manufacturing challenges. Since 1986, engineers around the world have been using Synopsys technology to design and create billions of chips and systems. Synopsys established a presence in Armenia in 2004 as Synopsys Armenia closed joint stock company (CJSC). Synopsys Armenia CJSC provides R&D and product support in EDA, design for manufacturing (DFM) and the development of semiconductor intellectual property (IP). Employing several hundred qualified Armenian engineers, Synopsys is one of largest IT employers in Armenia. To encourage the highest levels of accomplishment for students in IT, the company sponsors several awards and competitions Synopsys Armenia’s investment in the community reaches well beyond IT. In 2010, Synopsys in Armenia was recognized as one of 12 finalists for the U.S. Secretary of State’s annual Award for Corporate Excellence (ACE), citing the company’s technology and financial leadership as well as its charity work and volunteer activities. Synopsys Armenia CJSC is located in Yerevan. Synopsys, Inc. is headquartered in Mountain View, California, and has approximately 70 offices located throughout North America, Europe, Japan, Asia and India. Visit Synopsys, Inc. and Synopsys Armenia online at www.synopsys.com and www.synopsys.am.