On February 1, at 14:00, a meeting with Seyran Ohanyan, Minister of Defence of the Republic of Armenia and members of the Winners’ Club of Presidential Educational Award, as well as students specializing at microelectronic circuits at State Engineering University of Armenia (SEUA) took place at Synopsys Armenia R&D Center.

SEUA Rector Ara Avetisyan, General Manager of VivaCell-MTS Ralph Yirikian, Head of the Department of Analytical Research at the Office to the President of the Republic of Armenia Arkadi Khachatryan, Chairman of the State Committee of Science Samvel Harutyunyan, Director of Unicomp Armen Baldryan and other honorary guests have attended the meeting.

The Chairman of the Presidential Educational Award Committee Hovik Musayelyan opened the meeting by briefly presenting Seyran Ohanyan’s glorious military path, “Our country’s future scientific and economic elite is discovered through this Award. For them meeting such a distinguished public official and a patriotic individual, fully devoted to his nation, as Seyran Ohanyan has a special meaning, because his path, his approaches and his vision of the future are very important for nurturing a patriotic spirit and developing a sense of individuality in our youth.”

“We do serious work to develop the military industry; the of modern IT technologies in military sphere, implementation of new solutions and new programs are extremely important for conducting clever defensive operations. We need to strengthen that connection, perhaps this meeting will serve as a base for us to think together how to achieve big things using small tools,” said Seyran Ohanyan addressing Winners’ Club members and top students in the IT sphere.

As always, the meeting was followed by a Q&A session. Traditionally, the speaker was presented with the Honorary Member Award and the Winners’ Club member emblem.

For more than two years the Winners’ Club hosts regular meetings with distinguished individuals not only in the IT sphere but also in all spheres of social, economic, and political life. This is the 15th meeting in what became the traditional series of events.

“Of course, knowledge and multi-disciplinary insight are necessary preconditions to success, but to guide them and to use them effectively we need to exchange experience, to be inspired and to believe that we will succeed. These meetings are very important for us because we get a unique chance to communicate with exceptional individuals, successful entrepreneurs and distinguished public officials,” said Ani Harutyunyan, the president of the Winners club. 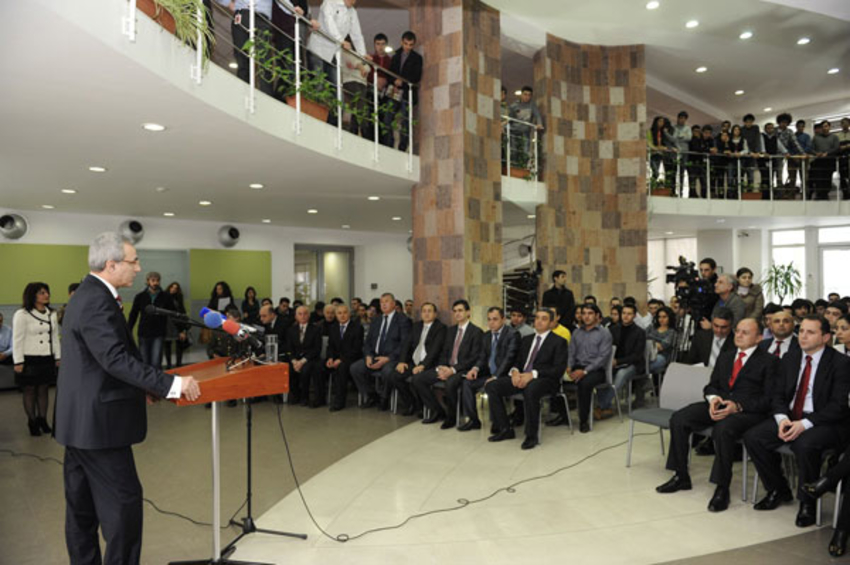 About Winners’ Club
The Presidential Educational Award Winners’ Club was founded with support of Synopsys Armenia CJSC on October 1, 2008 upon approval of the President of the Republic of Armenia Serzh Sargsyan. The mission of the Club is to serve as a unique pool of Armenia’s future scientific and economic elite and to provide a productive venue for Winners’ contribution to the development of the IT sphere in Armenia. The Club, currently comprised of more than 150 members, is a growing network of the winners of Annual Educational Award of President of RA and International/ Republic Olympiads in the IT sphere. The Winners’ Club hosts regular meetings with distinguished individuals not only in the IT sphere but also in all spheres of social, economic, and political life. The meetings are designed in a master-class format, with guest speakers sharing their insight and success stories in different subject areas, followed by Q&A session. As the main organizer of the Presidential Educational Award and the key initiator of Winners’ Club, Synopsys Armenia is assisting with the organization of the above mentioned meetings.