Collaborating to Enable Design with the Latest Processors and FinFET Processes, including 7nm 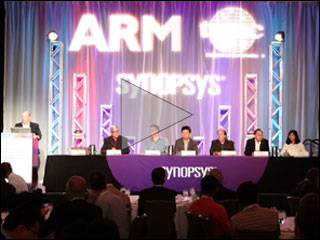 TSMC, ARM and Synopsys discuss their collaboration to enable design with the latest processors (including ARM® Cortex®-A73) and process technology, including 7nm. In addition, HiSilicon shares their experience using IC Compiler II, Design Compiler Graphical with a next generation ARM processor in TSMC’s 16 and 7-nm FinFET process technology.

Phil Dworsky
Synopsys
Phil Dworsky has been with Synopsys since 1993 and is currently director, services marketing and strategic alliances as well as publisher of Synopsys Press. Phil was a co-founder and principal engineer at Performance Processors, a parallel processing company, and was also a co-founder of Silicon Solutions/Zycad, an early provider of simulation acceleration technology. He started his career at Hewlett-Packard as a hardware and software designer. Phil holds a Bachelor of Science degree with high honors in electrical engineering and computer science (EECS) from Princeton University.

ARM
Ron Preston is Senior Principal Engineer for ARM’s Physical Design Group, where he is focused on custom memories and libraries at 7nm and beyond. Prior to joining ARM, Ron was lead technologist for the Atom product group at Intel, responsible for process/product co-definition for the 32nm through 10nm technology generations. Ron is a Senior Member of the IEEE and a past program committee member and workshop chair at ISSCC. He holds BSEE and MSEE degrees from Rensselaer Polytechnic Institute.

ARM
Ron is VP marketing for the Physical Design Group, where he is responsible for the product management and marketing of implementation solutions for ARM. With more than 20 years in electronics and computer aided design, Ron previously held senior positions in EDA and Mil-aero companies in engineering operations, strategic planning and embedded SW development

TSMC
Willy Chen is the deputy director of design methodology and service marketing at TSMC. He has more than 20 years of experience in technical/product marketing, strategic planning and business development in the electronic design software and foundry industry. Mr. Chen has a Masters degree of electrical and computer engineering from UC Santa Barbara.

Chris Schreppel
Synopsys
Chris Schreppel is a staff design consultant for Synopsys Professional Services. He's honed his implementation skills over a career spanning more than 25 years as a designer, consultant and project manager. In addition to contributing to the Reference Implementation for the ARM Cortex-A73 that we'll hear about in this session, he's been involved in numerous ARM and other processor implementations in advanced process technologies, including multiple customer Cortex-A73 implementations.

Zeng Qiuling
HiSilicon
Zeng Qiuling has been working at HiSilicon since 2009, starting as a Physical Design Engineer. Now, she's focused on performance power and area analysis and design methodology.

Synopsys
Henry Shang is Sr. Director of R&D for Physical Implementation at Synopsys and is responsible for silicon enablement technologies including Routing, Extraction, Timing, Signal Integrity and Electromigration. Henry holds a Ph.D. degree in Electrical Engineering and Computer Science from the University of California, Berkeley.

TSMC Recognizes Synopsys with Four "Partner of the Year" Awards

Collaborating to Enable Design with the ARM Cortex-A73 processor and latest TSMC FinFET Processes, including 7nm