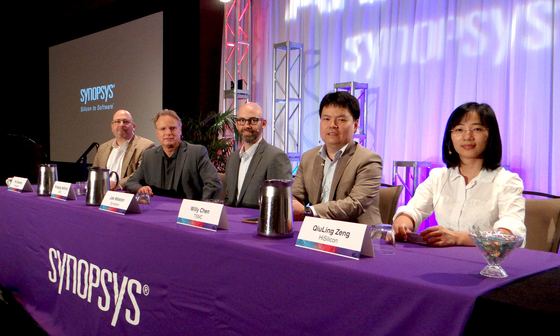 Arm, Synopsys and TSMC kicked off DAC 2017 with an event to share the results of their collaboration to enable design on TSMC 16-nm and 7-nm process technology with the new Arm® Cortex®-A75 and Cortex-A55 processors and the Synopsys Design Platform. In this event video, they introduce the new Synopsys QuickStart Implementation Kits (QIKs) for the Arm cores that take advantage of Arm POP™ technology and Synopsys tools, and the

Arm
Wolfgang has more than 20-years’ experience in the semiconductor, EDA and IP industries. He is currently working as Platform Marketing Director in Arm’s Physical Design Group and responsible for Advanced FinFET Platforms.

TSMC
Willy Chen is the deputy director of design methodology and service marketing at TSMC. He has more than 20 years of experience in technical/product marketing, strategic planning and business development in the electronic design software and foundry industry. Mr. Chen has a Masters degree of electrical and computer engineering from UC Santa Barbara.

HiSilicon
Qiuling has been working at HiSilicon since 2009, starting as a Physical Design Engineer. Now, she's focused on performance power and area analysis and design methodology.

Synopsys
A nearly 20-year veteran of the EDA industry, Joe Walston started his career at Avant! where he worked in verification and simulation before joining Magma Design Automation in its start-up phase.  At Magma, Joe spearheaded technical sales and support on the east coast and specialized in high-speed implementation in both the product and support channels.  After joining Synopsys through the Magma acquisition, Joe has continued to drive for the highest performance and fastest turnaround for high-performance cores through product and flow development, and by working with leading-edge designers to achieve their aggressive performance targets. Joe holds a doctorate in Physics from North Carolina State University.

Synopsys
Phil Dworsky has been with Synopsys since 1993 and is currently director, services marketing and strategic alliances as well as publisher of Synopsys Press. Phil was a co-founder and principal engineer at Performance Processors, a parallel processing company, and was also a co-founder of Silicon Solutions/Zycad, an early provider of simulation acceleration technology. He started his career at Hewlett-Packard as a hardware and software designer. Phil holds a Bachelor of Science degree with high honors in electrical engineering and computer science (EECS) from Princeton University.