What’s Important for IoT - Power, Performance or Integration... or All of the Above? 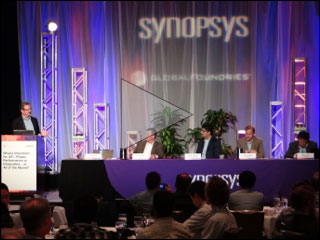 On June 7, 2016, Synopsys and GLOBALFOUNDRIES hosted a panel dinner event at DAC. At this event, attendees heard industry experts share their perspectives on IoT and discuss the impact of technology choices in making tradeoffs on key challenges of IoT designs.

Ed Sperling (Moderator)
Editor in Chief, Semiconductor Engineering
Ed Sperling is the editor in chief of Semiconductor Engineering. He is a technology industry veteran and frequent moderator and speaker based in Silicon Valley. Sperling is a former contributing editor at Forbes, the former editor in chief of Electronic News and Electronic Business, and he has held top editorial positions at Ziff-Davis and CMP Publications.

Prior to joining GLOBALFOUNDRIES, Rajeev was Sr. Director, Product Management and Marketing at Qualcomm Life Inc. Previously, he was co-founder and CTO of 2net™, a digital health start-up, which has become the multi-million dollar Qualcomm healthcare company. He holds more than 40 patents and is a co-author of the book Wireless Health: Remaking of Medicine by Pervasive Technologies.

Director of Product Development, IoT Solutions Group, AT&T
Steve Hardin has over 25 years of experience in the wireless industry and presently leads the AT&T team which interfaces with connected device and module vendors for "Network Ready" certification on the AT&T wireless network. Steve also develops network capabilities for AT&T, supporting the emerging devices organization. Previously, Steve was a Director in the Chief Technology Officer's organization of AT&T and Cingular Wireless where he oversaw network projects such as Visual Voicemail, 411 DA, Push-To-Talk, Femtocell, Location Based Services, E-911, CALEA, and Mobile Convergence solutions. Prior to the formation of Cingular Wireless Steve managed the wireless device certification team for BellSouth Cellular Corporation.

CEO, VeriSilicon
Dr. Wayne Wei-Ming Dai is the founder, President, and CEO of VeriSilicon. Prior to VeriSilicon, Dr. Dai was the Co-Chairman and Chief Technology Officer of Celestry Technologies, Inc. Prior to that, he was the founder and CEO of Ultima Interconnect Technology, Inc., one of the predecessor companies to Celestry.

Dr. Dai was the founding Chairman of the IEEE Multi-Chip Module Conference and the founding Chairman of IEEE Symposium on IC/Package Design Integration. He has published over 100 papers in technical journals and conferences and received the NSF Presidential Young Investigator Award from the President of United States in 1990. He was elected as one the top ten venture-backed entrepreneurs in China in 2005, and elected as one of the 2005 top ten talents of science and technology in China. In 2007, he was recognized as The Ernst & Young Entrepreneur of the Year in China. In 2013, he was honored as The Executive of the Year of 2013 ACE Award. In 2014, he was awarded "Hurun Industry Achievement Award 2014".

VP of Solutions Group, Synopsys
John Koeter joined Synopsys in 1998 and is currently Vice President of Marketing for the Solutions Group. In that capacity, he is responsible for the marketing of Synopsys' DesignWare® IP, prototyping and FPGA design products. Before coming to Synopsys, Mr. Koeter held marketing, engineering, and corporate application engineering positions with Texas Instruments and Advanced Micro Devices. Mr. Koeter holds a BSEE degree from Cornell University.