« Previous: Understanding the Apple ‘goto…
Next: OpenSSL: Fix or rewrite? »

The GnuTLS certificate verification bug allows attackers to intercept SSL traffic. Learn how the vulnerability works and how to mitigate it.

Recently, Apple released a patch for a bug in its SSL handshake implementation on iOS and Mac OS X that allowed attackers to intercept SSL traffic originating from vulnerable devices. It turns out that the GnuTLS library also contained a bug that was patched on February 27, 2014. This bug also allows attackers to intercept SSL traffic. Let’s take a look at the GnuTLS issue.

If the above checks succeed, then the certificate is considered valid. Note that other verification steps like common name verification are performed elsewhere.

Now, the actual bug is in how check_if_ca handles this return value: 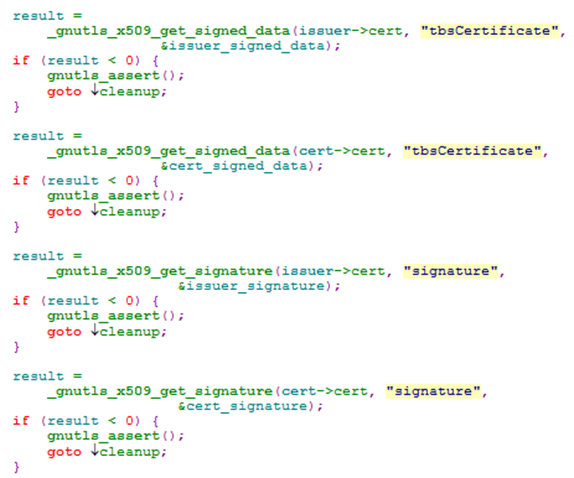 If a negative value is received, further checks (including signature verification on the certificate) are bypassed, and the goto cleanup call is executed. Here’s what the cleanup code looks like:

Note that the negative result will be returned to the caller. The caller (_gnutls_verify_certificate2) contains:

The caller assumes that a return value of zero indicates an error and that nonzero return values mean that everything is OK.

Would certificate/key pinning solve this?

I’m not familiar with GnuTLS’ support for certificate/key pinning; I have not experimented with the options listed at http://www.gnutls.org/manual/html_node/Certificate-verification.html. So I cannot comment on that.

Anybody using software that uses GnuTLS is affected. Typically, this will be Linux applications. Both the client side and the server side for SSL connections are affected. However, the server-side vulnerability only matters if its clients are being authenticated using certificates.

What can you do?

End users using Linux should update GnuTLS to version 3.2.12. This will not help with applications that are statically linked against an older version of GnuTLS. You will need to update those separately.