« Previous: How to cyber security:…
Next: AppSec Decoded: What is driving… »

Analysis of an attack on automotive keyless entry systems

The convenience of keyless entry systems can come at a price: your security. Learn how key fob hacks happen and why proactive security measures are a vital part of stopping them.

With increased connectivity capabilities and larger and more complex software in automotive systems, modern vehicles are becoming more susceptible to cyber security attacks. Over the years, security researchers identified a number of vulnerabilities in automotive systems that have raised awareness about the need for automotive cyber security. One example that was made public in November 2020 was a set of vulnerabilities in the Tesla Model X keyless entry system discovered by Lennert Wouters at the University of Leuven in Belgium.

The steps of the Tesla Model X keyless entry system hack are illustrated in Figure 1. The numbers in the figure indicate the individual steps. Please note that the target vehicle is locked and the target key fob is away from the vehicle. 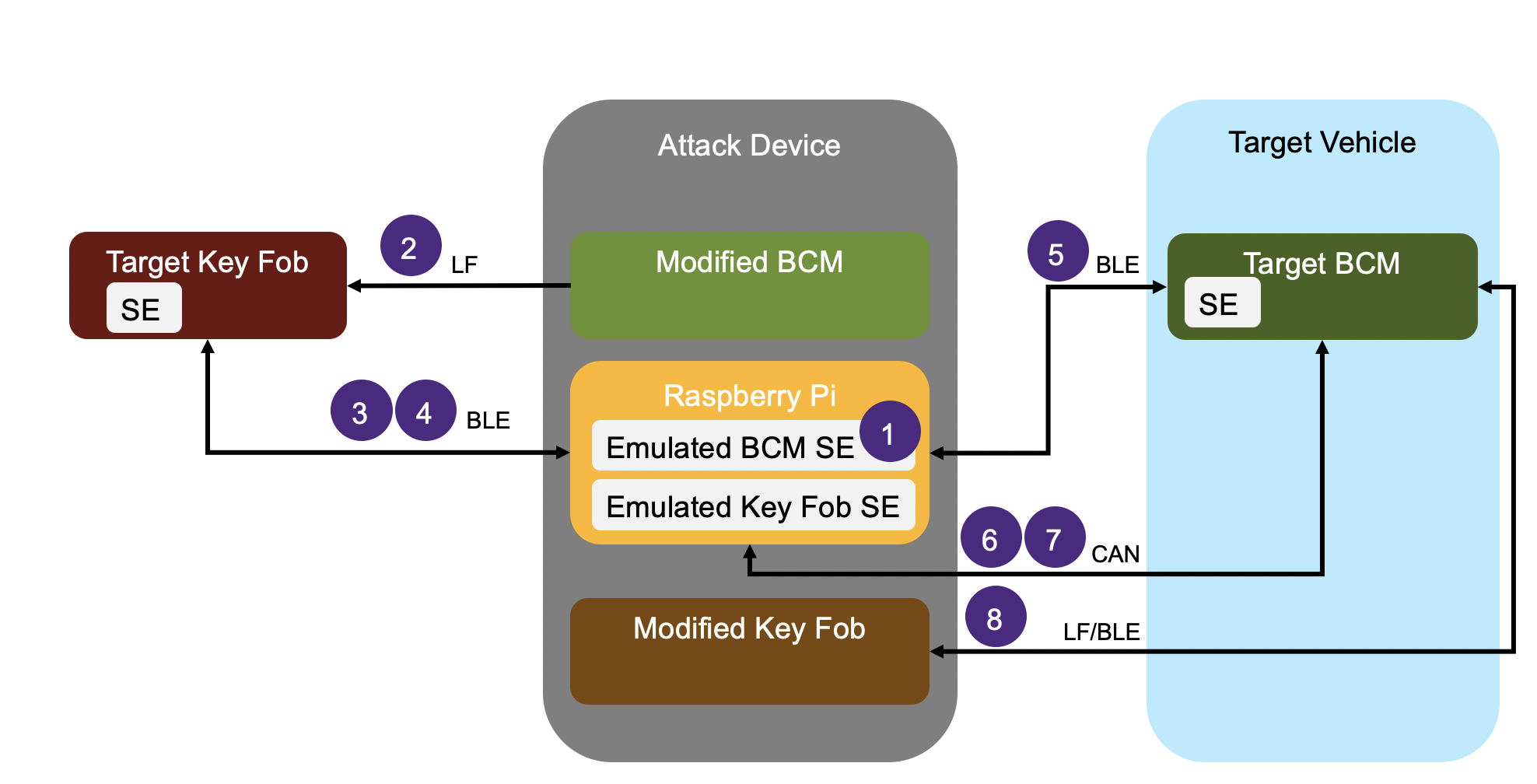 The attacker uses a preprepared attack device consisting of a modified body control module (BCM), a modified key fob, and a Raspberry Pi. Modifications include replacing the Secure Element (SE) chip with Python scripts running on the Raspberry Pi that emulate the SE.

Vulnerabilities/weaknesses that lead to the key fob hack

There are two main vulnerabilities/weaknesses that allow this attack. These issues are summarized in Table 1.

Although signature verification is implemented on the key fob, a vulnerability allows the attacker to update the key fob over BLE with malicious firmware. Moreover, although valid key fobs typically store signed certificates received from the back end and acquired during provision, these certificates are not verified by the vehicle BCM while pairing with the key fob.

It’s important to note that the issues were responsibly disclosed to Tesla in August 2020 by security researchers, and Tesla released an over-the-air (OTA) patch to address them in November 2020.

Since there is limited information publicly available, please note also that some assumptions have been made about the target systems and type of weaknesses/vulnerabilities in order to facilitate this discussion on security solutions.

There are already multiple ongoing activities in the automotive industry to help improve cyber security, such as the development of a new cyber security engineering standard called ISO SAE 214342 and regulations such as UN regulation 155 cyber security. There are several potential approaches for discovering and addressing the type of issues just described. Our focus here is not on describing a specific technical security solution to address a particular vulnerability, but rather on providing a broader discussion to emphasize the approaches and security activities that automotive organizations should engage in to help improve security and reduce the risks of vulnerabilities and weaknesses in the final product before release.

The first issue is the improper signature verification in the implementation on the key fob. These types of implementation issues can often be found using static code analysis, software composition analysis (to identify known vulnerabilities), and fuzz testing (to detect unknown vulnerabilities). Additionally, it may be possible to detect these types of issues during penetration testing, focusing on high-risk areas such as security-related functions and firmware updates.

The second issue is a missing certificate verification in the design of the pairing protocol between the BCM and the key fob. These type of design issues can often be identified through security design reviews. Moreover, it’s imperative to perform a proper threat analysis and risk assessment of the target system to identify high-risk areas, which helps define appropriate security requirements and assists in designing suitable security controls. Additionally, it may be possible to detect these types of issues during penetration testing, focusing on high-risk areas such as security-related functions and pairing functions.

The importance of proactive patch management

Developing 100% secure automotive systems is not realistic, so automotive organizations need to consider and deploy appropriate measures for enabling OTA updates to allow for timely patches of newly detected vulnerabilities. Moreover, this example also highlights the need for automotive organizations to establish internal processes and workflows to monitor, gather, and process vulnerability information, such as what is provided by security researchers, in order to respond accordingly.

Dr. Dennis Kengo Oka is an automotive cybersecurity expert with more than 15 years of global experience in the automotive industry. He received his Ph.D. in automotive security focusing on solutions for the connected car from Chalmers University of Technology in Sweden. As a Principal Automotive Security Strategist at Synopsys, he focuses on security solutions for the automotive software development lifecycle and supply chain. Dennis has over 70 publications consisting of conference papers, journal articles and books, and is a frequent public speaker at international automotive and cybersecurity conferences and events.