« Previous: At RSA, it is clear encryption…
Next: The days (and nights) of an… »

The DevOps / security relationship is often tense—but does it have to be? At RSA 2019, Tanya Janca explained how teams can play nice, and why they ought to.

If you really want to make the “Sec” part of DevSecOps work effectively, those “soft” interpersonal skills are just as important as tech skills, Tanya Janca told an audience at RSA Conference on Wednesday.

She has also been a guest on the Silver Bullet Security Podcast and featured in the past on this blog.

And in her presentation, titled Security Learns to Sprint: DevSecOps, she said a major reason that security isn’t part of the software development life cycle (SDLC) from start to finish is that development and security teams tend to view each other not just with suspicion, but sometimes with outright hostility.

The tension between DevOps and security

One of her first slides, illustrating how “some security people see DevOps,” showed a scowling member of a security team shoveling away the, uh, excrement of a DevOps unicorn.

Her vision, by contrast, was filled with puffy clouds and rainbows, with a smiling security team member giving the DevOps unicorn an apple and putting new horseshoes on it.

That, she said, symbolized a necessary component of reaching what ought to be a shared goal: “Change the way we make software so that the easiest way to do something is also the most secure way.”

How to improve the DevOps and security relationship

But even with those obstacles, she said, it is important to remember that if DevOps loses, that doesn’t mean security wins. “Security doesn’t win if the business doesn’t also win,” she said.

And given that the pace of DevOps is frequently a sprint, “we have to sprint along with them. We can’t be a bottleneck,” she said. “They can’t wait for us. And we have to make processes that actually work.”

One way to do that, she said, is to break security into smaller pieces. “If you test for just one bug class, it will tear through that code so much faster, and you can eliminate a bug class.”

She also recommended tuning static analysis (SAST) and dynamic analysis (DAST) tools and reusing code that is known to be good.

And she said she has created a parallel security pipeline for more in-depth testing. While it’s more time-consuming, it doesn’t interrupt developers. “Then you have annoyed no one,” she said.

Build security in throughout the SDLC

And, as the Synopsys Software Integrity Group has been saying for a long time, the way to make applications secure is to “build security in” during the entire SDLC—to “make it possible for Dev and Ops to perform security as part of their daily work,” she said.

Not only does it make security testing faster—it makes it vastly cheaper. She cited estimates from Ponemon Institute research that found the cost of fixing a quality or security defect during coding costs about $80. It rises to $240 during the build, $960 during the QA and security phase, and a staggering $7,600 during production.

So, for the security team, that means “pushing left,” or providing feedback earlier and more often.

Invite Dev and Ops to participate in security 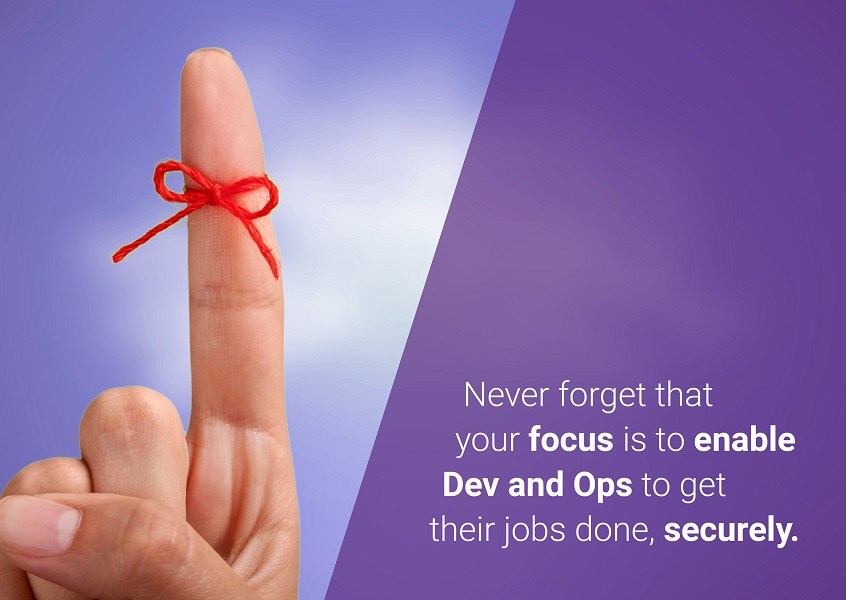 That doesn’t mean relaxing standards to keep things moving. Janca said, multiple times, that security teams should “insist that the build breaks if a large security vulnerability is found. Security is part of quality,” she said.

But, she added, issues like that will be less likely if Dev and Ops are invited to participate in security activities—activities like threat modeling, incident simulations, and security sprints. She even recommended that the security side offer security training to Dev and Ops—and pay for it.

“We want to make sure they know what to do for things like that,” she said. “We need them. We can’t work in isolation.”

“Never forget that your focus is to enable Dev and Ops to get their jobs done, securely,” she said.