« Previous: AppSec Decoded: The consequences…
Next: Configure security tools for… »

Fuzzing Bitcoin with the Defensics SDK, part 1: Create your network

This is the first part of a two-part advanced technical tutorial that describes how you can use the Defensics SDK to set up your own Bitcoin network.

This is the first of two articles that describe how to use the Defensics® software development kit (SDK) to fuzz Bitcoin software. Specifically, you’ll learn how to model one of the Bitcoin network protocol messages and use the Defensics SDK to perform fuzzing on the bitcoind process.

This is an advanced technical tutorial, so you’ll need some background knowledge.

What is the Defensics SDK?

Defensics is a generational fuzz testing platform with over 250 test suites for a wide variety of network protocols and file formats.

The Defensics SDK gives you the ability to create your own test suites, which unleashes the full power of Defensics on any protocol or file format. All you need to do is provide a data model. You can then create a full-fledged Defensics test suite and leverage the powerful generational test case engine as well as all the other features provided by the Defensics platform.

Bitcoin is a cryptocurrency, which means it’s a currency supported by the mathematics of cryptography. Instead of being centrally managed, as government currencies are, a cryptocurrency is managed by the community, using a peer-to-peer network. Bitcoin and other cryptocurrencies are based on a blockchain, which is a cryptographically protected list of all transactions. All peers in the network have a copy of the blockchain, which is cryptographically protected from tampering. The peers in the network use algorithms to agree on adding new transactions to the blockchain, allowing the entire network to come to a consensus about transactions without having to trust each other.

Cryptocurrencies are relatively new. Bitcoin was the first; it was introduced in 2007. Despite the relatively experimental nature of these currencies, significant value is invested in them. At this writing, the market capitalization of Bitcoin is over $350B.

For the purposes of this article, you don’t need to know too many details about Bitcoin or any other protocol. All you really need to know is that Bitcoin peers run a process called bitcoind. The peers in the network exchange information using the Bitcoin network protocol.

This could be much simpler

If you just want to get bitcoind running so you can test it, you don’t need the virtual machine and Docker containers I’ll outline below. You could simply download the Bitcoin package, and then run bitcoind -regtest.

Setting up the test bed described below has some advantages.

The first step in fuzzing bitcoind is to create a test bed, a safe place where you can perform fuzzing without hurting anything. Fuzzing should never be performed on production systems, as it’s likely to cause failures or trigger security alarms.

Bitcoin supports the production network (mainnet), a test network (testnet), and a regression test network (regtest). For fuzzing, I used the regtest network, as it allowed me to set up a private, isolated Bitcoin network, perfect for fuzzing.

I began by creating a virtual machine that holds my regtest peers, fleur and viktor. I used Ubuntu 20.04, but any Linux will do. This step is not strictly necessary—you could just create the Docker instances directly on your host OS—but I wanted the extra layer of isolation.

Through the magic of Docker, ports on the virtual machine are mapped to ports on the fleur and viktor containers. When it’s all up and running, it’ll look like this: 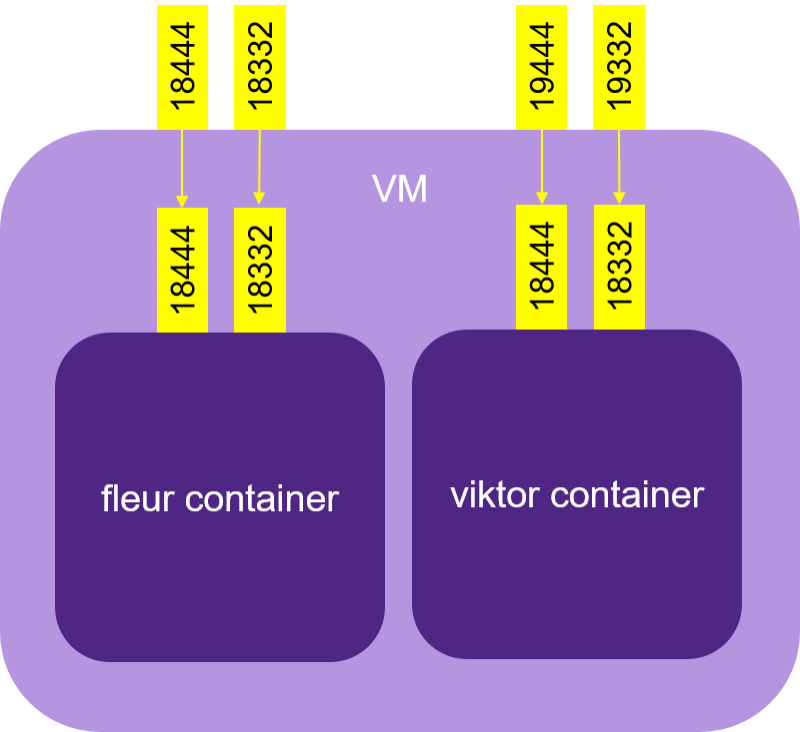 Starting with the newly installed Linux machine, I first installed git and docker:

To get the most up-to-date Bitcoin protocol dissector, I installed Wireshark like this:

After that, you can use my scripts to create and use a Docker container that runs bitcoind. (Thank you to Gerald Kaszuba for providing the inspiration for this approach.)

The run build.sh to build the Docker image:

The container image is very simple, little more than a base Ubuntu image plus the Bitcoin binaries. The script downloads the latest version, which is Bitcoin 0.20.1 as of this writing. If you want to change the version, edit bitcoinzz.docker to specify whichever version you like.

Using two separate terminal windows, you can spin up two instances of the container image with run_fleur.sh and run_viktor.sh.

The Bitcoin daemon bitcoind is automatically started in the container, and an alias rt is created for bitcoin-cli -regtest. This means you can use the alias to pass commands to bitcoind and get information:

You have two running bitcoind instances, but they don’t know about each other.

If you want to prove that they work together, run Wireshark and listen on the docker0 interface. Then point one of the bitcoind instances at the other using its IP address.

I found the IP address of fleur using hostname:

Then I told viktor’s bitcoind about fleur, like this:

This rewarded me with a flurry of Bitcoin messages exchanged between fleur and viktor’s bitcoind processes. 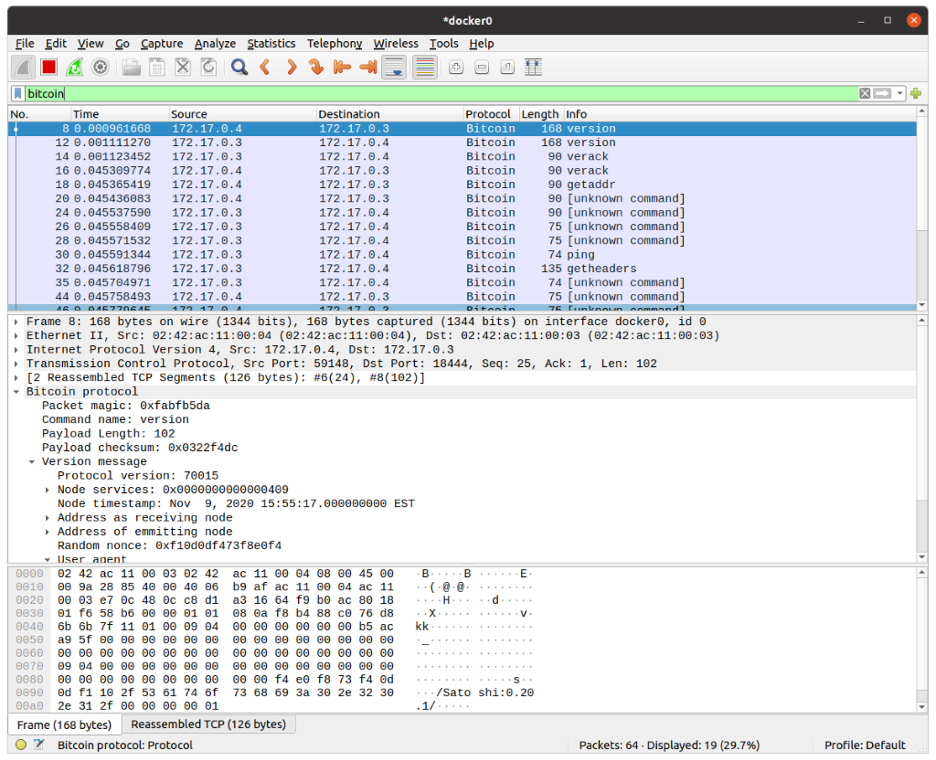 Congratulations! You have your own private Bitcoin network!

Come back next time when we’ll build a model for the Bitcoin network protocol, and then use that model in the Defensics SDK to perform fuzzing on bitcoind.

Have questions about the Defensics SDK?

The Software Integrity Community has answers.