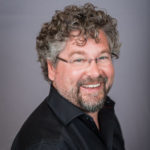 From mainframes to connected cars: How software drives the automotive industry

Why the FTC’s software security stance matters to your business

The 10 commandments for software security Badness-ometers are good. Do you own one?