« Previous: When software is the company,…
Next: Duck Talks: 20 billion reasons… »

At the 34th Chaos Communication Congress (#34C3), life-forms descended on Leipzig to encourage people to use technology to make the world better. Or TUWAT.

It was the night before the 34th Chaos Communication Congress (CCC, #34c3 or Congress), and we had already been travelling for most of the day. A bus from Belfast to Dublin, a flight from Dublin to Berlin, and finally a train from Berlin to Leipzig. We were exhausted. But there are such things as rituals to uphold, and so we dutifully (albeit sleepily) piled into a tram and rattled our way to Congress Centre Leipzig (CCL) in an effort to get a jump on procuring our wristbands, hopefully preempting most of the fifteen thousand hackers that were expected to descend upon the city the following day.

This was the first year that Congress was hosted in Leipzig, having already made the jump from the three-thousand capacity venue in Berlin to the twelve-thousand capacity Congress Centre Hamburg (CCH) that I personally know and love. We were a little worried that the increased number of delegates would rob Congress of something. In Hamburg, it had managed to feel cosy, despite the thousands of attendees. I have fond memories of sitting encamped near a handily positioned bar on a carpeted landing watching the crowds go by with friends. Nowhere ever felt too big, or too open, and the only talk we ever had a hard time getting into was the keynote. Would adding an extra thousand life-forms to the event tip it over the edge? Would it just start to feel like a European DEFCON?

Our anxiety prickled as we walked through the front door of the cavernous building that is the CCL. The first thing that struck us was the sheer size of the venue. Its central glass hall is enormous. At 80 meters wide and 243 meters in length, it could comfortably house three Airbus A380s nose to tail. This was a far cry from Congress Centre Hamburg, and while it was unarguably architecturally impressive, it was not what we had come to expect from Congress. Even ‘The Heart of Gold’, Congress’ iconic spaceship, looked small in this venue. What also got us worried was that there were already more than a hundred people standing in line for wrist bands at 11:30pm the night before Congress started. Alarm bells started to ring.

Thankfully, it didn’t take us long to get our wristbands and we went inside to get our first glimpse of what #34c3 would hold. One of the coolest things about CCC are the assemblies. Groups will come from all over the world to stake a claim over some small part of the assembly floor, and set up anything from a table full of laptops to full on installations. From previous years, we knew what to expect: a densely packed hall full of robots, contraptions, gadgets, vintage computers, 3D printers, soldering stations, projectors, lasers, and enough LEDs that, if piled together in one spot, would probably be visible from space. And even though this year the assemblies would be hosted in a hall with a little over 20,000 square meters of floor space, it still felt like the CCC we had come to know and love. I wish we had pictures. But we don’t. That is not encouraged.

We had a victory beer, then returned to our hotels. The following morning, we were rewarded for our perseverance the previous night. The queue was absurdly long and snaked far beyond the door into the congress centre. We sauntered merrily past, and had a quick scout around before heading for our first talk. Again, anxiety prickled as we met with a queue. This was very un-CCCish. Until we realised that the keynote was currently underway. We relaxed a little. That was normal. And as it turned out, bar a talk which included a video-linked appearance by Ed Snowden, we didn’t have to queue for much (apart from food, and bathrooms, and ATMs, and beer). It was definitely bigger, but it was still definitely CCC.

But what actually is CCC?

For one thing, it’s much more than a ‘hacker’ or ‘security’ conference. It is a community get-together. Deliberately positioned in the last week of December, the timing of Congress alone has the effect of filtering out a good chunk of potential delegates. Those who have families (and want to come to Congress badly enough) bring their families. And it is a family-friendly place. One whole section of the assembly floor was given over to small humans, who happily whiled away their time building gigantic structures from the tens of thousands of building blocks that littered the floor. Or careened down specially constructed ramps on pedal cars. Or drew pictures and had them animated on giant projection screens for all to see, raced each other around a specially constructed scooter-friendly racetrack, clambered over climbing frames, or interacted with augmented reality games and sculptures. It looked like fun. And essentially, whether aged three or thirty-three, we were all there to play with cool toys and spend time with our friends.

Congress has been running for thirty-four years, and the Chaos Computer Club itself was founded back in 1981 in the offices of the newspaper Die Tageszeitung by security activist Wau Holland. The club rose to fame by hacking Bildschirmtext, a service similar to the UK’s Prestel. The group exposed several security flaws, and in doing so debited DM 134,000 from a Hamburg bank to the club’s own accounts. They returned the money in front of the press the following day. This combination of activism and pranksterism was derived from the hacker ethic of 60s and 70s that arose around MIT’s Tech Model Railroad Club, and the AI lab under Marvin Minsky. The ideals of the Chaos Computer Club are exactly those that Steven Levy summarises in the preface of his book Hackers, which details the story of those early pioneers. Theirs was a time shortly before the rise of the mega-corporations that dominate the tech landscape today, when sharing, openness, decentralisation and free access to computers seemed like achievable goals.

You won’t find the familiar logos of any tech corporations at CCC. Unless they are being resoundingly mocked. This is a corporate-free environment. The kinds of organisations who get booths or assemblies at Congress are those such as the Electronic Frontier Foundation, Digitalcourage, and Antifa. In some ways, it’s more like walking around Glastonbury than a tech conference. Anarchists, hippies, activists, privacy advocates, artists, scientists, writers and technologists all come together in a melting pot that bubbles away for days. Ideas are born here. Projects are collaborated on by people who might never meet one another outside of an event such as the 34th Chaos Communication Congress (#34C3). Indeed, the theme of this year’s congress was a simple one. TUWAT! Literally, do something.

This post is filed under Security news and research.
Padraig Donnelly
Posted by 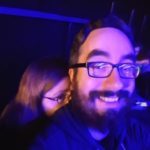 Since completing my undergraduate degree, I have changed trajectory and gone back to doing what I have always loved: messing around with computers. I completed master's degrees in software development and cyber security with distinction. I have become an advocate for privacy and cryptography, and I am an organiser of Cryptoparty Belfast. I attended DEF CON 24 and have attended Chaos Communication Congress two years in a row. I enjoy CTFs. I am currently pursuing my OSCP certification. I write code for fun. I like beer, planes, and once upon a time I was the drummer in a rock band.